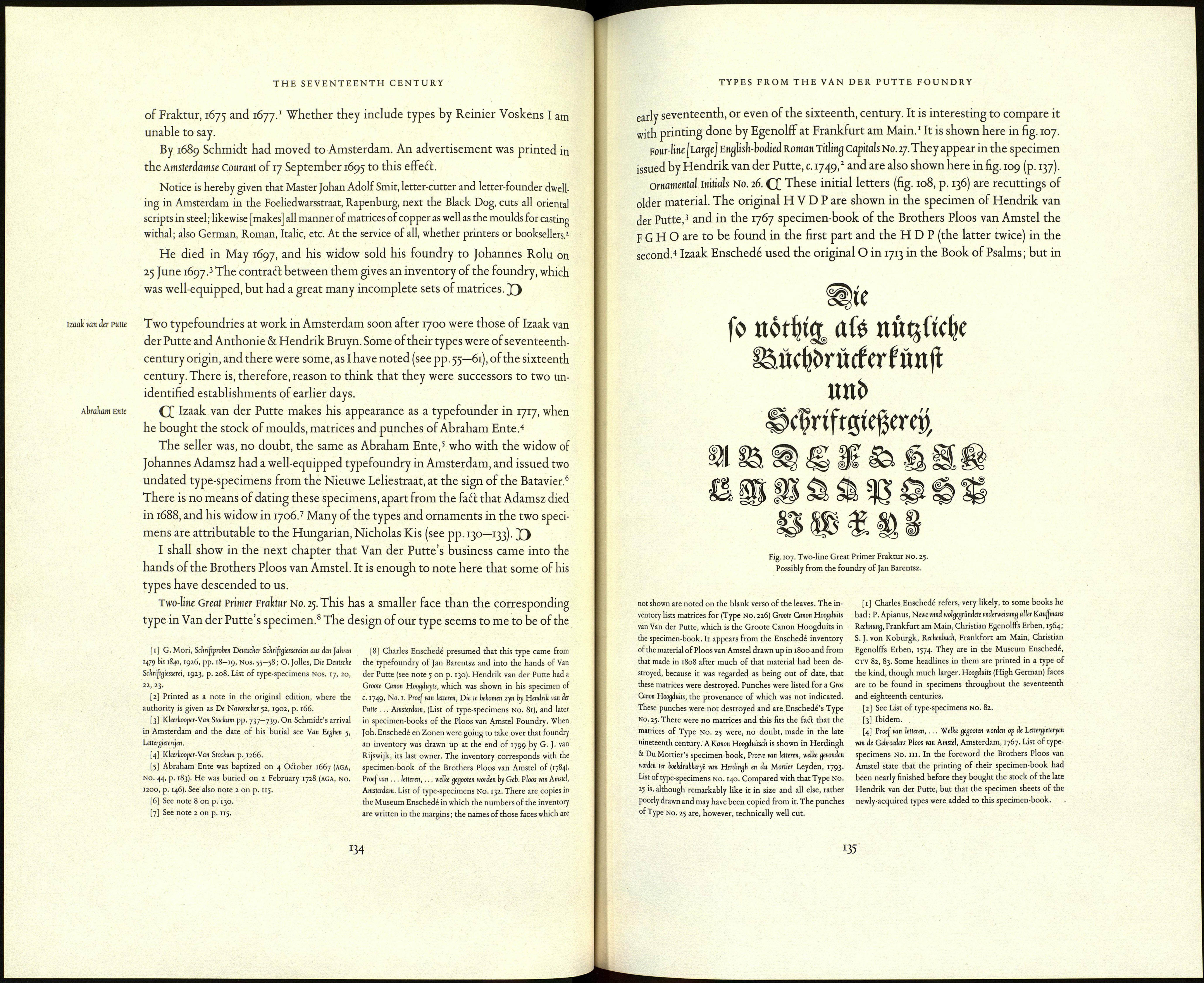 ambitious', with a result very pleasing to the Georgians.: The head of the Georgian
state at the time was Archil, an enlightened 'westernizing' sovereign; but it is his
successor, the King Vakhtang VI, who is credited with the introduction of printing
into Georgia in 1709, a printer being brought from Wallachia.2

The Grand Duke of Tuscany, Cosimo de' Medici, wishing to establish a model
press and typefoundry at Florence, sent agents to the chief centres of printing in
search of men and material. Kis says that they came to him in Amsterdam and
bought matrices from him for 11,000 guilders; but he declined the ofFer of em¬
ployment in Florence supervising the initiation of the foundry. He must have paid
an unhappy visit to England, for he apostrophizes the country in a Latin couplet
meaning: 'Anglic land, that wert my prison and my hell, how can I call thee an
angelic land?'3

The archives of the City of Amsterdam preserve three contracts by Kis. The
first, dated 23 March 1684, is for delivery to Salomon Benediftus of matrices for
Small Pica and Brevier Roman and Italic, and four sets for Hebrew: a Canon with
and without dagesh, Paragon with dagesh, Great Primer with and without dagesh,
and a German-style Hebrew.4 One condition was that Benediftus would do his
utmost to secure a safe passage for Kis through Poland on his way to Transylvania,
at that time a sovereign (and Protestant) principality. Another, of 6 February 1685,
was with Simon de Maly, merchant of Amsterdam, for the supply of a punch and a
matrix for every character shown—and not crossed out—on a specimen sealed to
the minute of the aft: the types to be tried and approved by the Athias Foundry.5
The third is referred to in depositions made in 1694 as a bargain made eight or nine
years before between Matteo Joannes, Armenian and printer, and one Nicolaas
otherwise den Onger (the Hungarian) for the making of a set of punches, matrices,
and types.6

Kis writes that he quit Holland for home in 1689, and on his way left a set, with
certain defefts, of his matrices at Leipzig.7 A nobleman in Poland regarding him
as a heretic confiscated his belongings. Kis, however, succeeded in retrieving his

[5] Kleerboper-Van Stocbm p. 11. The specimen is not annexed
to the aft in the archives of the City of Amsterdam.

[6] Kleerboper-Van Stocbm p. 774. In the same aft the name
Nicolaas Kis is given in full.

[7] N. Kis, Mentség, p. 58. The history of the so-called Janson
types goes back to a specimen issued, it is believed about 1720,
by the Ehrhardt Foundry, successor to Anton Janson, at
Leipzig, where they are headed Verzeichnisz derer Holländischen
Schriften (See List of type-specimens no. 50). The Small Pica
Roman is out of keeping with and looks older than the rest.
See S. Morison, Leipzig as a Centre of Typefounding, Signature n,
1939; A. F. Johnson, The 'Goût hollandois', The Library, 4th
ser. 20, 1939-40, pp. 180-196; reprinted in Selected Essays
pp. 365-377. J. W. Stauffacher, On the History of the psendo-Janso«
Types or Old Dutch Face, in Janson: a definitive Collection, 1954,
pp. 1-8, in which the Ehrhardt specimen mentioned-above,
the Kis specimen, and the Janson specimen of 1678 are repro¬
duced on a reduced scale, but Janson's specimen of 1674 in
in its original size.

punches and subsidiary equipment, and the stock of his Bibles. He spent the re¬
mainder of his life, which ended in 1702, working against difficulties as a master
printer and typefounder in Kolozsvár, regretting the amenities of Amsterdam and
the lack of regard for his craft among his countrymen.

If it is correft to attribute the Janson types to Kis, he was one of the best and
perhaps the last of those working in the Dutch convention.

The other foreigner known to have worked in Holland, Johann Adolph Schmidt, joknn Adolph
was also a very skilful punchcutter and influential as a designer. He lived the greater scIlffli£,t
part of his life in Germany and presumably was a German. Proofs of twenty type¬
faces attributable to Schmidt's foundry are preserved in the Bagford Collection.1
Among the types belonging to Joh. Enschedé en Zonen there is one ascribable to
Schmidt on the ground of its identity with that in one of those specimens. It is the
Hebrew cast on Long Primer without points or on Great Primer with points of the
successors to Athias's foundry (see p. 108), being N0.619 and No. 635 of the Enschedé
inventory.2

There are hardly enough surviving types by Schmidt to represent his accom¬
plishment or give a clear idea of his style. But such as there are and his specimens
suggest that in delicacy and precision of cutting he excelled in his day, and that
he led typographical taste away from a calligraphic towards a mechanical fashion
of letter-design, later to be further popularised by Fleischman. Schmidt specialised
in the cutting of Greek, Hebrew and exotic faces; his was the first Cyrillic type in
England,3 and he cut a Samaritan.4

Schmidt is said to have learnt the trade of typefounder in the Luther Foundry.
In Frankfurt am Main he appears also to have managed the business of Reinier
Voskens's widow. So much may be gathered from a handwritten note at the foot
of the only known specimen of Voskens's types, meaning: 'This foundry has now
been taken on again by Johann Adolph Schmidt at the house of Elisabeth, Voskens's
widow, typefounder and letter-cutter, dwelling in the Bockgasse at the sign of the
Cornflower'.5 Gustav Mori listed four specimens by Schmidt issued after he had
set up on his own in Frankfurt : one, of ornaments, is undated and believed by Mori
to be of 1670 ; another, of learned and exotic types, is dated 1674 ; and there are two

[1] London, British Library, Harl. 5915, leaves 141 verso, 144,
(reproduced in Type Specimen Facsimiles 1, Sheet No. 14. List
of type-specimens No. 33.) One of the cuttings shows a Pica
Italic with the printed note Gesneden door Meester Jan Adolf Schmid,
Letter-gieter tot Amsterdam, op Rapenbtirg in de Foely dwaers-straat (Cut
by Master Jan [Johann] Adolph Schmid[t], letter-founder at
Amsterdam, Rapenburg, in the Foeliedwarsstraat). The price
is added in handwriting, and similar handwritten prices are
to be found on other cuttings, which therefore may be pre¬
sumed to show types offered (and cut?) by Schmidt.