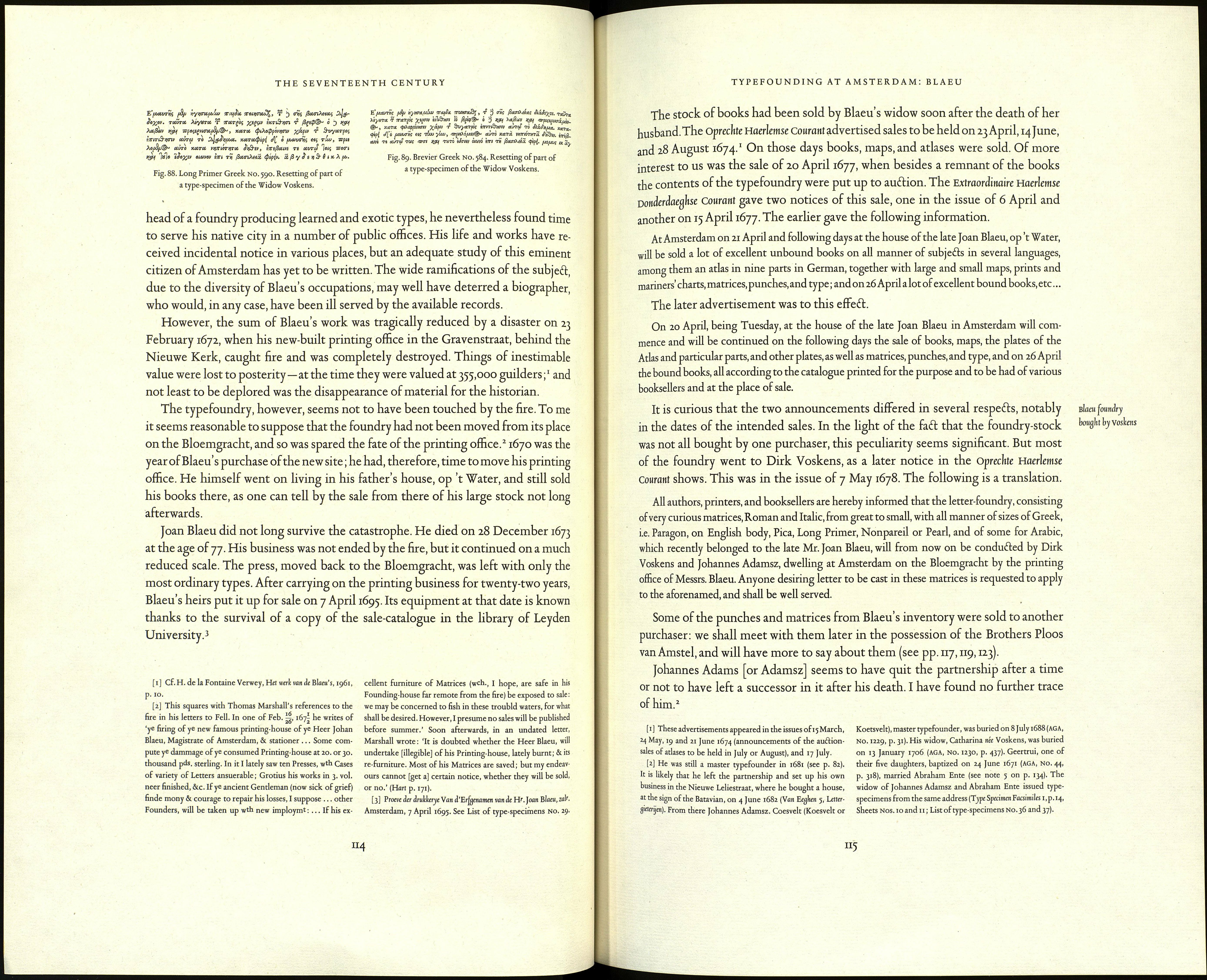 research which is needed for a proper appreciation of the varied activities of the
several generations of Blaeu. Such a study would contribute much to the history
of printing in Holland; for, if perhaps Canon Joly's praise was exaggerated (see
p. 108), no doubt Willem Blaeu and his son Joan carried the typographic art to a
higher pitch than their contemporaries, not excluding, in my opinion, the famous
Elseviers, of Leyden.

Willem Jansz. Blaeu, born at [Uitgeest in North Holland or at] Alkmaar in 1571,
is first heard of as a printer at Amsterdam in 1605. When he began his typefoundry
is not known; but it may be assumed that he had his own punches and matrices at
an early stage of his career. There are traces of his dealings in 1624 with the punch¬
cutter and typefounder Nicolaas Briot.1
Nicolaos Briot Nicolaas Briot is known to have been a goldsmith at Gouda in [1613], and in [1615]

he also had a well-equipped typefoundry.2 So much appears from his undertaking
on 29 March of that year to supply 200 lb. of Ruby Roman and 100 lb. of Pica music-
notes to the Amsterdam printer Dirk Pietersz. Voskuyl within about three months
at the price of 32 stivers a lb. Voskuyl wanted the founts for a book in the French
language, and to improve the prospects of the book he imposed on Briot a con¬
dition against casting more of the same types, [or any smaller than Pearl,] within
two years.3

On or soon after his marriage to a daughter of Jan Adriaansz. de Vos,« Briot
moved to Amsterdam, where he is found on 3 April 1624 living in the Dijkstraat.
This was the date of his agreement to supply Willem Blaeu with divers punches,
matrices, and moulds. Another such contract followed on 29 August 1625.5 Pre¬
sumably the beginnings of Blaeu's foundry may be dated at this time. But there
were troubles at the start.

Before long Blaeu found out that Briot was not treating him fairly. On 8 De¬
cember 1626 Dirk Jansz. van der Goude, journeyman letter-founder, deposed that
he had seen Nicolaas Briot, in whose house he was then living, occupied during
the previous winter in making matrices for a Nonpareil Roman on Blaeu's account.
They were not finished in January, when Van der Goude left. The deponent had
also seen Briot casting a small Greek type for Paulus van Ravesteyn and for an
English printer at Delft in matrices which Blaeu had commissioned for his own use.

p. 152. About 1612 Nicolaas Briot justified a set of matrices for specimens No. 29). which cannot be found elsewhere, he was

shows a Black Letter on the very small body of Diamond 1457.

Letter of the late Nicolaas Brifotj). The last letters are torn [5] These contrafts are cited in the arbitration of the dispute

away. This specimen is in the British Library, Baojord Collection, between Blaeu and Briot's widow (see the following note).

work. The founder having died, his widow claimed payment.1 Blaeu persisted in
his refusal, and by agreement the case was referred to arbitration. G. Schaep, Pieter
Opmeer, Hendrik Laurensz, Dirk Pietersz. Pers, and Broer Jansz made an award on
16 February 1627 to this effect:

that Blaeu should pay the widow for 17 sets of matrices and moulds 1,056 guilders
and [the rest of the amount due for Arabic and] Greek type

and that Blaeu might deduct for certain [moulds] missing [etc.] 102

for advance payments I02:12

lastly, that the Widow Briot should deliver the punches for large music-notes as

far as she could.2

In 1636 Willem Blaeu took his two elder sons, Joan and Cornelis, into partnership.
His business had grown very much, and new premises were needed for his printing
and typefounding. In 1637 they were moved to the Bloemgracht, the bookshop
remaining at the old address, op 't Water'. But the demands of the press had out¬
stripped the capacity of the foundry; and Blaeu, as was to be expected, went abroad
for supplies. Being in the habit of going to the Frankfurt fair once or twice a year,3
he was able to order type from the Luther Foundry without troubling to write for
it. Several of the types shown in the Luther specimens are to be found in Blaeu's
printing; and, no doubt, he bought matrices as well as type from his German
colleague. The range of Blaeu's Greek founts described in an advertisement by
Voskens in 1678 (see p. 115) came from Frankfurt, excepting the Pearl commissioned
of Nicolaas Briot. Confirming this view, based on the correspondence of Blaeu's
series of Greeks with those in the Luther specimen [of 1670], is the fact that when
Voskens's stock was auctioned in 1780 only the Pearl among the Greek types had
punches.

Willem Jansz. Blaeu died on 21 October 1638. His sons, Joan and Cornelis, carried
on his work. But Cornelis dying in 1642, Joan was left alone in charge of this great
enterprise.

The accomplishments of Joan Blaeu were truly remarkable. Doctor of laws, a
mathematical scholar, justly celebrated as a geographer (his maps and globes being
in use even now), printer and publisher of theological books and good literature,