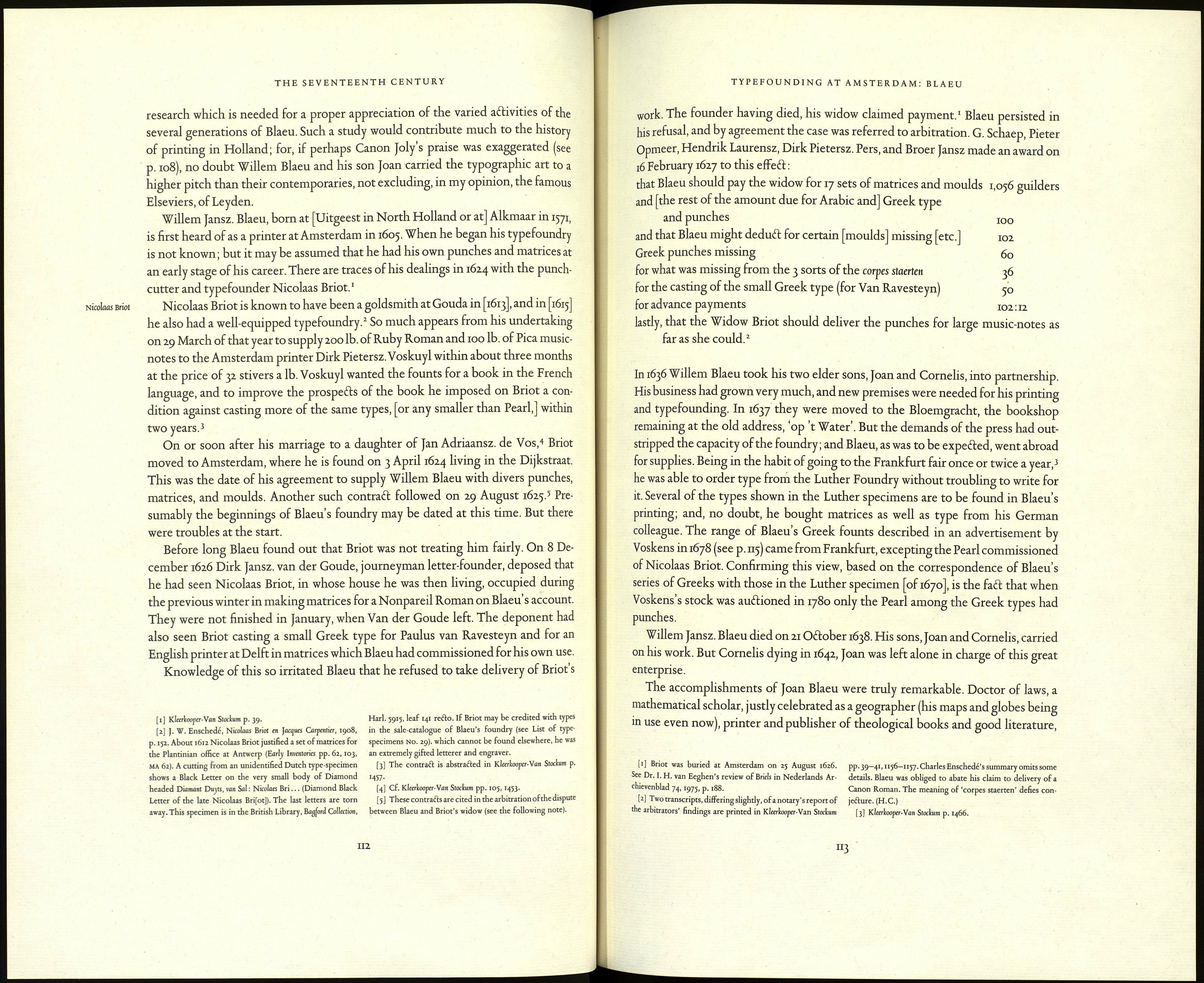 Dr. De Roe ver's notes enable me to give some facts about the two foundries that
were absorbed by the Voskens firm.
щш valid Jacques Vallet was born in Geneva [in 1602 or 1603], ' and seems to have settled

in Amsterdam about 1643 as a letter-founder on the Prinsengracht.2 On 11 March
1645 he contracted with John Collet, a London punchcutter, for a set of punches for
small German letters at the price of twenty-two stivers a punch. The work must have
been wanted urgently, for there was a condition that Collet might not work for
another customer until he had delivered the punches to Vallet. Probably the type
was for Joachim Nosch, an Amsterdam printer,3 who produced many books in
German and is recorded as doing business with Vallet.

Nosch was a friend of Vallet: he witnessed indentures binding Jan Hendriksz to
Vallet as apprentice-typefounder in November 1646.4 At that time Vallet had two
other men working for him: Johannes Rombouts and Johannes Selters, both en¬
gaged in August of that year. The next year he took on Jan Jansz, whom we found
employed in Van Dijck's foundry in 1648. There are signs that Vallet had fairly
ample means and prospered in his trade. After his marriage in 1648 and his removal
to a new house in the Pieter Jacobsstraat, he bought the typefoundry of Jan Frede-
ricksz. Stam on 26 May 1650 for 5,000 guilders.5 Stam was a well-know Amsterdam
printer during the years 1629 to [16646] : it was he who printed the first regular coranto,
that of Jan van Hilten, which began in 1635.7

Jacques Vallet is mentioned in 1664 as tenant of a house on the north side of the
Achterburgwal. In 1667 he undertook to cast 350 lb. of Nonpareil Roman and Italic
for Joseph Athias. The price, 32 stivers a lb., was low for the time, but Athias stipu¬
lated for it because Vallet had sold the widow of Paulus van Ravesteyn the same
weight of type a year before at that price. Orders of such a size are an indication
that Vallet had a fair number of employees, and one of his later deliveries is further
proof of it. He agreed to cast a fount of Minion on Nonpareil for the account of
Jan Jacobsz. Schipper for setting a i2mo Bible [in English], to be printed presumably
by Blaeu, for delivery was to be made to him.8 On 9 November 1673 there were
4,020 lb. of Nonpareil in his shop worth 6,432 guilders. However, the year given in
Dr. De Roever's notes as 1673 should certainly be 1671,9 for shortly before 1673 Vallet
died in England,' ° and the advertisement quoted below is evidence that his foundry

[2] Vallet worked probably already in 1637 f°r tne widow [7] An incautious statement; but the subjeft is too big for

admitted to the booksellers' guild of Amsterdam on 20 Ofto- [9] Kleerboper-Van Stocbim p. 687.

by instalments over 12 years. exhausted the information to be gleaned from the Marshall-

was inactive for a time and started work again on 19 December 1673. Moreover,
one of Dr. De Roever's notes shows that when the fount of Nonpareil was ready
for delivery Vallet also supplied the widow of Jan Jacobsz. Schipper with Roman
and Italic for a Bible in English to be printed by Keur at Dordrecht.1 The Widow
Schippers succeeded to her husband's business in 1671.2

This is the effect of the announcement printed in the Oprechte Haerlemse Courant
of 19 December 1673.

All authors, printers, and booksellers are hereby informed that the letter-foundry left by
the late lamented Jacques Vallet, which has been at a standstill since his death until now and
is at present in the care of Johannes Adamsz, dwelling in Amsterdam in the Elandstraat next
to the Old Three Perches, and Dirk Voskens on the Bloemgracht next to the printing house
of Joan Blaeu, is once more taken in hand, and is ready to accommodate anyone needing its
services. If, then, anyone desire to have anything cast to his liking, let him address the aforenamed
and he shall have good, fine work.

The advertisement shows that Dirk Voskens was associated in business with
Johannes Adamsz3 and that he lived on the Bloemgracht beside Joan Blaeu's office,
perhaps in the very house that had once been occupied by ChristofFel van Dijck.

The second of the foundries managed by Voskens was that of Joan Blaeu, who
had succeeded in 1638 to the business of his father, Willem Jansz. Blaeu.4

A detailed account of this family would by far exceed the scope of this book,
and I must confine myself to their typefoundry. The information to be had about
it amounts to very little. I only hope I may provide a starting point for more

the following information : 'Jacques Valett, a letter-founder,
born at Geneva. .... He is aged above 60. has liv'd in London
7. years, & followed his Trade about 30. years in this City
[sc. Amsterdam]. He undertakes to justify Matrices, but not
cut Punitions : He orders the business of his [Foujndery (as
they call it) & his servants cast letters' p. 167). He had supplied
type to printers in London and Cambridge, because Van Dijck
was, 'it seems, too high & dear for such to imploy' (p. 166).
Marshall sent to Fell 'a large Colleftion of Proofes from
Jacques Vallet, wch shew ye various Sorts of justifyed Matrices
he is willing to sell', with a list of the types, signed by Vallet.
The specimens have not survived, but the list (p. 169) is a
long one, ranging in Roman and Italic from three-line Pica
to Ruby, with a Roman only on Diamond, and including
Hebrew, Rabbinical, Greek, Titling Capitals, Flowers, and
Music. In addition Vallet had various kinds of Black Letter
(p. 170). Vallet agreed to serve at Oxford for a year helping
to set up the typefoundry, provided that Fell would buy all
the matrices in his list (p. 171). A draft reply by Fell accepts
Vallet's terms and adds that 'we here are well pleased that
we haue assurance of a founder' (p. 172). There the corre¬
spondence ends. The name of the founder who reached
Oxford in August 1672 and stayed for a year (State Papers, Dom.
'763. ЗЗ7/357 was Herman Hermansen (Hart p. viii note).
See about his identity Van Eeghen 5, Letter^ieterijen. The corre¬
spondence of the number of matrices in the sets that Vallet

was willing to sell with those that Fell received at Oxford
(Hart p. 159) is so close that it can hardly be doubted that nine
sets for the Fell types came from Vallet. They were a small
part of the whole that Vallet offered. The sample of Vallet's
stock now at Oxford is of various origins: Garamond,
Granjon, and Haultin are among the artists responsible for
them. Since he was not a punchcutter, the design of his types
was necessarily heterogeneous. Marshall thought his types
'plainly inferior to Vandijkes (Hart p. 166), but they were
cheaper'. No other founder at that time is known to have sold
type on Diamond body (Reed p. 36). See further on types sup¬
plied by Vallet to Fell: S. Morison, John Fell, 1967, pp. 67-68,
139,142,143,145,146,195,197.