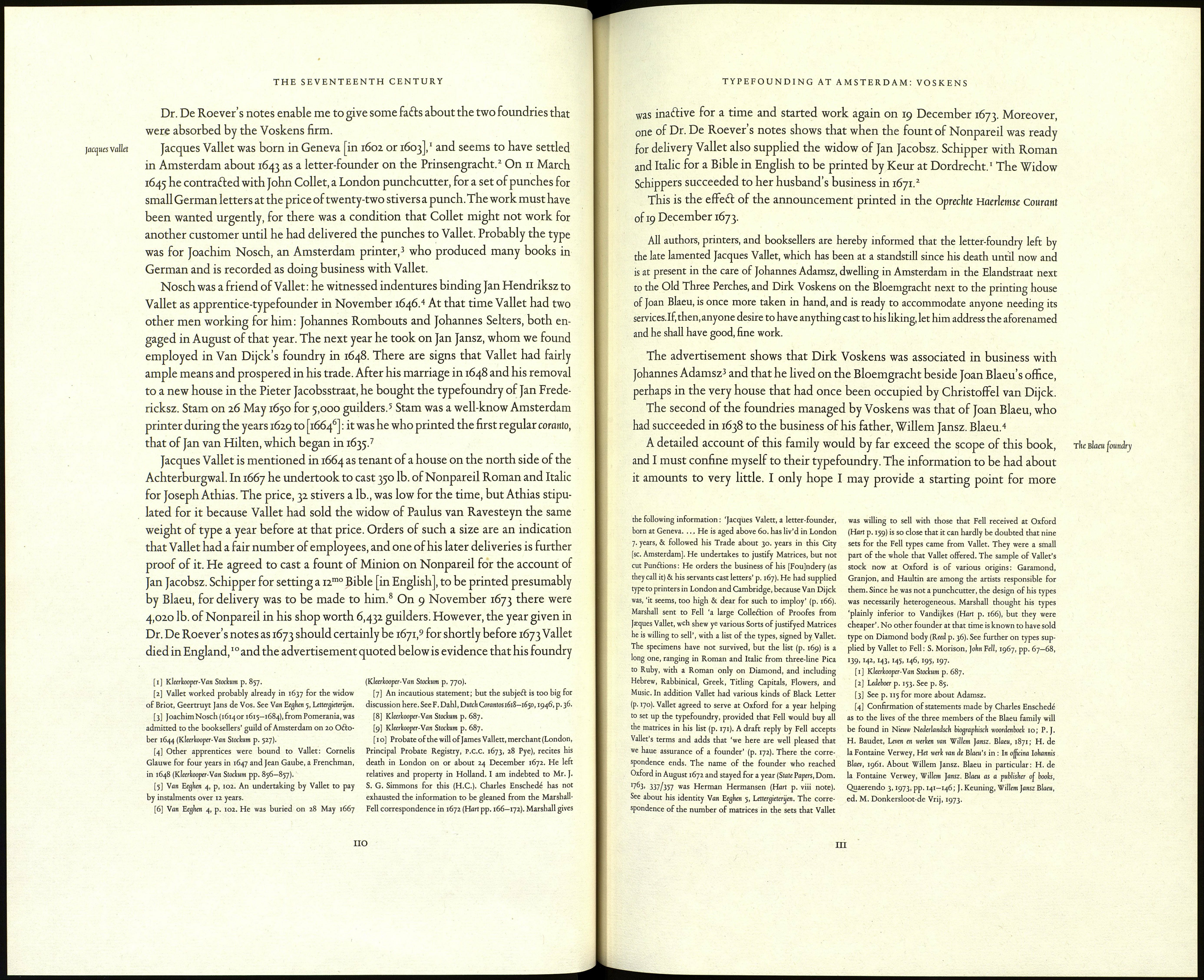 Long Printer Hebrew without points No. 619. [We have the Hebrew type previously men¬
tioned as an addition to the stock of the foundry derived from Van Dijck.1] A
specimen of this type is given in fig. 86 ; and of the same face cast as Greot Primer Hebrew
with points No. 635 of our inventory is shown in fig. 85.

тііе vosbts At much the same time as Van Dijck members of the family of Voskens were
¡oundry typefounders in Amsterdam during the second half of the seventeenth century.
Their firm lasted until 1780.2 Printing during the intervening time shows that most
Dutch type came from the Voskens Foundry. It must have had a high reputation
among the printers of that day; yet I cannot give an adequate account of it. The
extent to which writers on printing and printers negleci: typefounding is always
surprising: they seem not to understand that a piece of printing begins with the
making of its materials. I could recite a list of authors full of admiration for the
part played by printers in Holland's 'Golden Age', but with never a word for those
whose skill and taste enabled the printers to win their renown.

One example will be enough to illustrate the point. Willem Jansz. Blaeu and his
son Joan had a typefoundry annexed to their printing office, and their business was
famous at home and abroad. In 1646 Canon Joly, in the train of the Duc de Longue-
ville, came to Amsterdam and visited Blaeu's office. He wrote that it was considered
the finest in Europe and he adds that it had all kinds of type, even for oriental
languages, which was cast on the premises.3 When, after living there twenty-two
years, the German Philipp von Zesen wrote a description of Amsterdam in 1664,
he devoted several paragraphs to Blaeu's workshop, but of the typefoundry he only
says that therein the types for many languages are cast.4

A better account of letter-founding would add much of value to the typo¬
graphical history of Holland, and since the house of Voskens has associations with
several of the types in our colleftion, I will give such information as I have about it.
Most of it I owe to the searches of the late Dr. N. de Roever in the records of the
City of Amsterdam.

All I know of the origin of the Voskens typefoundry is that the brothers
Bartholomeus and Reinier Voskens1 entered into partnership by an agreement
dated 21 May 1641 for making punches, matrices, and moulds towards a letter-foun¬
dry which they meant to establish. Soon afterwards Reinier seems to have left the
business. In 1646 Bartholomeus Voskens alone is mentioned as a typefounder. He
must have done a good trade, to judge by the use made by Dutch printers at that
time of types attributable, as the specimens in our possession show, to Voskens.2
(J¿ Bartholomeus was at Hamburg at some time between 1655 and 1667, and there
he issued an undated specimen.3 In it he describes himself as 'Schrift-schneyder
und Giesser' (letter-cutter and founder). He died in the winter of 1669—70, leaving a
son with whom Thomas Marshall treated on behalf of Dr. Fell in search of matrices
for Oxford University in 1670—7z.4 J) An advertisement in the Oprecke Hoerlemse
Courant of 19 December 1673 announced the amalgamation of the foundry of Jacques
Vallet with that of Voskens ; and another of 7 May 1678 says that Voskens had
taken over the management of the foundry of the heirs of Joan Blaeu. By that time
Dirk Voskens, the son of Bartholomeus, was in charge.5

p. 893). He was married to Maria Hendricks and had several specimen (List of type-specimens no. 16; Type Specimen Fac-

children, the eldest of whom, Catalina (Catharina or Katarina), similes 1, Sheet no. 7). His business at Frankfurt was carried

younger brother Dirk (and a sister Mary) were baptized on after the death of the son of Bartholomeus, and probably

buried at Amsterdam on 18 December 1669. Dirk Voskens, older ones. Nicholas Kis, the Hungarian, who learned to cut

among other children, two sons, Bartholomeus, baptized on Philipp von Zesen and had guidance from his on the design

A daughter, Cornelia, was baptized on 2 June 1648 (AGA, No. [5] The account of the Voskens Foundry is continued