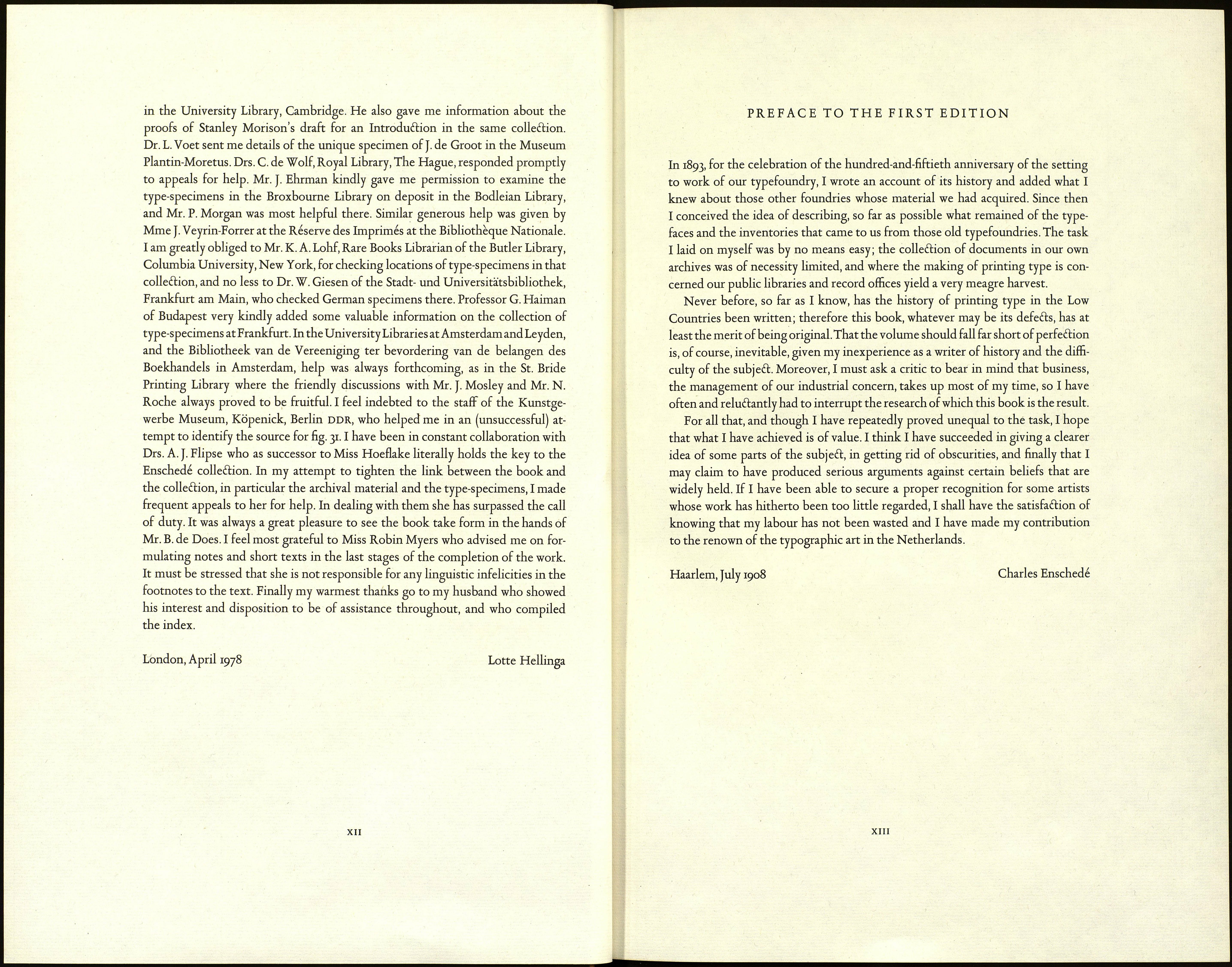 Charles Enschedé, the author of this book, was of the sixth generation of owners
of the firm established in 1703. He was born in 1855, the second son of the fourth
Johannes, his elder brother being the fifth of that name. By a second marriage his
father had a third son, Jan Willem, a librarian of the Haarlem City Library who is
remembered for his writings on bibliography. Charles was educated at Noorthey,
a private boarding school, and at Leyden University, where he took his doctor's
degree in law. He entered the family business in 1883, five years after his elder
brother, and a few years later was put in charge of the typefoundry. The head of the
firm, Jan Justus Enschedé, died in 1887 and was succeeded by the fifth Johannes,
who died in 1911. Charles Enschedé presided over the business until his death
(while playing chess) in 1919. His only child was a daughter, who did not marry.

Besides this book Charles Enschedé has another substantial volume to his
credit: De Lettergieterij van phannes Enschedé en Zonen; Gedenhchrift, a history of the firm's
typefoundry printed for the celebration of its 150th anniversary in 1893. It was not
put on sale, and being in Dutch has not become widely known abroad. It is, how¬
ever, still the only printed history of the business during the nineteenth century,
a period of interest especially for the making of exotic types for the East Indies.

Of less interest now are three monographs of his on the Gutenberg-Coster
controversy printed in Dutch, whose titles may be rendered as A Technical inquiry
into the Invention of Printing (Haarlem 1901), Gutenberg's First Printed work, according to Otto Hupp
(Amsterdam 1902), and Laurens Janszoon Coster the Inventor of Printing: о Sequel to ' A Technical
inquiry etc.', (Haarlem 1904). The latest of his publications was one in German, a text
which served as copy for the firm's specimen of Fraktur and Schwabacher types
issued in 1919. It was translated into English by the late Mr. A. F. Johnson as 'The
Elzevier Press and its Relations with the Luther Type-Foundry', and the translation
was printed in signature 10 (1938).

Enschedé's views on the earliest techniques used in typography and on the
role of the Luther Typefoundry as a supplier of type to the Northern Netherlands
are sufficiently expressed in this book and are criticized in the footnotes. As a
history of typography in the region its earlier chapters must now be read in con¬
junction with more recent works of wider scope and more scientific in method,
especially Professor and Mrs. Hellinga's The Fi|teenth-Centurv Printing Types of the Low
Countries (1966) and Dr. H. D. L. Vervliet's Sixteenth-Century Printing Types of the Low Countries
(1968). As the only history of Dutch typefoundries until the end of the eighteenth
century I hope that the additions made by Miss Hoeflake and me have somewhat
increased its usefulness. Enschedé's work has an enduring value as a catalogue and
display of one of the world's richest collections of typographical treasures.

It will be clear from the preceding introductory words that the Typefoundries as it
is now put before the reader is the work of many hands. The history of the present
edition in translation up to 1974 is sketched by Mr. Carter, but the spirit of
combined intellectual effort has deeper roots in the history of the Enschedé firm.
I did not consider it my task as editor to distinguish the source of every particle
that makes up the whole. The minor inconsistencies which are inevitably the re¬
sult of work born of varying opinions will not, I fear, escape the attentive reader.
Major deviations from Charles Enschedé's text are indicated by (J¿, small cor¬
rections in the text by brackets. Some of the longer additions in the footnotes,
containing some matters of personal opinion and new material, are initialled H.C.
for Harry Carter or L.H. for the present editor. Many of the other notes, especially
those referring to the Enschedé collection and to Dutch archival material, are
Miss N. L. Hoeflake's. In editing notes by other hands I have tried to bring the
literature up to date.

One editorial decision for which I bear the full responsibility, needs some
explanation. The typefaces in the Enschedé collection are displayed in resettings
of contemporary texts or specimens, usually because they had originally appeared
in this form. Thus the type is shown in a lay-out which closely approximates to
the original style, or in the case of type-specimens, in a style that accorded with
the taste of the day and was diftated by commercial considerations. The resettings
cannot give a completely accurate image of the original such as only a photographic
reproduction can provide. I have therefore thought it misleading to emphasize the
original examples and have refrained from indexing or listing them. The types
that are illustrated can all be found via the Table of Typefaces.

A further point that may need elucidation is that the numbers which identify
the types refer to the inventory of the foundry. This archive, which also contains
the record of acquisition by the firm, is not available to the public.

In performing my task as editor I have incurred many debts of gratitude.
Dr. I. H. van Eeghen's generous assistance has enabled the material derived from
the Amsterdam archives to be much more accurate. I am extremely grateful to her
for putting before me her unparalleled knowledge of the business and family
relations of the typefounders in Amsterdam. Where I have been unable to do com¬
plete justice to the wealth of details she gave me, I have referred the reader to the
full treatment in her chapter 'Lettergieterijen' in the forthcoming fifth volume
of her De Amsterdamse boelehandel 1680—1725.

I am also grateful to others who helped me by providing material and practical
assistance. Mr. D. J. McKitterick kindly allowed me to make pre-publication use
of his study on the fragments of an unrecorded type-specimen that he discovered