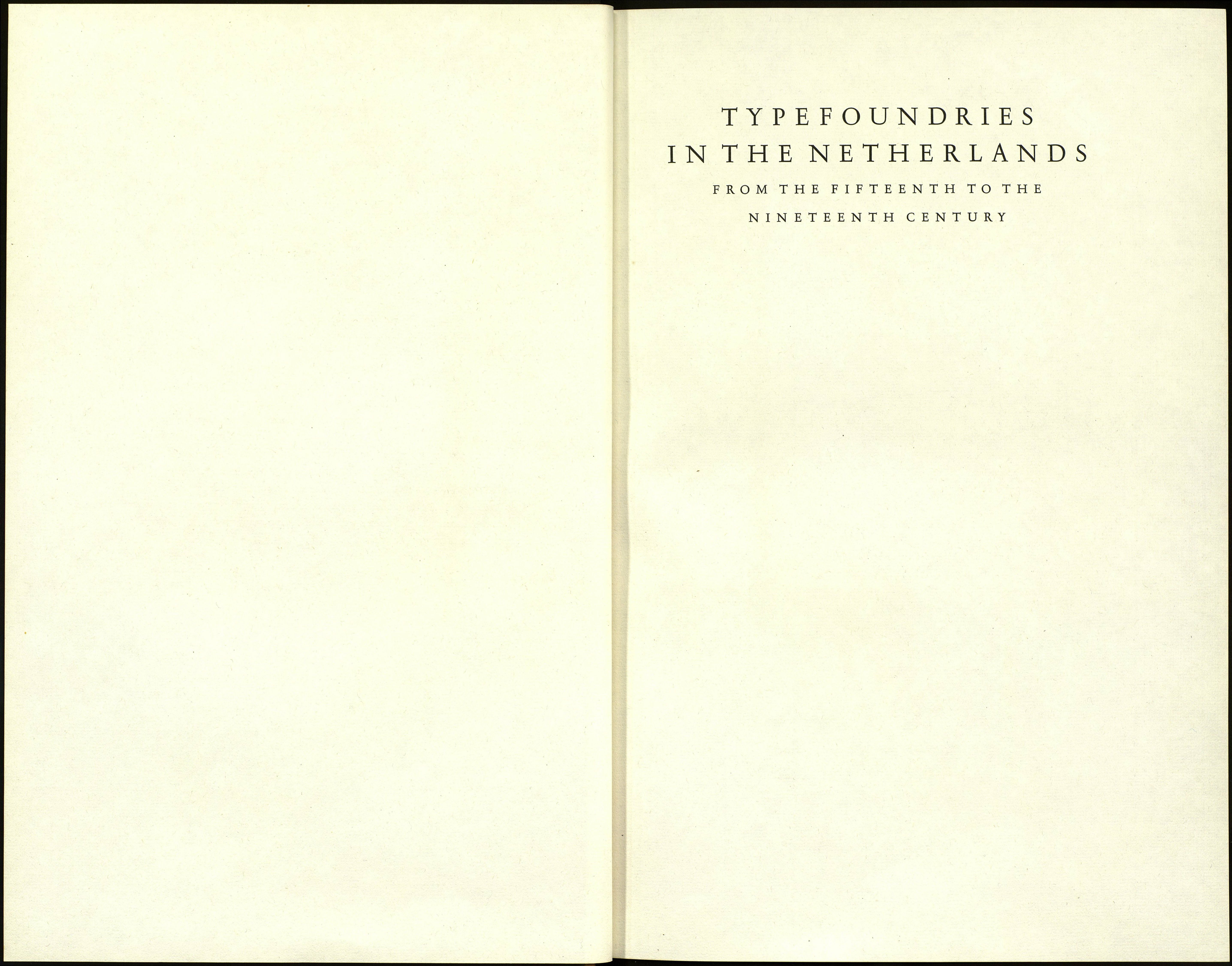 in the University Library, Cambridge. He also gave me information about the
proofs of Stanley Morison's draft for an Introduction in the same collection.
Dr. L. Voet sent me details of the unique specimen of J. de Groot in the Museum
Plantin-Moretus. Drs. С de Wolf, Royal Library, The Hague, responded promptly
to appeals for help. Mr. J. Ehrman kindly gave me permission to examine the
type-specimens in the Broxbourne Library on deposit in the Bodleian Library,
and Mr. P. Morgan was most helpful there. Similar generous help was given by
Mme J. Veyrin-Forrer at the Réserve des Imprimés at the Bibliothèque Nationale.
I am greatly obliged to Mr. K. A. Lohf, Rare Books Librarian of the Butler Library,
Columbia University, New York, for checking locations of type-specimens in that
collection, and no less to Dr. W. Giesen of the Stadt- und Universitätsbibliothek,
Frankfurt am Main, who checked German specimens there. Professor G. Haiman
of Budapest very kindly added some valuable information on the collection of
type-specimens at Frankfurt. In the University Libraries at Amsterdam and Leyden,
and the Bibliotheek van de Vereeniging ter bevordering van de belangen des
Boekhandels in Amsterdam, help was always forthcoming, as in the St. Bride
Printing Library where the friendly discussions with Mr. J. Mosley and Mr. N.
Roche always proved to be fruitful. I feel indebted to the staff of the Kunstge¬
werbe Museum, Köpenick, Berlin DDR, who helped me in an (unsuccessful) at¬
tempt to identify the source for fig. 31.1 have been in constant collaboration with
Drs. A. J. Flipse who as successor to Miss Hoeflake literally holds the key to the
Enschedé collection. In my attempt to tighten the link between the book and
the collection, in particular the archival material and the type-specimens, I made
frequent appeals to her for help. In dealing with them she has surpassed the call
of duty. It was always a great pleasure to see the book take form in the hands of
Mr. B. de Does. I feel most grateful to Miss Robin Myers who advised me on for¬
mulating notes and short texts in the last stages of the completion of the work.
It must be stressed that she is not responsible for any linguistic infelicities in the
footnotes to the text. Finally my warmest thanks go to my husband who showed
his interest and disposition to be of assistance throughout, and who compiled
the index.

PREFACE TO THE FIRST EDITION

In 1893, for the celebration of the hundred-and-fiftieth anniversary of the setting
to work of our typefoundry, I wrote an account of its history and added what I
knew about those other foundries whose material we had acquired. Since then
I conceived the idea of describing, so far as possible what remained of the type¬
faces and the inventories that came to us from those old typefoundries. The task
I laid on myself was by no means easy; the collection of documents in our own
archives was of necessity limited, and where the making of printing type is con¬
cerned our public libraries and record offices yield a very meagre harvest.

Never before, so far as I know, has the history of printing type in the Low
Countries been written; therefore this book, whatever may be its defects, has at
least the merit of being original. That the volume should fall far short of perfection
is, of course, inevitable, given my inexperience as a writer of history and the diffi¬
culty of the subject.. Moreover, I must ask a critic to bear in mind that business,
the management of our industrial concern, takes up most of my time, so I have
often and relucbntly had to interrupt the research of which this book is the result.

For all that, and though I have repeatedly proved unequal to the task, I hope
that what I have achieved is of value. I think I have succeeded in giving a clearer
idea of some parts of the subject., in getting rid of obscurities, and finally that I
may claim to have produced serious arguments against certain beliefs that are
widely held. If I have been able to secure a proper recognition for some artists
whose work has hitherto been too little regarded, I shall have the satisfaction of
knowing that my labour has not been wasted and I have made my contribution
to the renown of the typographic art in the Netherlands.