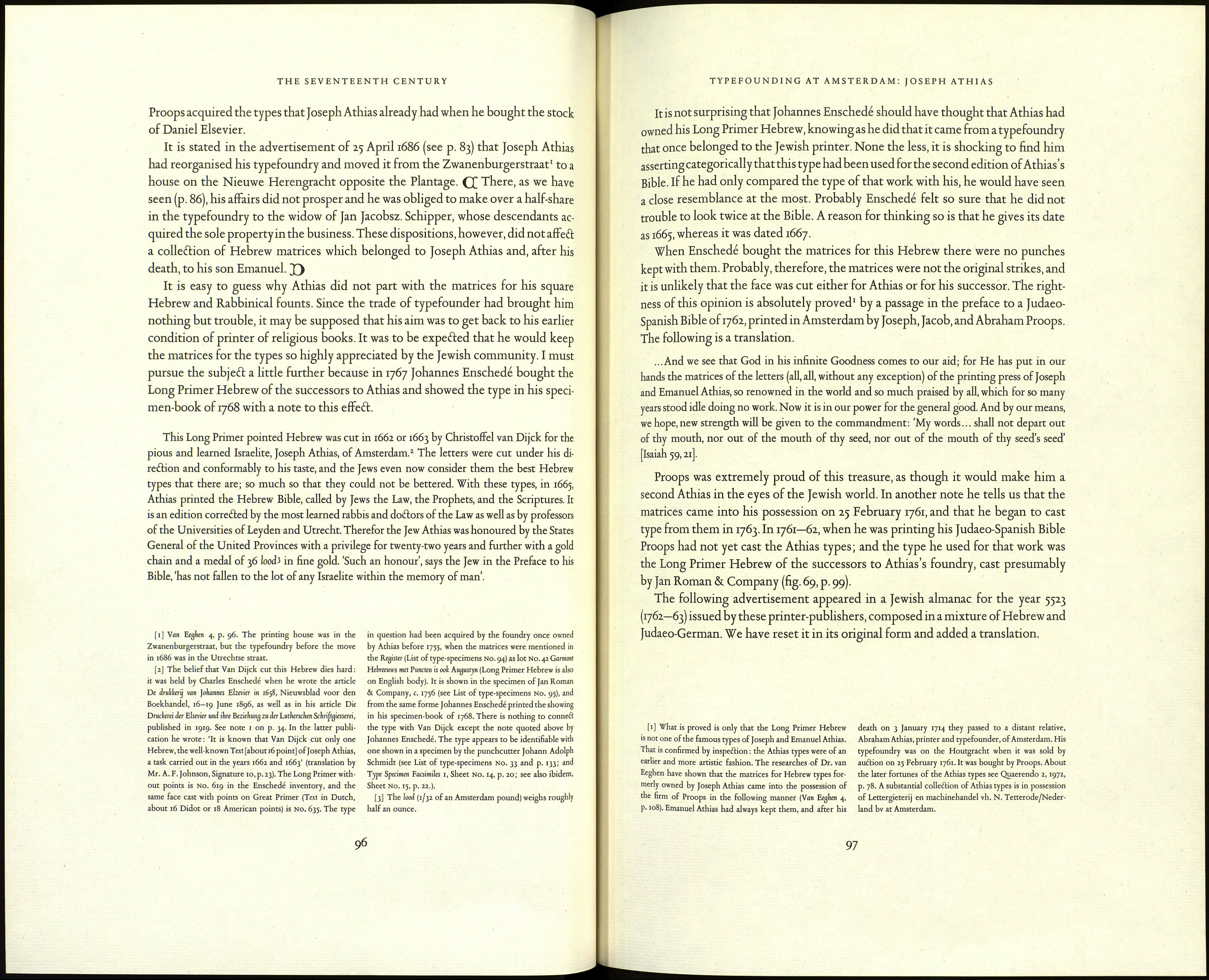 of each of the types in the apportionment of 1767 between Ploos van Amstel and
Enschedé.1

Ç£ It appeared that this table had some inaccuracies which are now set right,
the corrections being explained in the notes added to the table.

The naming, in the third column, of the Luther Foundry as the source of ma¬
trices for which there were no corresponding punches is conjectural. The punches
for some of these faces were owned during the seventeenth and eighteenth cen¬
turies by the foundry of Le Bé in Paris ; strikes made with them could have reached
Amsterdam and Leyden by various channels.2 33

For the sake of completeness I append as Nos. 41—49 a list of the types of
Hillebrand van Wouw,3 which are not shown in the Widow Elsevier's specimen,
and a Brevier Greek derived from the [EgenolfF-Berner later] Luther Foundry.

This table shows that the Widow Elsevier did in faci possess [25] sets of punches
and 49 sets of matrices ; therefore she hardly exaggerated when she told the Widow
Moretus that she could dispose of near fifty sets.

I have already made a passing reference to a type specimen issued by Joseph
Athias. There is a copy of it in the library of Leyden University,4 and it is headed
Yroeven Van Letteren, Die gesneden zijn door Wylen christoffel van Dyd, Welle gegoten werden by fan Bus,
ten huyse van Sr. ]oseph Athias, Woont in de Swanenburg-straet, tot Amsterdam (Specimen of letters
which were cut by the late ChristofFel van Dijck and are cast in the care of Jan Bus
at the house of Sieur Joseph Athias, who dwells in the Zwanenburgerstraat in Am¬
sterdam). The sheet is an impression ofthe forme set up for the Widow Elsevier's
specimen but with the addition of seven founts. The newly-introduced types are:
a Brevier Italic to which the name of Granjon is subscribed, therefore it presumably
came from that French punchcutter; a foly (Emerald) Roman and Italic, probably
cut by Van Dijck, because the sale-catalogue ofthe heirs of Joan Blaeu, printed in
1695,5 attributes them to Van Dijck ; a Peerel (Ruby) Roman [incipit: Alexander autem]

[1] Two other specimens besides that of Athias (see p. 91) prietor ofthe foundry. The date of this broadside is an open

show the material derived from Van Dijck with some additions question ; experts have expressed an opinion that it was printed

(see Copy and Print p. 125). Both of them are undated. Both ap- after the one bearing the name of Jan Roman because the

pear to have been printed from the forme that was used for type is in worse condition ; but against this view the evidence

the specimen of Athias, adjusted so as to include eleven more ofthe heading is admittedly very strong. These two specimens,

typefaces. One of them is headed Letter proef van de gietcryc van identical except for their headings, do not show quite the same

Jan Roman en Comp. l'Amsterdam in de Kalverstraat. See List of type collection as that of Athias. The two-line tidings have gone

specimens No. 95. It must have been issued after 1755, the and in their stead eleven types are introduced that he did not

year in which this firm acquired the foundry. The other dif- show, including the Brevier Greek which Charles Enschedé

fers from it only in the heading, which reads Proeven Van letteren described as coming from the Luther [formerly Egenolff-

Amsterdam. See List of type-specimens No. 106. It is reproduced Nonpareil and, no doubt, useful for Bibles in English, and a

in Type Specimen Facsimiles 1, Sheet no. 13. This heading was ap- Long Primer Hebrew not to be found in the works printed by

while it was owned jointly by Athias and the Widow Schippers [2] See note 1 on p. 64.

mistaken belief that she had succeeded Athias as sole pro- [5] List of type-specimens no. 29.

But Athias certainly had more types in his foundry than were shown in this
sheet. It is known that he had various Hebrew and Rabbinical faces reserved for use
in the books that he printed. Moreover, he put at the foot of his specimen a note
signifying: 'And various other choice letter besides, such as Brevier Greek (figs.
67,68) etc., some cut by C.Van Dijck or assembled by Daniel Elsevier, which cannot
be shown here for lack of room'.

Athias printed and sold many devotional books, the best-known being his He¬
brew Bibles.2 The second edition of this work, finished in 1667, is even now much
used and considered a model. Whilst the first volume of his edition of the Yad of
Maimonides was in the press Joseph Athias died.3 His son Emanuel succeeded him
and completed this great enterprise. At the end of the fourth volume Emanuel
Athias printed words in Dutch to this efFeci:.

Here ends this great and notable work done to the order and at the cost and in the house
of the young man Emanuel, son of the worshipful Joseph Raphael, son of the martyr Abraham
Athias, which last for sake of his belief in the Unity of the Almighty was burnt in the city of
Cordova on 17 Tammaes of the year of the Creation 5427 (1667).

A supplement to the third volume of Maimonides was likewise issued from the
house of Emanuel in 1703; but the supplement to the fourth volume, though set in
the same type and displaying the same engraved ornament, was produced in 1714
from the press of the bookseller Salomon Proops. I shall show later (p. 97) that

eluded in the apportionment to Ploos van Amstel the Groóte 1768 (see List of type-specimen, nos. 132 and 114), printed from

Brevier Roman and Italic, No. 46 and 47 of the catalogue, to- the same formes as those used for the specimen of Jan Roman

gether with the punches for the Italic, complete, but those for & Company (Type Specimen Facsimiles 1, Sheet no. 12). Johannes

the Roman defective, no. 24 and 25 ofthe catalogue ; the Brevier Enschedé put Clir. van Dyk sculpstt under the specimens of all

apportionment of Enschedé the Joly Roman and Italic, no. he named Emjelse Nonparel as in Jan Roman's specimen and

52 and 53 of the catalogue with the punches for the Roman which were not shown by the Widow Elsevier or by Athias.

which were defective; the Nonparel Roman, Perei Roman, Robyn [2] Nicholas Kis wrote in his Mentseß, p. 79, that Athias

with three boxes of punches, being No. 29 (Perei Roman), 31 but that in England a Jew told him that he had found at