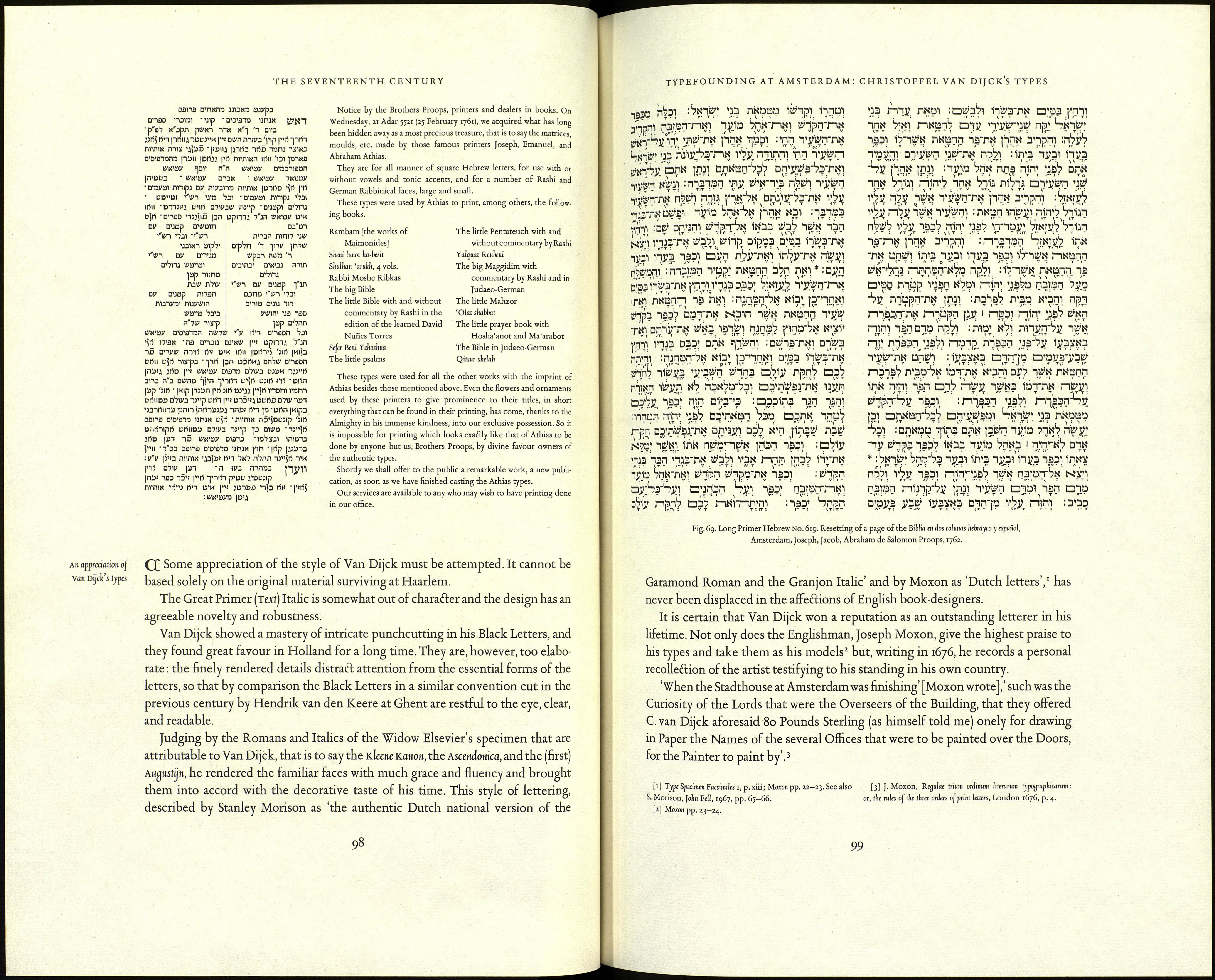 Proops acquired the types that Joseph Athias already had when he bought the stock
of Daniel Elsevier.

It is stated in the advertisement of 25 April 1686 (see p. 83) that Joseph Athias
had reorganised his typefoundry and moved it from the Zwanenburgerstraat1 to a
house on the Nieuwe Herengracht opposite the Plantage. Ç£ There, as we have
seen (p. 86), his affairs did not prosper and he was obliged to make over a half-share
in the typefoundry to the widow of Jan Jacobsz. Schipper, whose descendants ac¬
quired the sole property in the business. These dispositions, however, did not afFect
a collection of Hebrew matrices which belonged to Joseph Athias and, after his
death, to his son Emanuel. ]3

It is easy to guess why Athias did not part with the matrices for his square
Hebrew and Rabbinical founts. Since the trade of typefounder had brought him
nothing but trouble, it may be supposed that his aim was to get back to his earlier
condition of printer of religious books. It was to be expected that he would keep
the matrices for the types so highly appreciated by the Jewish community. I must
pursue the subject, a little further because in 1767 Johannes Enschedé bought the
Long Primer Hebrew of the successors to Athias and showed the type in his speci¬
men-book of 1768 with a note to this effecT:.

This Long Primer pointed Hebrew was cut in 1662 or 1663 by Christoffel van Dijck for the
pious and learned Israelite, Joseph Athias, of Amsterdam.2 The letters were cut under his di¬
rection and conformably to his taste, and the Jews even now consider them the best Hebrew
types that there are; so much so that they could not be bettered. With these types, in 1665,
Athias printed the Hebrew Bible, called by Jews the Law, the Prophets, and the Scriptures. It
is an edition correcLed by the most learned rabbis and doftors of the Law as well as by professors
of the Universities of Leyden and Utrecht. Therefor the Jew Athias was honoured by the States
General of the United Provinces with a privilege for twenty-two years and further with a gold
chain and a medal of 36 loocfa in fine gold. 'Such an honour', says the Jew in the Preface to his
Bible, 'has not fallen to the lot of any Israelite within the memory of man'.

[1] Van Eeghen 4, p. 96. The printing house was in the
Zwanenburgerstraat, but the typefoundry before the move
in 1686 was in the Utrechtse straat.

[2] The belief that Van Dijck cut this Hebrew dies hard:
it was held by Charles Enschedé when he wrote the article
De aVnkkerij van Johannes Elzevier in 1658, Nieuwsblad voor den
Boekhandel, 16—19 June 1896, as well as in his article Die
Druckerei der Elsevier und ihre Beziehung zu der Lntherschen Sehr i ft^ lesserei,
published in 1919. See note 1 on p. 34. In the latter publi¬
cation he wrote: 'It is known that Van Dijck cut only one
Hebrew, the well-known Text [about 16 point] of Joseph Athias,
a task carried out in the years 1662 and 1663' (translation by
Mr. A. F. Johnson, Signature 10, p. 23). The Long Primer with¬
out points is No. 619 in the Enschedé inventory, and the
same face cast with points on Great Primer (Text in Dutch,
about i6 Didot or 18 American points) is no. 635. The type

in question had been acquired by the foundry once owned
by Athias before 1755, when the matrices were mentioned in
the Remisier (List of type-specimens no. 94) as lot No. 42 Garnioni
Hebreemvs met Pinicten is 00k Atiaustyn (Long Primer Hebrew is also
on English body). It is shown in the specimen of Jan Roman
& Company, с 1756 (see List of type-specimens No. 95), and
from the same forme Johannes Enschedé printed the showing
in his specimen-book of 1768. There is nothing to connect
the type with Van Dijck except the note quoted above by
Johannes Enschedé. The type appears to be identifiable with
one shown in a specimen by the punchcutter Johann Adolph
Schmidt (see List of type-specimens no. 33 and p. 133; and
Type Specimen Facsimiles 1, Sheet no. 14, p. 20; see also ibidem,
Sheet No. 15, p. 22.).

It is not surprising that Johannes Enschedé should have thought that Athias had
owned his Long Primer Hebrew, knowing as he did that it came from a typefoundry
that once belonged to the Jewish printer. None the less, it is shocking to find him
asserting categorically that this type had been used for the second edition of Athias 's
Bible, if he had only compared the type of that work with his, he would have seen
a close resemblance at the most. Probably Enschedé felt so sure that he did not
trouble to look twice at the Bible. A reason for thinking so is that he gives its date
as 1665, whereas it was dated 1667.

When Enschedé bought the matrices for this Hebrew there were no punches
kept with them. Probably, therefore, the matrices were not the original strikes, and
it is unlikely that the face was cut either for Athias or for his successor. The Tight¬
ness of this opinion is absolutely proved1 by a passage in the preface to a Judaeo-
Spanish Bible of 1762, printed in Amsterdam by Joseph, Jacob, and Abraham Proops.
The following is a translation.

...And we see that God in his infinite Goodness comes to our aid; for He has put in our
hands the matrices of the letters (all, all, without any exception) of the printing press of Joseph
and Emanuel Athias, so renowned in the world and so much praised by all, which for so many
years stood idle doing no work. Now it is in our power for the general good. And by our means,
we hope, new strength will be given to the commandment: 'My words... shall not depart out
of thy mouth, nor out of the mouth of thy seed, nor out of the mouth of thy seed's seed'
[Isaiah 59,21].

Proops was extremely proud of this treasure, as though it would make him a
second Athias in the eyes of the Jewish world. In another note he tells us that the
matrices came into his possession on 25 February 1761, and that he began to cast
type from them in 1763. In 1761—62, when he was printing his Judaeo-Spanish Bible
Proops had not yet cast the Athias types ; and the type he used for that work was
the Long Primer Hebrew of the successors to Athias's foundry, cast presumably
by Jan Roman & Company (fig. 69, p. 99).

The following advertisement appeared in a Jewish almanac for the year 5523
(1762—63) issued by these printer-publishers, composed in a mixture of Hebrew and
Judaeo-German. We have reset it in its original form and added a translation.

[1] V/hat is proved is only that the Long Primer Hebrew death on 3 January 1714 they passed to a distant relative,

is not one ofthe famous types of Joseph and Emanuel Athias. Abraham Athias, printer and typefounder, of Amsterdam. His

That is confirmed by inspection : the Athias types were of an typefoundry was on the Houtgracht when it was sold by

earlier and more artistic fashion. The researches of Dr. van auction on 25 February 1761. It was bought by Proops. About

Eeghen have shown that the matrices for Hebrew types for- the later fortunes of the Athias types see Quaerendo 2,1972,

merly owned by Joseph Athias came into the possession of p. 78. A substantial collection of Athias types is in possession

p. 108). Emanuel Athias had always kept them, and after his land bv at Amsterdam.