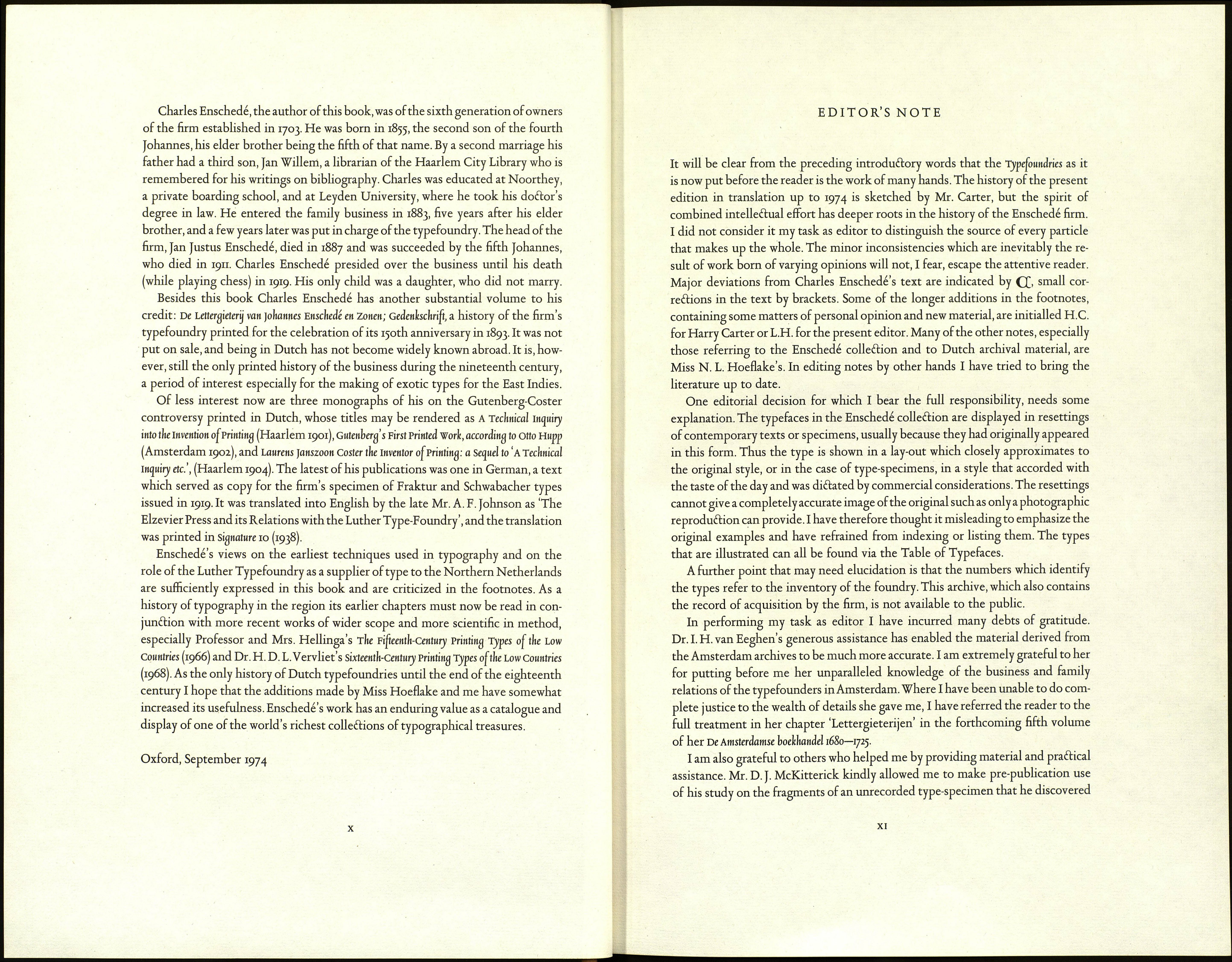 In the last paragraph of his introduction Charles Enschedé regretted the lack of
an essentially Dutch book-type. Today he would certainly have had no cause for
regret. S. H. de Roos, J. van Krimpen, S. L. Hartz and D. Dooijes have all, with their
types cast in lead,contributed to the flourishing growth in Dutch typography which
Charles Enschedé had so ardently desired. Just as Charles honoured Fleischman
by using his typeface for the original edition, so we pay tribute to Van Krimpen
by our use of his Romanee.

After his death in 1919 Charles Enschedé was succeeded by his nephew Frans
Enschedé, and it was he who initiated the work for this English edition. Active in
the company until 1972, he died early this year and we greatly regret that he did
not live to see the completion of the work which he himself once started.

Many people have contributed to this project, but one stands out as having
been irreplaceable: Harry Carter, who shouldered the task thirty years ago, a task
which turned out to be more extensive than was originally expefted because of
the amount of typographical research which has been carried out in the inter¬
vening years. We owe him a great debt of gratitude. He is a friend of more than
one generation in the house of Enschedé. And like a good friend he has pointed
out to us our shortcomings and he has been patient with us over the years : and
much patience was needed! We particularly remember Netty Hoeflake who, as
curator of our Museum, assisted Harry Carter with resource and accuracy. With
unremitting dedication she fulfilled her task up to the time of her illness and death
in 1973. We a^so express our special thanks to Dr.Lotte Hellinga for her willingness
not only in continuing Netty Hoeflake's work but also in taking upon herself the
burdensome task of preparing the entire volume for press. We are furthermore
grateful to Dr. Isabella van Eeghen for her ready co-operation and to Jonkheer
G. Ploos van Amstel for the useful information he kindly provided. Finally a word
of thanks to Gonne Flipse, curator of the Enschedé Museum, who assisted all those
concerned and co-ordinated the work, and to Bram de Does who took care of the
layout and design.

We share the pride and satisfaction of the compositors and printers who were
ultimately responsible for producing the 1978 edition.

PREFACE TO THE SECOND EDITION

This work was written originally in Dutch and printed in 1908 in a French trans¬
lation with which the author was helped by a Belgian friend, Prof. E. Verschaffelt.
For many years past the heads of the firm have wanted an edition in English, and
it was in 1948 that the present version was commissioned. It began as nothing
more than a translation, but as it went on it became obvious that it called for
many more footnotes than the author had supplied. The manuscript rough notes
made by Enschedé and his informants which would have identified many of the
sources of his information were no longer available. In order to document the
text as modern historiography requires it was necessary to search for the sources.
Working, as I was, in England, my search had to be confined in the main to printed
matter; but fortunately the publication since Enschedé wrote of a great deal that
is relevant in the archives of the City of Amsterdam by Messrs. M. M. Kleerkoper
and W. P. van Stockum Jr. in De boekhandel te Amsterdam ѵоотатеЦѴ in de xvile eeuw and
by Dr. I. H. van Eeghen in De Amsterdamse hoelhandel 1680—1725 furnished many of the
references on which Enschedé must have relied in the form of extraits copied
for him by his friend Dr. N. De Roever, who was then Archivist of the City. The
translator turned annotator had the advantage of access to the records and mat¬
erial in the Museum Plantin-Moretus and the University Press at Oxford, as well
as manuscripts in English libraries.

The hunt for sources and the literature published since this book was first
printed in 1908 brought to light some serious defecb in Enschedé's text, too
serious to be passed over without comment. The need to edit became irresistible.
It has been done, so far as was possible, by means of footnotes, but a few passages
enclosed in brackets have been added to or, in some places, substituted for parts
of the original. For these changes I must take the responsibility.

As amended the work remains essentially that of Charles Enschedé. He is ac¬
countable for features of it that are evidently open to criticism by present-day
scientific standards but could, if judged unacceptable, be eliminated only by such
a thorough recasting of the book that it would become something other than he
intended. As he wrote it it is one of the classics of typographical literature and
has served two generations of readers as an indispensable work of reference.

When I had done such annotation as I could the material was passed to the
late Miss Netty Hoeflake, Curator of the Museum Enschedé in the firm's offices
at Haarlem. Miss Hoeflake was able to make large additions to the notes relying
on documents in the Museum and in several Dutch archives and libraries. She
did a great deal of detailed and accurate work in getting the copy ready for the
printers. Her lamented death came before she had finished her revision of the
chapter on the eighteenth century. The lasting value of this edition will depend
very much on her contribution to it.