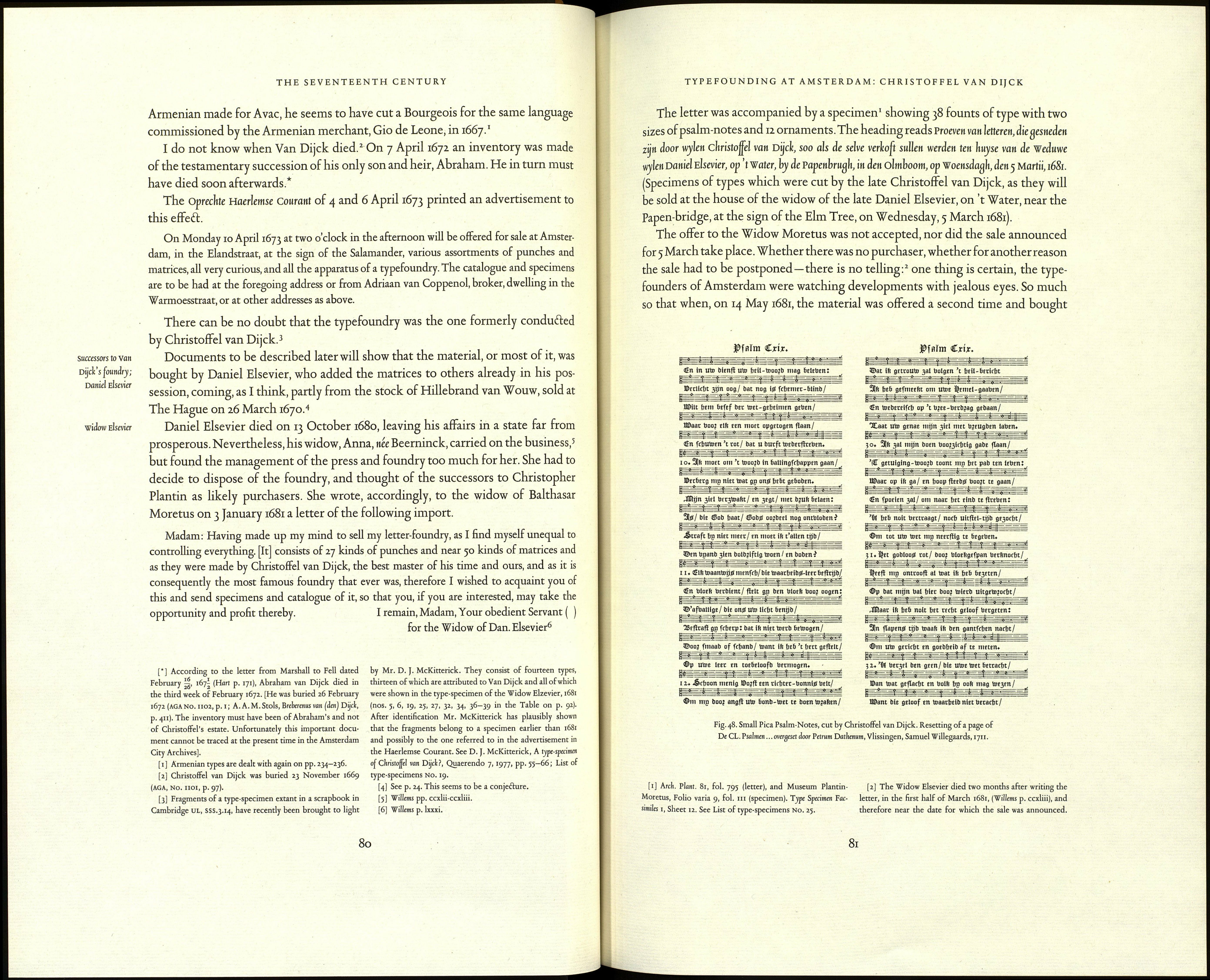 on the Bloemgracht, and to add letter-founding to his trade of goldsmith. It was as
letter-founder that he was described in 1648 when his three workmen, Hendrik
Claesz. Willem Hendriksz, and Jan Jansz, deposed that the house where he lived
let in the rain.

But the outlay on the foundry seems to have been beyond his means. In 1649 he
was still embarrassed, and Reinier Hendriksz, of 's-Hertogenbosch, sought to dis¬
train on his goods. Van Dijck was obliged to resign his property to his creditors;
but when an inventory was made on 5 February 1649 n^e was to De found in his
dwelling. The explanation was given in a statement made by one of his former
workmen, Willem Hendriksz probably, on 24 July from which it appears that the
furniture, porcelain, pictures, copper utensils, bedding, clothes, an oak cupboard
with the tools of his trade inside, five boxes of matrices, and a set of punches had

been removed during the previous February and deposited with various people,
Mrs. Blaeu, who lived near by on the Bloemgracht, Claes Cladt, a hatter, and his
son Hendrik Claesz, foreman to Van Dijck, and others.

What was the outcome of this sad affair I cannot tell ; but evidently things righted
themselves, for on 28 May 1650 a contrat was made between Christoffel van Dijck
and a printer, Engel Jacobsz, of Amsterdam, for the supply of 148 matrices for an
Emerald Roman on condition that the punchcutter might not make another set
like it. In 1651 Van Dijck with a bookseller, Hendrik Stam, were witnesses in a suit
brought by Cornelis de Leeuw against Gillis Joosten about the sale of a psalm-book
with the music, in which the plaintifFclaimed exclusive rights.

In 1652 Van Dijck's circumstances became easier. The survivor of his parents
had died, and he gave a power of attorney to his wife enabling her to enter into
possession of the goods, houses and vineyards left to him by his father, Gilbertus
Brebenus, and his mother, Catherina, at Dexheim and Selzen in the Electorate
Palatine and make division among co-heirs. At much the same time our type¬
founder's business improved. Several contracts for delivery of his types to printers
have survived, and they show that by 1658 Van Dijck had moved to a more con¬
venient house on the north side of the Bloemgracht. One of the agreements is
particularly interesting: it was made on 27 November 1658 with an Armenian,
Mathev Avac, another Armenian, the merchant Jan Haser, who spoke the 'German
tongue ', acting as interpreter. The contract, bound Van Di j ck to supply the material
for casting two sizes of Armenian type, one a Great Primer and the other smaller,
each set made up of 170 punches and 240 matrices, destined for printing a Bible.
Van Dijck stipulated for 34 stivers a piece, and Avac promised when delivery was
complete a present often golden Carolus guilders for the punchcutter's wife.1

About this time an enlargement of Van Dijck's workshop seems to have been
found necessary. In 1663 he was established in the Elandstraat,2 where on 5 Sep¬
tember he wrote a will in favour of his only son, Abraham. By 1665 he had at least
five men working for him: Jan Bongaert, Hendrik Claesz, foreman, Jan Evertsz,
Jan Barendsz, and Herman Hermansz. These names occur in the record of a con¬
tract concluded with a printer, Jan Bruinings, for 100 lb. of Long Primer psalm-notes
at 30 stivers a lb.

The remaining years of Van Dijck's life have left no trace of special interest.
Business may be assumed to have gone on satisfactorily.3 Besides the two sizes of

[1] Kleerkooper-Van Stockt» p. 24. death of Christoffel's only son and heir Abraham in February

money, and did so again on 4 November 1666. In 1669, how- is most grateful for the foregoing information, given here in

ever, he must have bought a garden with a summer house abbreviated form, to Dr. I. H. van Eeghen, Amsterdam. See

and two cottages in the Heiligeweg at Amsterdam. Upon the for a fuller account Van Eeghai 5, Lettergieterijen.