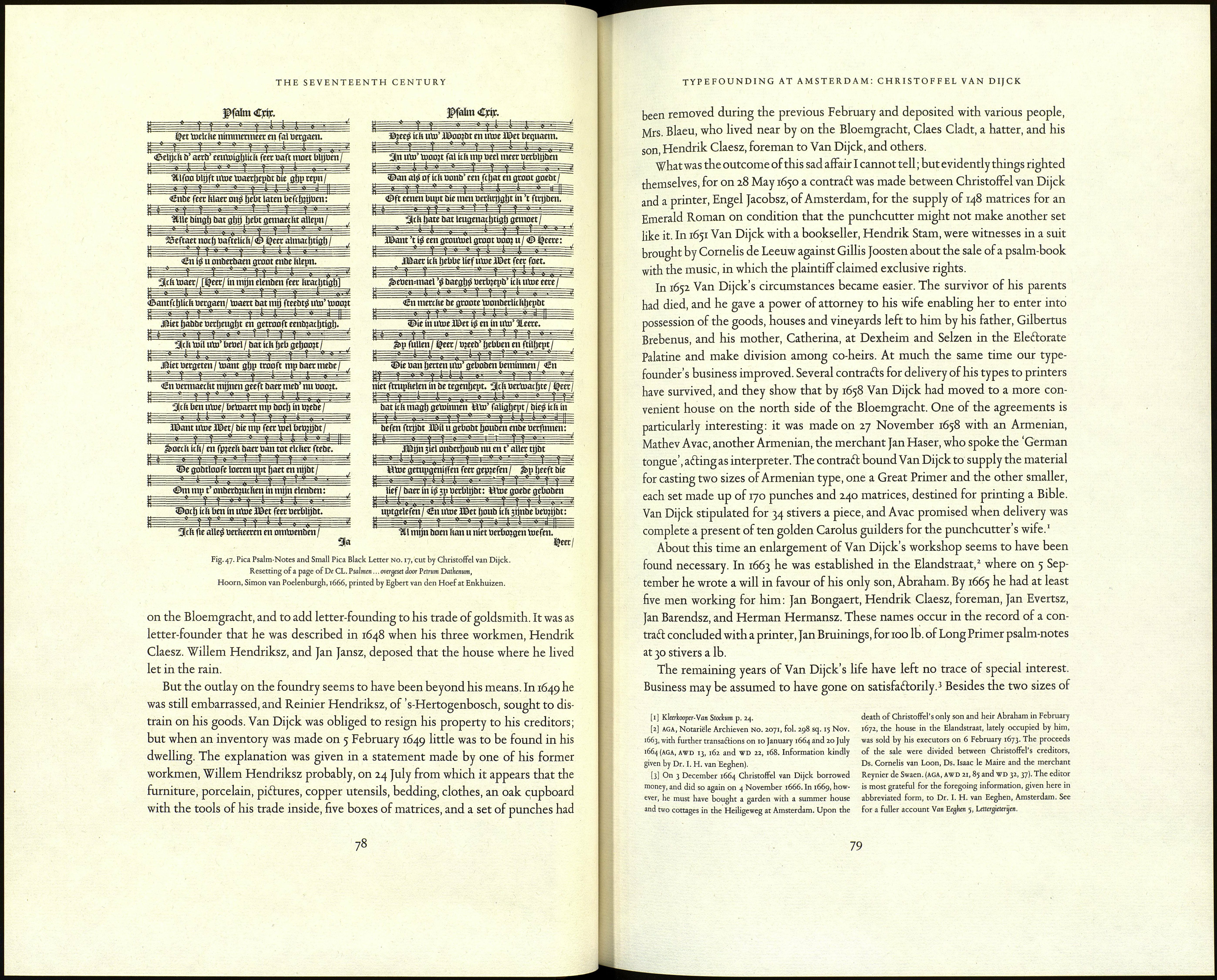 import of types The Elseviers, of Leyden, had four Greek types, each identical with one shown in

the specimens of the Luther Foundry at Frankfurt. I am convinced that our famous
printers got their types from Luther. As I shall show later, the Frankfurt house
did a large business with Holland and sold the printers of this country not only
founts of type but strikes from its stocks of punches.* For instance, Blaeu's foundry
had four Greek types from Luther, and Daniel Elsevier, of Amsterdam, had a Long

[*] See the letter from Marshall to Fell dated January i?, 167Ï van Dijke, &c. have no regard to cutting & justifying, unies

(Hart p. 166), where he writes: 1 se, in this Printing-designe, perhaps to supply a Defeft, or two. So that some famous

we English must learn to use or own hands at last to cut Cutters, they say, are gone, to other Countries for want of

Letters as well as print wth them. For ye Founders here being imployment. And now not one here to be found.'
reasonably furnished wth Matrices from Frankfurt, ye old

Primer and a Brevier from the same source. These last two were bought by Johannes
Enschedé in 1767 and are still in our possession. I will return to them when I come
to describe the stock of Daniel Elsevier; but I will deal first with ChristofFel van
Dijck, to whose business Elsevier succeeded.

Very little is known about this typefounder and that little has only lately come to cJtmtofelwn Dijà
lieht. Hitherto he has been remembered only as one who had a typefoundry in Amsterdam during the seventeenth century; his life and work were quite obscure.
However, in 1878 Alphonse Willems found out that Daniel Elsevier, of Amsterdam,
had dealings with Van Dijck's establishment, and consequently he persuaded him¬
self, though on slight grounds, that the types of the more famous Leyden printers,
Bonaventure and Abraham Elsevier, were made from punches cut by Van Dijck.*
This attribution made it all the more desirable to learn the fafts about a type¬
founder evidently of such great merits. A few documents bearing on the subject.
in the archives of our firm were enough to lead me to a conclusion opposed to that
of Willems so far as the dealings of Van Dijck with the Leyden Elseviers were
concerned, but our records threw no light on Van Dijck himself.

Thanks to some researches undertaken by Dr. N. de Roever, Archivist to the
City of Amsterdam, who kindly put his notes at my disposal, I can give some infor¬
mation about this typefounder, serving at least to illustrate his importance as an
artist and his hard struggle for existence.1

It seems that Van Dijck was born in Germany, near Dexheim and Selzen in the
Palatinate, between 7 September and 23 November 1601.2 He is first traceable in
Amsterdam in 1640,3 when, as a journeyman goldsmith, he witnessed the will of a
workmate. Three years later he set up as master goldsmith, but in poor circum¬
stances. So much can be gathered from the depositions made by his neighbours
in 1646, showing that in May 1645 he moved to a house in the Tichelstraat where his
landlord refused to do necessary repairs : his attic had not even a dormer window.

However, the following year, 1647,4 brought better days. Van Dijck married
Swaentje, widow of Johannes de Praet, a minister of religion deceased in the East
Indies. She it was, presumably, who brought him the means to rent a better lodging,

[*] Willems p.lxxxii)says (in French): 'there may be the ob- possibly to be ascribed to Van Dijck was given by Miss N.

jeftion that the letter (see p. 80) only concerns the Elsevier Hoeflake in S. Morison, A tallv of types, ed. В. Crutchley, 1973.

press at Amsterdam and not that at Leyden. But the answer See further Wan Eeghen 5, Lettergieterijen, for a fully documented

is easy : the Elsevier types, whether of Amsterdam or Leyden, account.

evidently come from the same source'. But the right answer [2] According to an application for publication of the

may not be so easy, as I shall show. banns of his marriage, made on и October 1642, Van Dijck

are so abundant that it would exceed the scope of this trans- p. 182). From the sound of it Dexheim may very well be spelled

lation to try to locate the original documents to which Charles like Dixsen in Dutch.