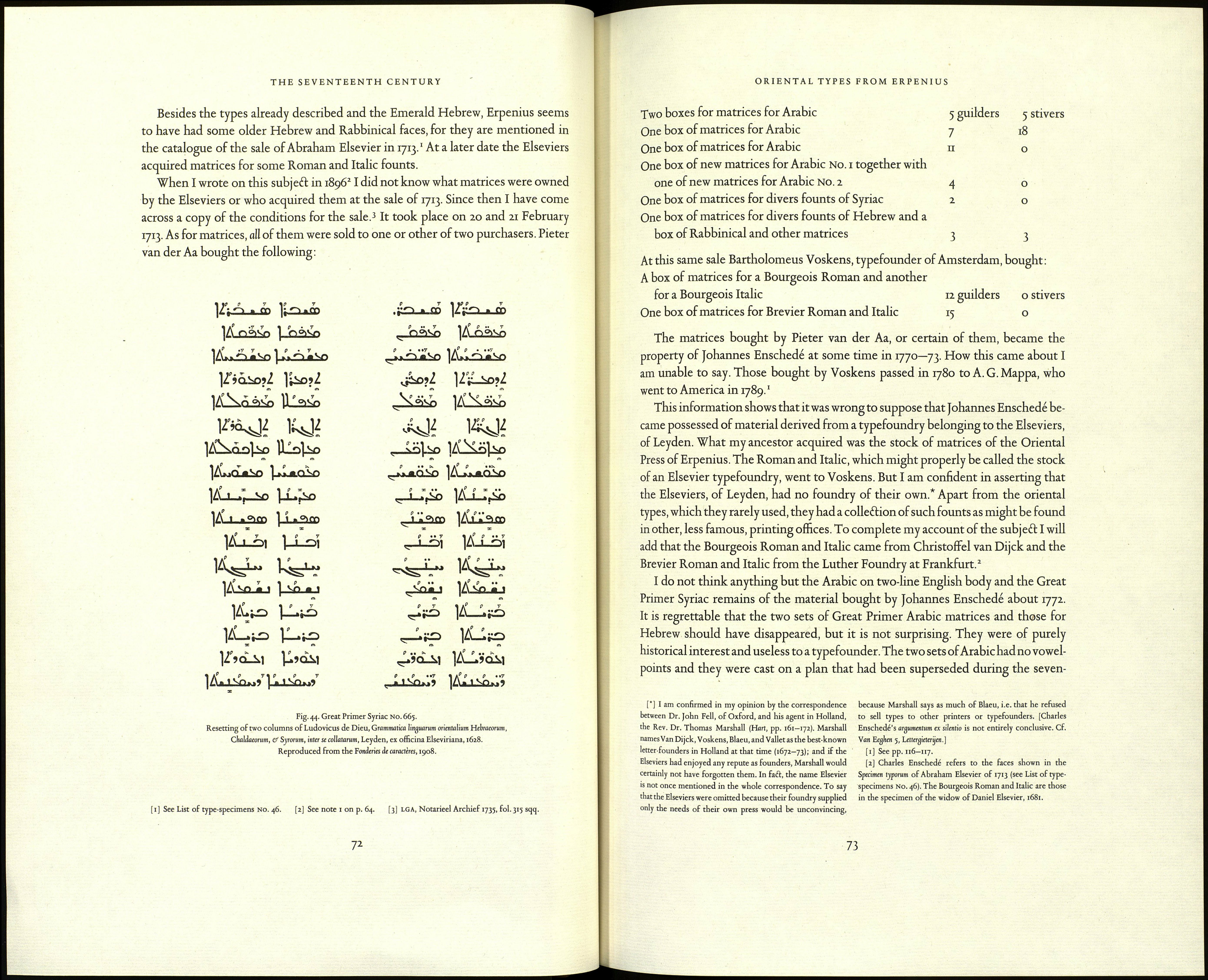 Erpenius enlarged his range of Arabic types by adding a light-faced Great Primer,
used for his Ventateucnus Mosis Arabice, 1622, and a bold face on the same body, to be
seen in his edition in folio of the Historia Saracenica, 1625. '

Frans van Raphelingen the younger closed his workshop in 1619. Wishing to get
rid of his stock, he wrote to his cousin Balthasar Moretus in Antwerp and offered
to sell him any of his types. Moretus, being very jealous where the name of his
business was concerned, let it be known that he would be distressed if any of the
Plantin types were to come into the hands of a rival, who might thereafter claim
the style of 'Plantinian press'. Accordingly he asked of Van Raphelingen in reply
the refusal of all the types. This request came too late : his cousin at Leyden could
only answer to the following effect, on 21 September 1619.

Dear Cousin: We have sorted out all our types and made proofs of them so that everyone
can choose and buy what he pleases. But we did not wish to begin offering them for sale until
we had given you the refusal of them. However, we were forced to do so on the point of his
departure by Thomas Erpenius, whom, as our very good friend, we could ill refuse. So these
are wanting: the Syriac, Ethiopie, Samaritan, and Emerald Hebrew, also the Double Pica Italic.
We were the more easily persuaded to part with these for knowing that you have punches and
matrices, or at least matrices, for all of them. Therefore we believe you will not want them all,
being in a position to have them cast, should you need them.

Your Honour's cousin and friend at command,
Fr. van Ravelingen.*

This letter proves that Erpenius bought the types named in it, but not that he
bought the matrices for them. However, it is certain that he owned both punches
and matrices for his Syriac type, and that it is not the one used in Plantin's Polyglot
Bible of 1569—72.2 The matrices for the Samaritan and Ethiopie were not heard of
again,3 nor were those for Double Pica Italic; but the material from Erpenius's
Oriental Press did not come up for sale until a hundred years later and these
matrices may well have vanished in the mean time. The Syriac was used in 1625 for
an edition of the Psalms (fig. 43),4 probably the last book to be printed at the
press of Erpenius. Soon after his death, which befell on 13 November 1624, his widow
sold his press and its accessories to Isaac Elsevier ;5 and a year later, on 24 December
1625, it was bought from him for 9,000 guilders by Bonaventura and Abraham

[*] This letter was communicated to me by Mr. Max Rooses. Moretus and are in the Museum Plantin-Moretus, ST 58, 59,

It is in the archives ofthe Museum Plantin-Moretus at Antwerp MA 73a, 73b, Early Inventories pp. 108—no. For a copy of the

[3] The punches and matrices for these were bought by

Elsevier, ' who printed in 1628 among other publications a comparative grammar
of four oriental languages (fig. 44, p. ji).2

The Curators of Leyden University were, no doubt, privy to these transactions;
[for they and the burgomasters ofthe city attempted to buy the oriental books and
manuscripts of Erpenius from his widow in 1625 on condition that his printing
equipment would remain in Leyden and be at the service of the University;3] and
on 9 May 1626 they attached the same condition to the provisional appointment
of Bonaventura and Abraham Elsevier as Printers to the University.4