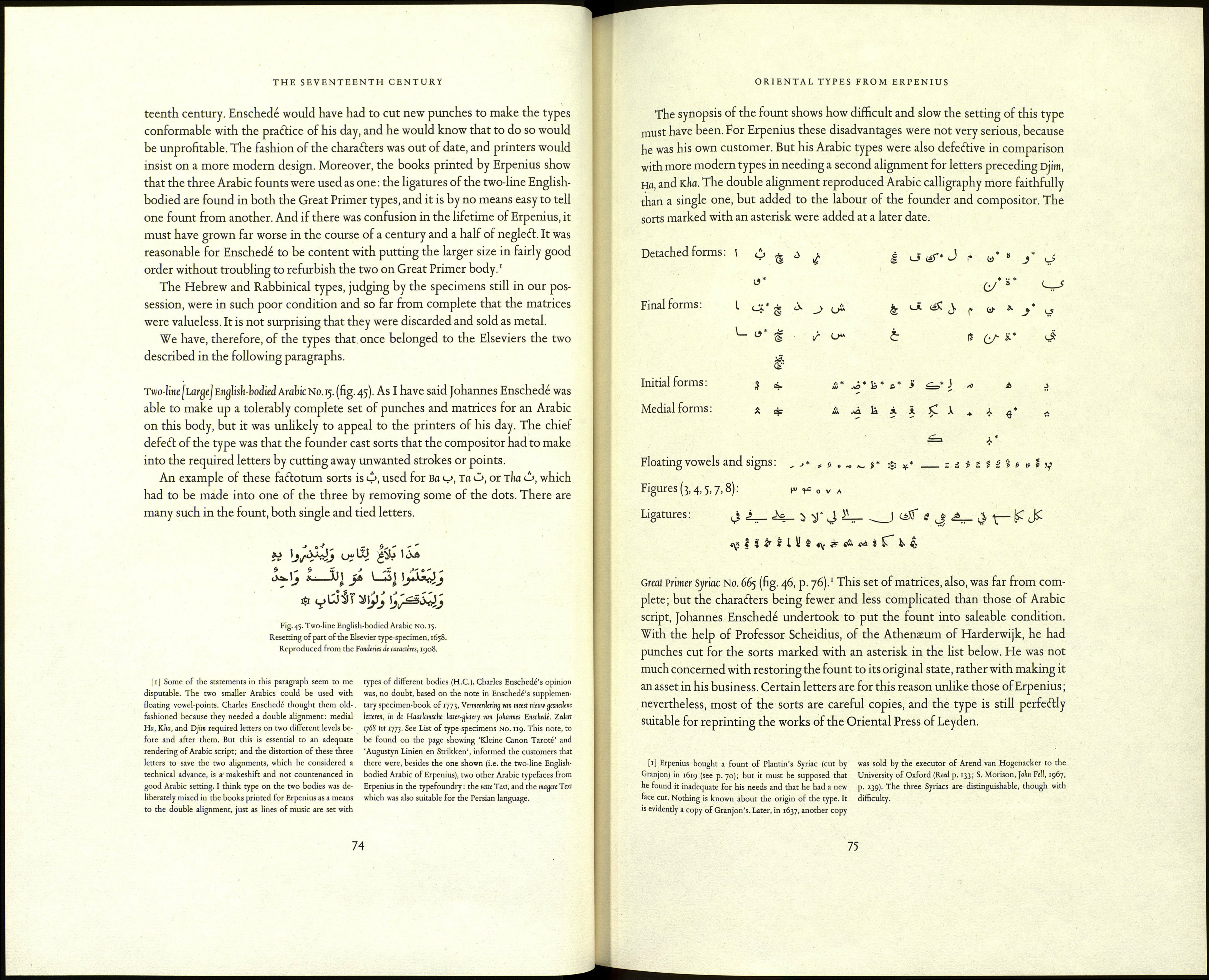 Besides the types already described and the Emerald Hebrew, Erpenius seems
to have had some older Hebrew and Rabbinical faces, for they are mentioned in
the catalogue ofthe sale of Abraham Elsevier in 1713.1 At a later date the Elseviers
acquired matrices for some Roman and Italic founts.

When I wrote on this subject, in 189621 did not know what matrices were owned
by the Elseviers or who acquired them at the sale of 1713. Since then I have come
across a copy of the conditions for the sale.3 It took place on 20 and 21 February
1713. As for matrices, all of them were sold to one or other of two purchasers. Pieter
van der Aa bought the following:

Reproduced from the Fonderies de caractères, 1908.

One box of matrices for Arabic 7 18

one of new matrices for Arabic N0.2 4

One box of matrices for divers founts of Syriac 2 о

One box of matrices for divers founts of Hebrew and a

box of Rabbinical and other matrices 3 3

At this same sale Bartholomeus Voskens, typefounder of Amsterdam, bought:
A box of matrices for a Bourgeois Roman and another

One box of matrices for Brevier Roman and Italic 15 о

The matrices bought by Pieter van der Aa, or certain of them, became the
property of Johannes Enschedé at some time in 1770—73. How this came about I
am unable to say. Those bought by Voskens passed in 1780 to A. G. Mappa, who
went to America in 1789.1

This information shows that it was wrong to suppose that Johannes Enschedé be¬
came possessed of material derived from a typefoundry belonging to the Elseviers,
of Leyden. What my ancestor acquired was the stock of matrices of the Oriental
Press of Erpenius. The Roman and Italic, which might properly be called the stock
of an Elsevier typefoundry, went to Voskens. But I am confident in asserting that
the Elseviers, of Leyden, had no foundry of their own.* Apart from the oriental
types, which they rarely used, they had a collection of such founts as might be found
in other, less famous, printing offices. To complete my account of the subject. I will
add that the Bourgeois Roman and Italic came from Christoffel van Dijck and the
Brevier Roman and Italic from the Luther Foundry at Frankfurt.2

I do not think anything but the Arabic on two-line English body and the Great
Primer Syriac remains of the material bought by Johannes Enschedé about 1772.
It is regrettable that the two sets of Great Primer Arabic matrices and those for
Hebrew should have disappeared, but it is not surprising. They were of purely
historical interest and useless to a typefounder. The two sets of Arabic had no vowel-
points and they were cast on a plan that had been superseded during the seven-

[*] I am confirmed in my opinion by the correspondence because Marshall says as much of Blaeu, i.e. that he refused

between Dr. John Fell, of Oxford, and his agent in Holland, to sell types to other printers or typefounders. [Charles

Elseviers had enjoyed any repute as founders, Marshall would [2] Charles Enschedé refers to the faces shown in the
certainly not have forgotten them. In faft, the name Elsevier Specimen typomm of Abraham Elsevier of 1713 (see List of type-
is not once mentioned in the whole correspondence. To say specimens No. 46). The Bourgeois Roman and Italic are those
that the Elseviers were omitted because their foundry supplied in the specimen of the widow of Daniel Elsevier, 1681.
only the needs of their own press would be unconvincing,