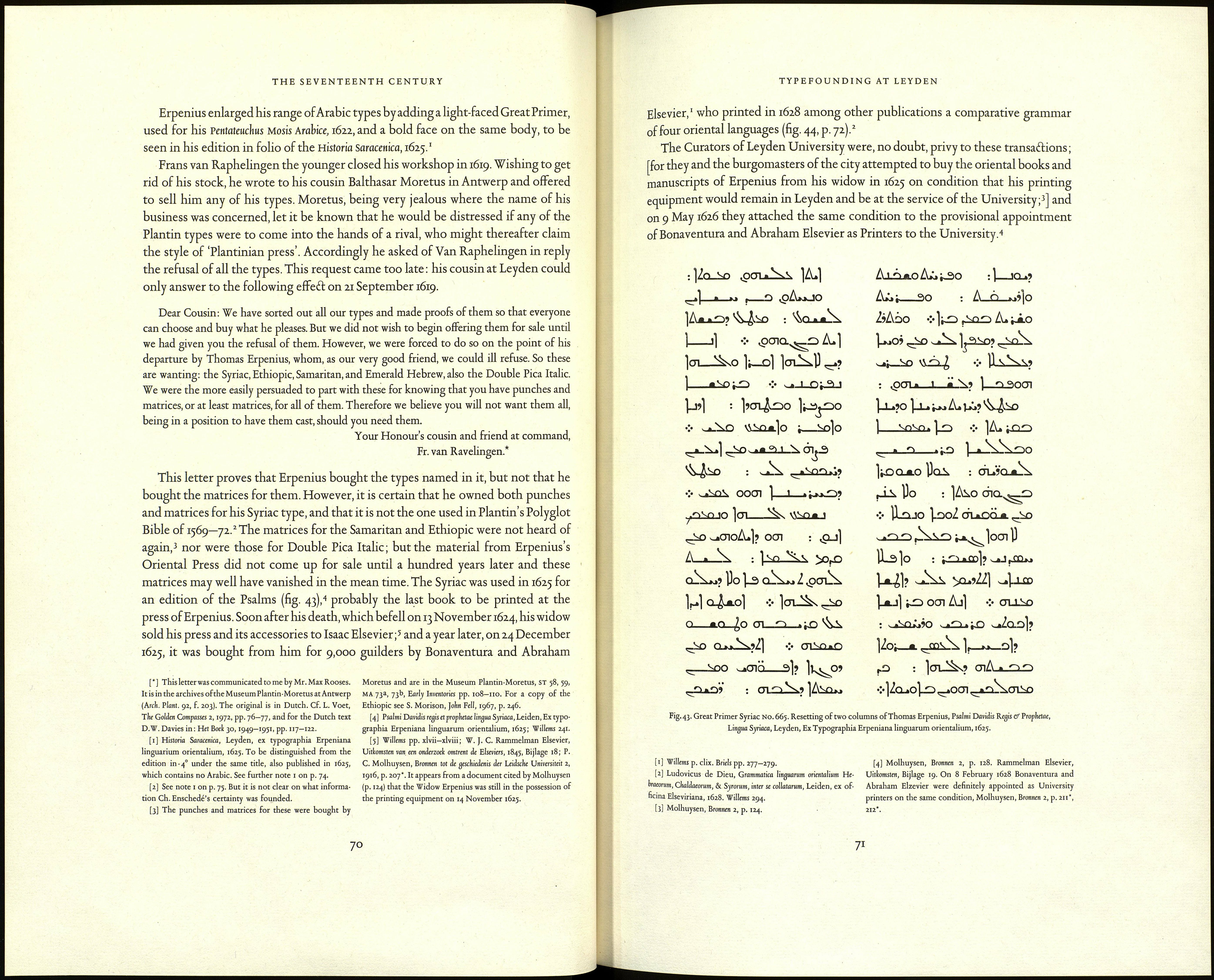 (J¿ Arend van Hogenacker had a younger brother, Hendrik, born in 1614, whose
son, Abraham, also became a typefounder. There is a record that on 8 July 1641
Reinier Hendriksz. Hommerdinck, husband of Arend's sister Haasj e, and Abraham
Hendriksz. van Hogenacker, master typefounders, swore that they had supplied a
printer at The Hague with certain types and mathematical signs.1 ]3

Thomas Erpenius The catalogue of the sale of the types of Abraham Elsevier in 1713 shows that the
matrices owned by the last of the Leyden Elseviers were for Arabic, Syriac, Hebrew,
Roman and Italic.2 Punches existed for all but the two last. The punches certainly
came from Thomas Erpenius, professor at Leyden University, about whom I can
give the following information.3

Thomas van Erp was born at Gorinchem in 1584. His father, Gerard Jan van Erp,
and his mother, Beatrix, née De Bije, both came of patrician families of 's-Hertogen-
bosch. As a youth the future professor showed a great aptitude for languages. He
made a tour of England, France, Germany, and Italy, spending most of his time at
the universities. Coming back to Leyden near the end of 1612, he was appointed
Professor of Oriental Languages with the exception of Hebrew on 10 February 1613.
His lectures had a wide reputation and many famous scholars, among them Sixtinus
Amama, Adolf Vorstius, and Jacobus Golius, owed much to his teaching and guid¬
ance. Besides leciuring Erpenius produced a number of learned works, entrusted
for printing and sale to his friend Frans van Raphelingen the younger,4 grandson
of Plantin, who from about 1588 carried on the printing office and bookshop es¬
tablished by Plantin at Leyden.

But having had his earlier books printed by Frans van Raphelingen the younger,
Erpenius decided to set up a press of his own. He named his private press, [es¬
tablished in 1615],5 'Typographia Erpeniana Linguarum Orientalium'. The Uni¬
versity recognised his outstanding merit by conferring the status of 'ordinarius' on
him in 1618 ; and in 1619 a second chair of Hebrew was specially constituted for him.

on lga, Notarieel Archief. Charles Enschedé also noted Mey had anything to do with this invention. For the possi-

there that another brother of Arend had a daughter who bility of stereotyping at an earlier date see note 4 on p. 85.

der Mey connected with this family of typefounders is in- [3] This information, somewhat abbreviated in the English

teresting. I recall that S. & J. Luchtmans in a letter of 24 June translation, comes from A. J. van der Aa, Biographisch woorden-

1801 addressed to Mr. Renouard ât Paris mention the in- boeh der Nederlanden, and the Biographie universelle, vol. 12. For а

Leyden, and say that the idea of moulding from formes of Biografsch Woordenboct 8, 495-496 (F. S. Knipscheer).

type came to him from a man named Van der Mey. It is very [4] For Frans van Raphelingen the Youger, see L. Voet, The

founding business of his uncles and cousins, and the fans re- a bibliography of his Hebrew books: L. and R. Fuks, The

ported by the Luchtmans seem by so much the more cred- Hebrew production of the Plantin-Raphelengius presses in Leyden, Studia

The first of the types bought by Erpenius for his press was an Arabic. The
punches were cut specially at his expense, but the name of the cutter is not known.
The type, on a two-line English body, was used in 1617 to print an Arabic grammar
(fig. 42).I It was also used in that year for a famous work by Erpenius, Historia ioseplii
patriarcJtae, ex Alcorano, Arabicè.2

Resetting of a page of Thomas Erpenius, Grammatica Arabica,

Reproduced from the Fonderies de caractères, 1908.

[2] The Arabie type of Erpenius is the one now belonging
to Joh. Enschedé en Zonen (Type no. 15), as was stated in the
Enschedé type specimen of 1773. Cast without vowels it fits
on a Great Primer body measuring 16 i American points. In
the preface to his edition of Locmani Fabulae Erpenius says
that owing to the difficulty in getting printed texts in the
oriental languages and for lack of a printer with the neces¬
sary types he had resolved to set up his own press and equip
it with the types needed for his work. The Fabulae, he says,
were issued as a specimen of the Arabic newly cut and cast
at his expense, but not vowelled because the points for vowels
were not yet ready. As Charles Enschedé says (see p. 74), a
good many of the sorts were added in later years. The at¬

tempts of Erpenius to get Arabic type from Guillaume le Bé
the Younger and his disappointment are mentioned in letters
from Erpenius to Isaac Casaubon of 1610 and 1612 (I. Casaubon,
Epistolae, 1709, letters No. 663 and 823, and Biographie Universelle,
12, p. 578 b). Erpenius went to Paris in 1609 and on its com¬
pletion tried to get his Arabic grammar printed by le Bé, but
not having succeeded had it printed after his return to Leyden
in 1612 by Raphelengius (Grammatica Arabica, quincjue libris metho-
dicè explicata, Leiden, 1613). The Raphelengian Arabic, though
much bigger, is similar in design to that of the Locmani Fabulae,
and it is probable that both were cut by the same man. Both
are much less elegant then Le Bé's, and all three are far sur¬
passed by the punches cut for Savary de Breves, not long
before 1615, now kept at the Imprimerie Nationale in Paris.
(H.C.)