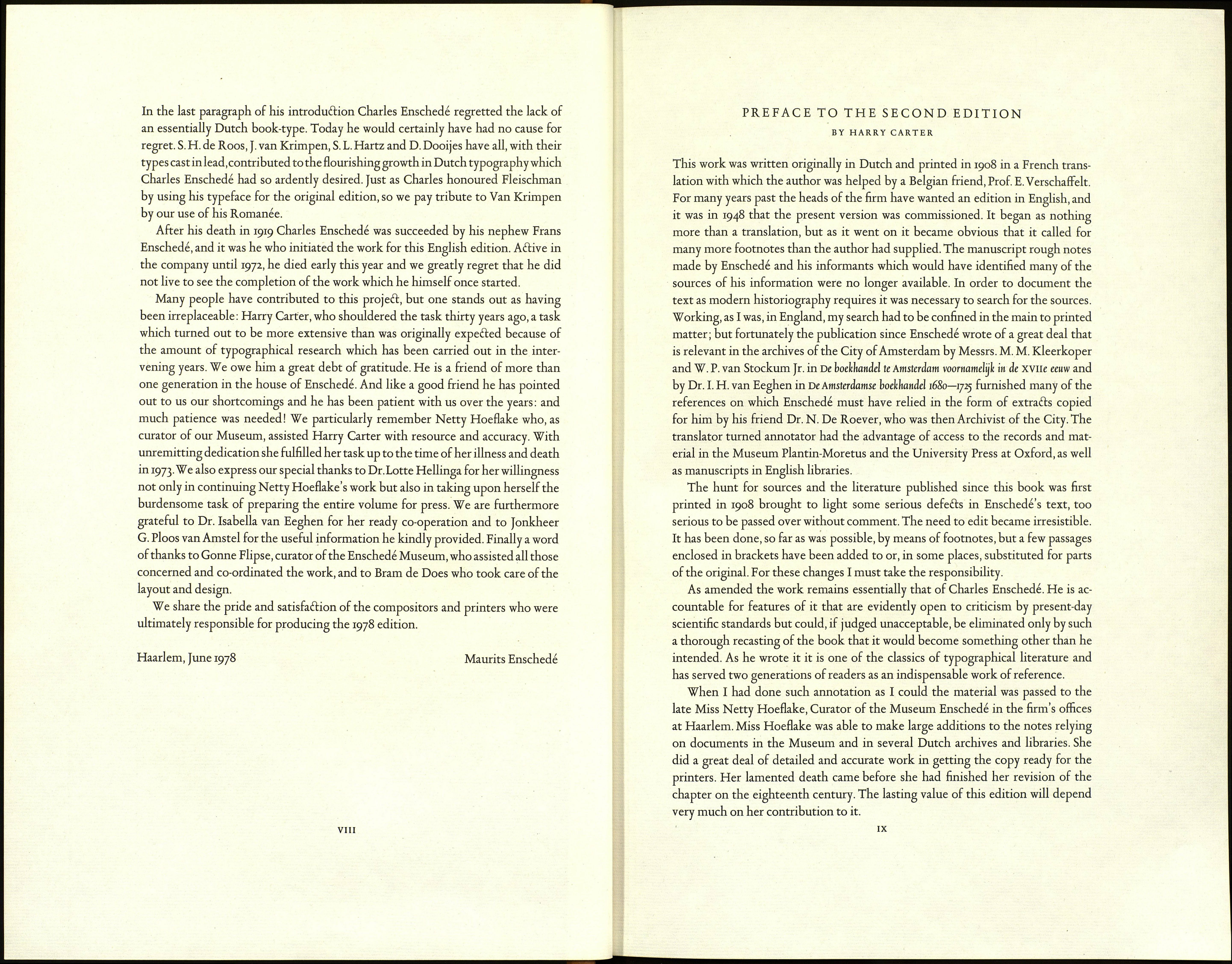 We are pleased that this revised edition—to which we have been looking forward
for a long time — makes its appearance on the occasion of the 275th anniversary
of our Company.

Charles Enschedé's original text was also inspired by a jubilee: the 150th anni¬
versary of the typefoundry of Joh. Enschedé en Zonen in 1893.

While compiling a new type specimen, Charles studied the foundry's stock of
historic material and this led him to produce a detailed 'gedenkschrift', a com¬
memorative history, which formed the basis of his book, which appeared in 1908
under the title Fonderies de caractères et leur matériel dans les Fays-Bas du XVe au XlXe siècle.

Type-historians regarded the book as an indispensable source of information,
even after later research had shed new light on the sub j eft. In view of continuing
demand it was decided to produce a new and revised edition, this time in English
in order to reach a wider public.

Since the first edition there have been considerable changes, at Enschedé's as
elsewhere: especially in the typefoundry which —due to the introduction first of
composing-machines and subsequently of photographic composing techniques —
has almost completely lost its original importance. However our love of type and
the inherent interest in the history of typography have remained unchanged.
Neither have we forgotten that the eighteenth-century music types of Fleischman,
technically a chef-d'œuvre in the history of punch-cutting and type-founding, were
subsequently used for security purposes in the borders of bank-notes. They there¬
by formed the basis for the development of security printing in our works.

We have also endeavoured to express our dedication to the typographic arts by
the form in which this new edition is presented. Convinced of the importance of
providing prints direct, from our collection of historic types, both for study pur¬
poses and for the fullest appreciation of their typographical qualities, we have
tried as far as possible to put the principle into practice. For the 1908 edition many
historic types used in the composition of the illustrations were cast from the origi¬
nal matrices in our collection. The standing type from which these illustrations
were originally printed was preserved and—with a few exceptions—has been used
again for this revised edition. Where an illustration in the original edition has been
reproduced, this is mentioned in the caption. The book also contains illustrations
from still earlier standing type which was used in printing the type specimen
in 1768, its reprint in 1867, the first edition of this book and the present volume.
Illustrations 20 and 21 are cases in point.

Unfortunately it has not been possible to make a complete inventory of all the
punches and matrices in our possession.