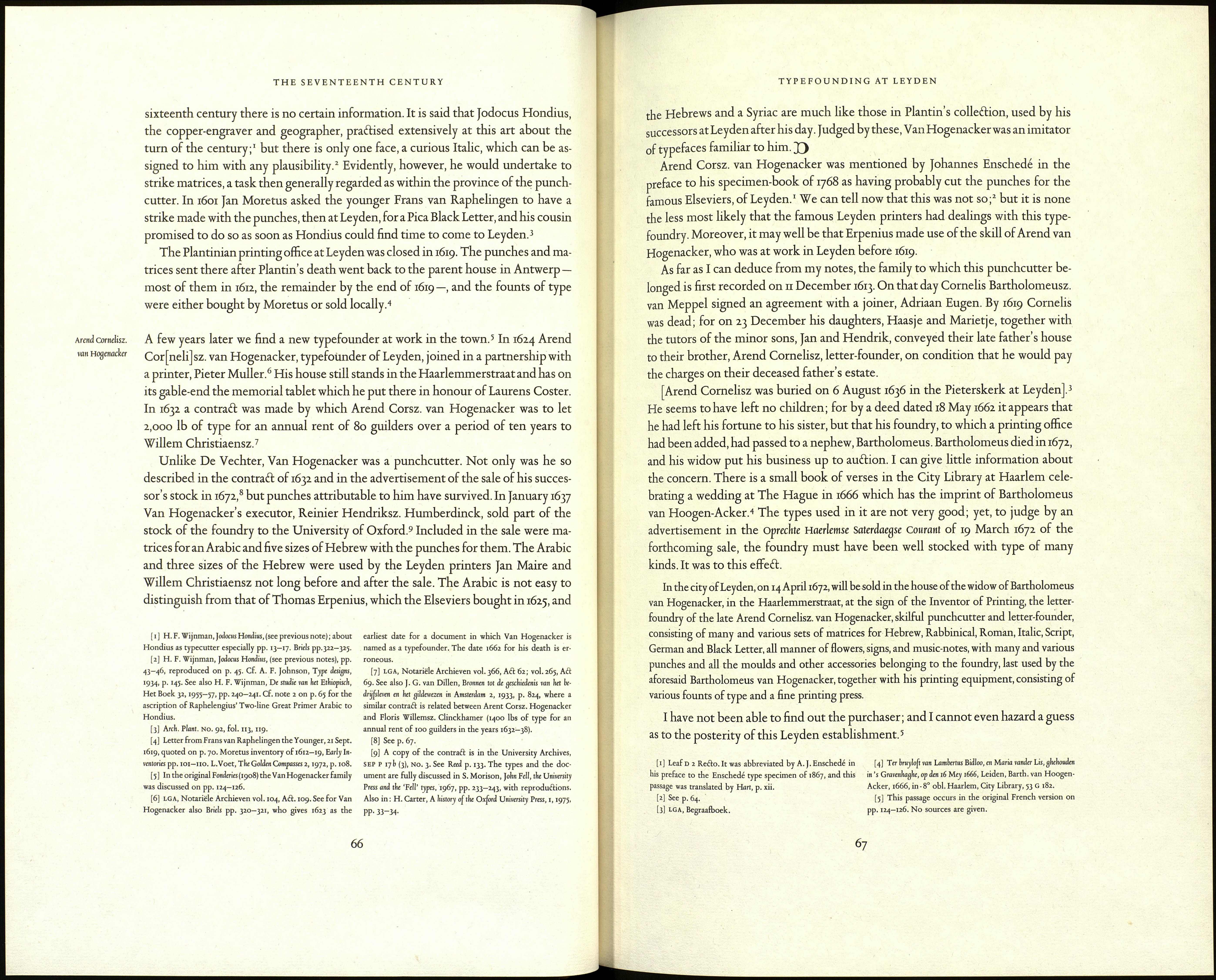 type belonging to Johannes Elsevier in 1658 only two or three were by Van Dijck.1
The oriental types came from the Leyden professor, Erpenius; the Greek and most
of the Roman and Italic had been bought in Frankfurt from the Luther Foundry.
I pointed out that Daniel Elsevier, who left Leyden in 1655 and set up as a printer
in Amsterdam, probably did avail himself of the great talent of Van Dijck, but that
this Elsevier's business had nothing to do with the one owned by his brother
Johannes. The types belonging to Johannes passed to his son Abraham, and on his
death they were sold by auction on 20 February 1713.2

(J¿ In the decade 1570—80 Hendrik van den Keere the Younger, of Ghent, was the
only considerable typefounder in the Netherlands. Plantin, evidently referring to
him, informed a correspondent in Spain that there was only one.3 After the death
of Van den Keere Plantin bought from the widow those matrices that he wanted, and
then the foreman of Van den Keere's foundry, Thomas de Vechter, acquired some
twenty sets of matrices from it, most of them for types cut by his former master
but some by Garamond, Granjon, and Tavernier, with some older stock of little
value.4 Thomas de Vechter moved to Antwerp in 1582 and then to Leyden in 1584.

The cessation of typefounding at Ghent soon after 1580 and the removal of
De Vechter from Antwerp was followed within ten years by a dearth of casters at
Antwerp. In 1592 Jan Moretus was asking his cousin at Leyden whether there was
anyone near there who could cast a fount for him, and he was told that two men
could do it, Thomas (i.e. De Vechter) in Leyden and Gabriel Guyot at Rotterdam,
the latter having no matrices of his own.5 De Vechter accepted the commission.6

Typefounding was carried on at Leyden from the arrival of Thomas de Vechter
in 1584 until 1672, when the material belonging to the foundry of Van Hogenacker
(see p. 66) was sold. Many of the founts used by Dutch printers could have been,
and probably were, supplied from Leyden.

Thomas de Vechter settled in Leyden in December 1584 in the premises in the
Vrouwensteeg,7 belonging to the house at the corner of the Breestraat which Plantin
had bought and on his departure from Leyden left to his son-in-law, the elder

[1] Ch. Enschedé, De drttkkerij van Johannes Elsevier in 1658, they relied, even mainly, on one supplier of matrices or

258; id., Elzevier-Van Dyck, Klaasesz Aankondiger 1900, No. 4, was learnt that the Roman and Italic types stocked by Luther

pp. 1-16. A detailed study of the Elsevier types by Charles in the seventeenth century did not originate with him and

phy and cf. p. 91), and was translated into English by A. F. the previous century.

It cannot be said that either Enschedé or Willems settled [3] Correspondance de Christophe Plantin, p. 149.

viers (of Leyden) owned matrices other than those sold in 487, without commentary.

Frans van Raphelingen (Raphelengius).' De Vechter cast type for his landlord and
looked after the large stock of typefounding material which had passed to the
Leyden house on Plantin's death.2 He cast for other printers as well, and there is
reason to think that he was able to supply them from some of Van Raphelingen's
matrices. By ібоі he was employing three journeymen.3

From a document drawn up after the death of his wife in 1595 it appears that he
had six children, two of whom became typefounders, Thomas then 11 and Abraham
6 years old. He remarried soon afterwards.4

Thomas de Vechter died in his house in the Vrouwensteeg and was buried in
the Pieterskerk at Leyden on 22 March 1602.5 The Christian name was given as Tonis
(short for Anthony), certainly a clerical error. There can be no doubt that the de¬
ceased was our Thomas, for on 21 December 1604 Jan Theunisz, a printer at Amster¬
dam, acknowledges his debt to Jan de Vrijer, living at Leyden and tutor of the
minor children of the typefounder Thomas de Vechter, for matrices bought from
the widow.6

Thomas (Thomaszoon) de Vechter, born at Leyden and typesetter by trade,
asked for the banns to be published for his marriage on 13 December 1604.7 He is,
no doubt, the Thomas de Vechter, typefounder at Leyden, who was engaged in a
lawsuit in 1613. In a document of 1617 his description is also typefounder; he afts
on behalf of his minor brother Jan. On 6 September 1630 the departure of Thomas
de Vechter to Amsterdam is certified by the Dutch Reformed Church at Leyden.

Abraham de Vechter married in 1633. From the banns it appears that he was born
at Leyden, was a typefounder by trade, and was living in the Leeuwendaal.

There was another typefounder, Jan Theunisz, in Leyden at the beginning of the
century. He was previously mentioned as buying matrices from the widow of
Thomas de Vechter in December 1604 (see above). He printed books at Leyden and
later at Amsterdam in which he described himself as 'typefounder'.8 Little is known
about his exercise of the trade, which cannot have been extensive and seems to
have come to an end by 1608.

[2] L. Voet, Het Plantijnse huis te Leiden, Verslag van de Alge-
mene Vergadering verenigd met Bijdragen en Mededelingen
van het Historisch Genootschap 75,1961, pp. 15*—16*, 29 (note
3). Van Raphelingen's Arabic type, shown in Van Raphelingen's
Specimen Charactermn Arabicoram of 1595 (List of type-specimens
No. 6) were not discussed by Charles Enschedé. The speci¬
men was partly reproduced by H. F. Wijnman, The origin of
Arabic typography in Leiden, 1957, and by Vervliet pp. 315-317, as
EXO 1. Wijnman tended to ascribe the type to Hondius, while
Vervliet expressed some reservation about this ascription.
E. Braches (dubiously) distinguished two founts, one of which
he ascribed to Guillaume le Bé in Paris in : Raphelengius' Nasciti
and Maghribi. Some rejections on the origin of Arabic typography in the

[7] The archivalia on which this short account of the sons
of Thomas I de Vechter is based are given by Briels pp. 490—493.