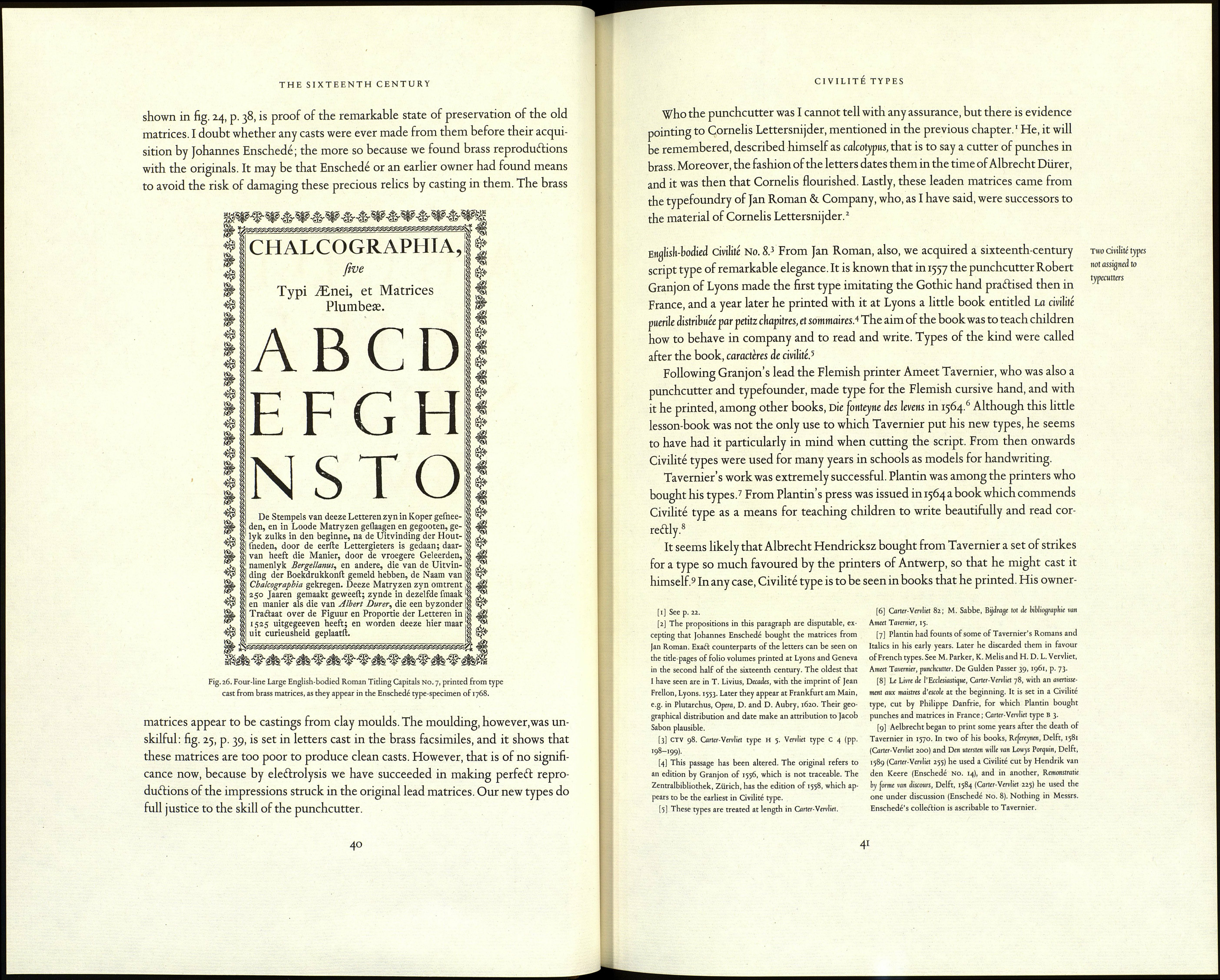 unfinished Historischer Bericht, previously cited.1 Von Klettenberg unwarrantably de¬
scribes the brass Fraktur type as an enlarged version of the letters used by Fust
and SchoefFer and as the work of one of their journeymen who brought the art of
printing to Frankfurt. The book was read by Johannes Enschedé who accepted this
account of the subj eft and valued it as corroborating his conviction that brass
punches were much used by the early printers.X)

Matrices of lead were sometimes used as late as the eighteenth century. There
is an instruftive passage to this effect, in Friedrich Gessner's book on printing and
typefounding, printed at Leipzig in 1740—45.2 He notes against the type specimen
of Bernhard Christoph Breitkopf that the six biggest Fraktur faces were cut by
Johann Peter Artopaeus in brass and the other, smaller ones in steel. The Roman
titling capitals from Canon to Great Primer, eight in all, were also cut by Artopaeus
in brass. Gessner explains that the big faces were cut in brass and not in steel be¬
cause printers use them seldom, and the quantities needed are not too much for
the laborious proceeding of casting in matrices of lead.3 Johannes Enschedé took
careful note of what Gessner wrote : he was concerned to prove that brass punches

for striking leaden matrices were rarely made after 1500. He valued his large capitals
all the more for believing that their leaden matrices might be the only ones of a
later date to have survived. For the Luther Foundry had no matrices struck with
their brass punches.

We still have the Four-line [Large] English-bodied Roman Titling Capitals No. 7
complete as far as the matrices are concerned, but lacking punches for A F G H О Q. '

The matrices are in very good condition, and it is apparent that they have been
little used. Johannes Enschedé did not cast in them: he used the brass matrices,
which I will mention below, and from those he made the fount for his specimen-
book of 1768 (fig. 26, p. 40). He displayed them under the heading chalcographia, sive
Typi Aenei, et Matrices vlumbeae, and beneath them he put a note in Dutch to the fol¬
lowing efFecF:

The punches for these letters are cut in brass and struck and cast in leaden matrices, like
those made at first, after the invention of woodcut printing, by the earliest typefounders. There¬
fore this proceeding was given the name of chalcographia by the old scholars, Bergellanus and
others, who wrote of the invention of printing. These matrices were made some 250 years ago,
being of the same taste and fashion as those of Albrecht Dürer, who produced a Treatise on the
Form and Proportion of Letters in 1525. They are shown here only as a curiosity.

We have always shrunk from using the matrices. We have, however, made elecFro-
typed duplicates of them without their sufFering any harm. The complete alphabet