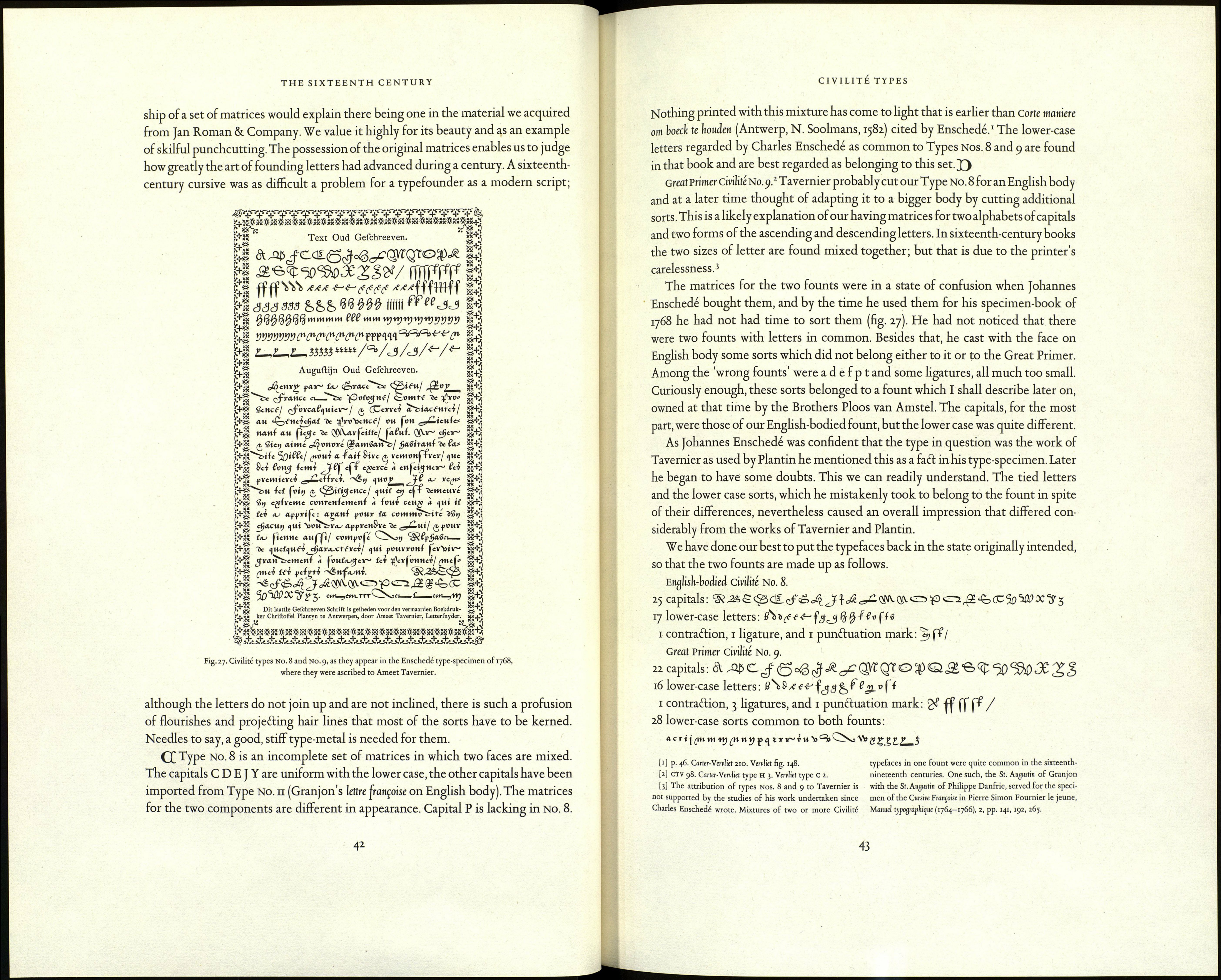 shown in fig. 24, p. 38, is proof of the remarkable state of preservation of the old
matrices. I doubt whether any casts were ever made from them before their acqui¬
sition by Johannes Enschedé; the more so because we found brass reproductions
with the originals. It may be that Enschedé or an earlier owner had found means
to avoid the risk of damaging these precious relics by casting in them. The brass

Fig. 26. Four-line Large English-bodied Roman Titling Capitals No. 7, printed from type
cast from brass matrices, as they appear in the Enschedé type-specimen of 1768.

matrices appear to be castings from clay moulds. The moulding, however,was un¬
skilful: fig. 25, p. 39, is set in letters cast in the brass facsimiles, and it shows that
these matrices are too poor to produce clean casts. However, that is of no signifi¬
cance now, because by electrolysis we have succeeded in making perfecF repro¬
ducFions of the impressions struck in the original lead matrices. Our new types do
full justice to the skill of the punchcutter.

Who the punchcutter was I cannot tell with any assurance, but there is evidence
pointing to Cornelis Lettersnijder, mentioned in the previous chapter.1 He, it will
be remembered, described himself as calcotyyus, that is to say a cutter of punches in
brass. Moreover, the fashion of the letters dates them in the time of Albrecht Dürer,
and it was then that Cornelis flourished. Lastly, these leaden matrices came from
the typefoundry of Jan Roman & Company, who, as I have said, were successors to
the material of Cornelis Lettersnijder.2

script type of remarkable elegance. It is known that in 1557 the punchcutter Robert ,,ot flS518"eil

France, and a year later he printed with it at Lyons a little book entitled La civilité

puerile distribuée par petttz chapitres, et sommaires.^ The aim of the book was to teach children

how to behave in company and to read and write. Types of the kind were called

after the book, caractères de civilité.5

Following Granjon's lead the Flemish printer Ameet Tavernier, who was also a
punchcutter and typefounder, made type for the Flemish cursive hand, and with
it he printed, among other books, Die fonteyne des levens in 1564.6 Although this little
lesson-book was not the only use to which Tavernier put his new types, he seems
to have had it particularly in mind when cutting the script. From then onwards
Civilité types were used for many years in schools as models for handwriting.

Taverniere work was extremely successful. Plantin was among the printers who
bought his types.7 From Plantin's press was issued in 1564 a book which commends
Civilité type as a means for teaching children to write beautifully and read cor-
reftly.8

It seems likely that Albrecht Hendricksz bought from Tavernier a set of strikes
for a type so much favoured by the printers of Antwerp, so that he might cast it
himself .9 In any case, Civilité type is to be seen in books that he printed. His owner-

[2] The propositions in this paragraph are disputable, ex- Ameet Tavernier, 15.

Jan Roman. Exaft counterparts of the letters can be seen on Italics in his early years. Later he discarded them in favour

in the second half of the sixteenth century. The oldest that Ameet Tavernier, punchcutter. De Gulden Passer 39,1961, p. 73.

I have seen are in T. Livius, Decades, with the imprint of Jean [8] Le Livre ríe Г Ecclésiastique, Carter-Vervliet 78, with an avertisse-

Frellon, Lyons. 1553. Later they appear at Frankfurt am Main, ment aux maistres d'escole at the beginning. It is set in a Civilité

e.g. in Plutarchus, Opera, D. and D. Aubry, 1620. Their geo- type, cut by Philippe Danfrie, for which Plantin bought

Sabon plausible. [9] Aelbrecht began to print some years after the death of

[4] This passage has been altered. The original refers to 1589 (Carter-Vervliet 255) he used a Civilité cut by Hendrik van

Zentralbibliothek, Zürich, has the edition of 1558, which ap- by forme van discours, Delft, 1584 (Carter-Vervliet 225) he used the

pears to be the earliest in Civilité type. one under discussion (Enschedé no. 8). Nothing in Messrs.

[5] These types are treated at length in Carter-Vervliet. Enschedé's collection is ascribable to Tavernier.