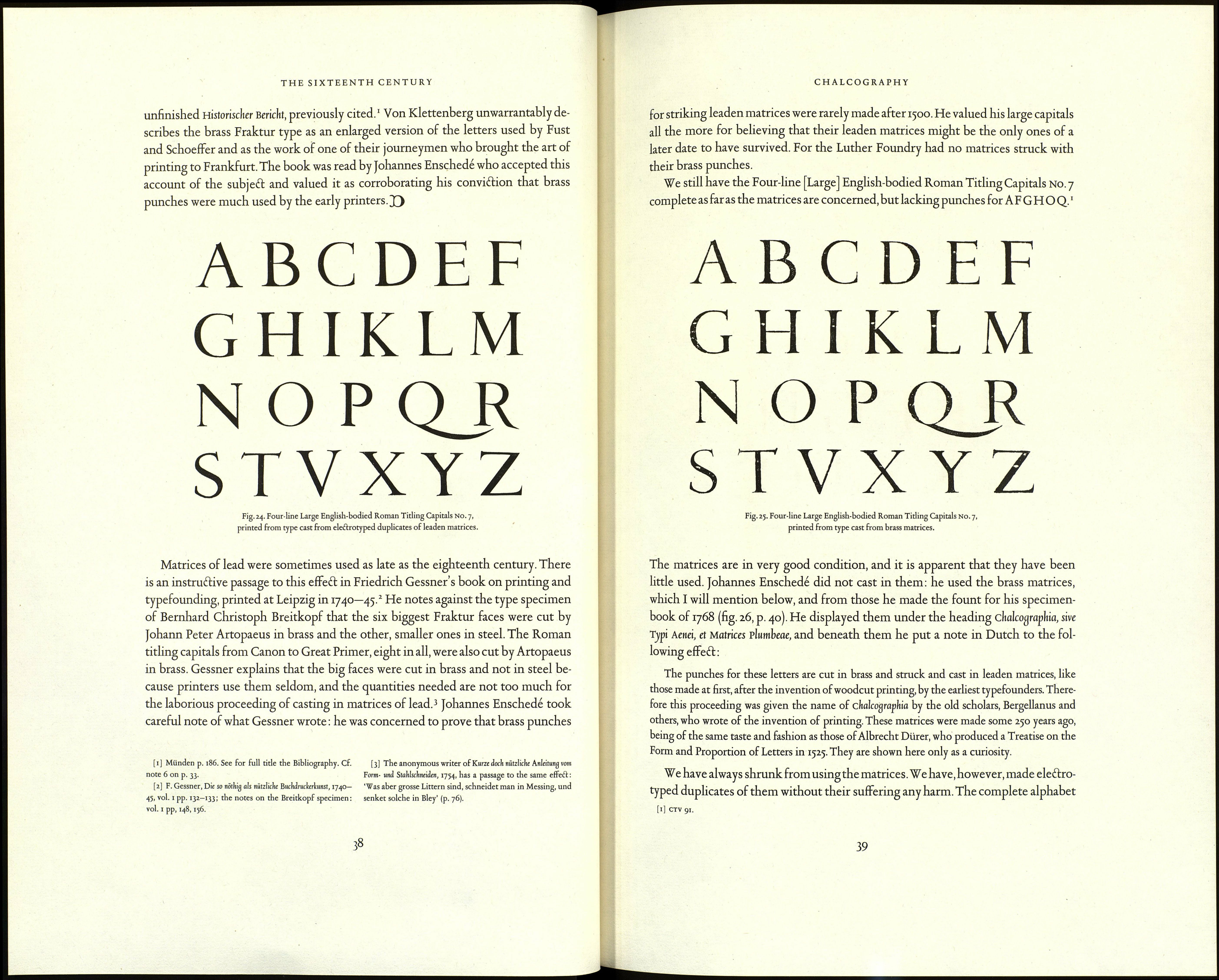 und zu verkaufen). Such pieces of copper struck with punches could be made by a
competent workman into matrices. The Frankfurt typefoundry, therefore, was
willing to sell the capital assets needed for setting up other typefoundries, and there
is some evidence of a later date of its doing so.1

Typefounders have always sold strikes one to another, though they have not
advertised the facF. In the sixteenth century, and even in the seventeenth, it was
common for printers to equip themselves with matrices, so that there must have
been a considerable trade in them. Cutters of punches made their living by selling
strikes and finished matrices. The sales were made at the fairs in Frankfurt among
other places, as Plantin's accounts show,2 and at the time of his death Plantin had
many of his punches, spare matrices, and strikes on deposit at Frankfurt in ware¬
houses which were unlocked only during the fairs.3 Guillaume Le Bé in Paris sold,
as well as bought, matrices and sometimes punches.« When printers died or were
sold up there were opportunities for buying such things, and occasionally mer¬
chants could ofFer them. 5 It must not be supposed that the Frankfurt foundry had
anything like a monopoly of this business.

With repeated striking punches, if they do not crack, spread and become de¬
formed, and the number of times that they can be subjected to this strain without
the destruction of a significant number and the spoiling of more mightbe estimated
at about twenty. It is not surprising that in subsequent specimens by the Frankfurt
foundry the offer of strikes is in more guarded terms6 or omitted, or that different,
and for the most part distinctly inferior, typefaces replace those shown in 1592.
Moreover, it is not necessary to read the offer as relating to all the faces displayed
by Berner, for some of which he certainly did not own the punches.7

have no regard to cutting & j ustifying, unies perhaps to supply annotated by Le Bé, preserved as ms Nouv. acq. fr. 4528. See

a Defeft, or two' (Hart p. 166). The foundry set up in Basle for literature about these specimens: E. Howe, French type

with matrices got from the Luther Foundry (G. Mori, Das Specimen Facsimiles 2, pp. 13—15.

Schriftgiessergciverbc in Süddeutschland, 1924, p. 16); for an extensive [5] At Amsterdam in 1672 Thomas Marshall was offered

account of this foundry see A. Bruckner, Schweizer Stempel- sets of Greek matrices by a merchant to whom they had been

the successors to Dietrich Gerlach at Nuremberg in 1579; for sale by Paul le Conte, merchant, at Amsterdam in 1665,

On the demise of Konrad Berner in 1606 the foundry passed to his widow and it
was still her property at the time of her death in 1625. It seems, however, that it was
managed on her behalf by Johann Berner, who appears to have been the owner
when he died in 1626. His daughter, Katharina, was his heiress. In November 1626
she married the typefounder Johann Luther, by whose name the foundry was known
to later generations.

The business remained in the Luther family until 1780, by which time its stock, jolmim Luther
still largely of sixteenth-century designs, had at last become old-fashioned; under
new owners the fortunes of the house declined, and the material disappeared
during the Napoleonic Wars. The last relic was the set of brass letters previously
mentioned.1

These letters are brass castings.2 They were kept in an old box on the lid of which ві-ass letters
was an inscription Capttonis Colliseli [sic] Current Dütsch fraktur. Dijsze beijde geschritten haben
ein instrument. Anno 1526 (Capito's Cöllnisch Current German Fraktur. These two faces have
one mould. Anno 1526). On the inside of the lid and on the frame of the box were
inscriptions, said to be in the handwriting of the first EgenolfF, which relate to 92
matrices for a Cursive (Italic) typeface belonging .to the Strasbourg printer Wolfgang
Kopfel, who latinized his name as Capito.3 The 79 Fraktur letters and 5 puncFuation
marks kept in the box in recent times fit a body about Six-line Pica (72-point). In
an article printed in 1935 these letters are described as examples of the cast brass
letters for which Sabon was given an imperial privilege in 1578.4 They were heir¬
looms in the family descended from the last of the typefounder Luthers.

The letters would have been useless to a printer unless he could reduplicate Leaden matrices
them, there being only one of each sort. It must be supposed, therefore, that they
were intended for making sand moulds or leaden matrices in which typemetal could
be cast, though the brass types could also be used for printing.5 In 1913—14 the
Stempel Foundry at Frankfurt struck leaden matrices with the letters descended
from the Luther establishment and cast an experimental fount in them.6

[3] A photograph of the letters in the box is reproduced
as an illustration in G. Mori, Die Egenoljf-Luthersche Schriftgiesserei
Plate II and in Schriftproben (see the previous note) following
p. 40.

[5] Wilhelm Haas, first of the name, typefounder of Basle,
showed letters in the same face in his undated specimen of
about 1770 and described them in French as 'Bronze letters
used for titles of a German Bible printed at Basle by Koenig
in 1650' (reproduced in A. Bruckner, Schweizer Stempelschneider
und Schriftgiesser, p. 86).