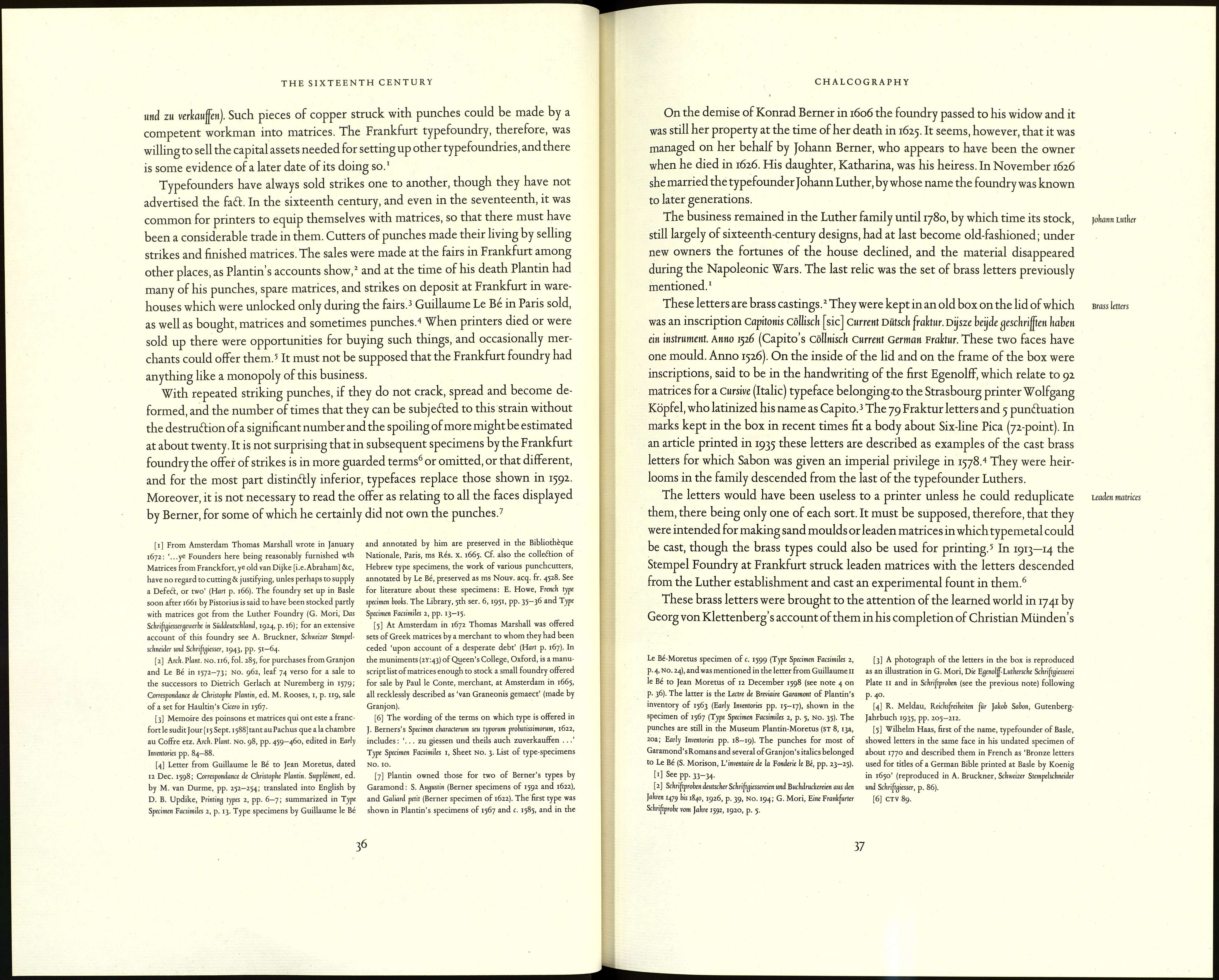 The Luther Foundry has a part to play in this history, and I may not unprofitably
devote some paragraphs to it and to the brass letters mentioned by Münden.1

(X The set of brass letters described in Münden's book belonged formerly to
Dr. E. J. Haeberlin, of Frankfurt am Main, a descendant of the family of Luther,
owners during the seventeenth and eighteenth centuries of the famous type-
foundry.2 The business was begun by Christian EgenolfT, a learned printer and type¬
founder who carried on both trades at Strasbourg for some time and petitioned for
the freedom of the city of Frankfurt in 1530. EgenolfT 's was the first printing busi¬
ness to be permanently seated in Frankfurt, a place famous for its twice-yearly book
fair. Perhaps because of its convenience as a meeting-place EgenolfF s printing office
came to be used by other printers as a depot for their punches and matrices, and
Egenolffundertook to cast founts for them. He may have been a punchcutter ; if not,
he knew where to find punchcutters. He is believed to have worked as early as 1524
as a typefounder for the Strasbourg printer Wolfgang Kopfel.

After the death of EgenolfF in 1555 his widow carried on the business of printer
and typefounder with the help of her sons-in-law. She employed Jacob Sabon, a
Frenchman from Lyons, as typefounder. Sabon began work for the Widow EgenolfF
in 1557, but after some years he went into foreign parts leaving some of his tools
behind him. At a summons from the widow he went back to Frankfurt in 1564, but
in April 1565 he was in Plantin's house at Antwerp, cutting punches, striking and
justifying matrices, and making type-metal.3 In 1571 Sabon married EgenolfF s only
surviving grandchild, Judith, and in the ensuing family settlement the typefounding
business and material was apportioned to her, so that in right of his wife Sabon
became the master typefounder.

This took place in the infancy of typefounding as a distincT: form of capitalist
enterprise. The specialised calling of a typefounder had existed certainly since 1500,4
but it was followed by small masters who cast type in matrices owned by printers ;
Plantin had been served by a succession of founders and casters, François Guyot,
Hendrik van den Keere, Sabon, Hermann and Amy ell de Gruyter, Thomas de
Vechter, using his materials ;5 as late as 1592 Gabriel Guyot at Rotterdam was a type¬
founder owning no matrices.6 Typefoundries stocked with matrices enough to pro¬
vide for the average needs of printers came into being soon after 1570 : about that

[1] Charles Enschedé was the first historian to appreciate
properly the importance of the Luther Foundry in the de¬
velopment of typography. His views were last stated in Die
Druckerei der Elsevier und ihre Beziehung zu der Liitherschen Schrift-
giesserei, in : Die Hochdeutschen Schriften aus dein i5ten bis zum i<)ten
Jahrhundert, 1919; translated into English by A. F. Johnson in
Signature 10, 1938, pp. 15—37. However, in the light of more
recent work his account of it in the Fonderies needs a good
deal of correction. I (H.Carter) have substituted the following
passage based mainly on Gustav Mori, Die Egenoljj-Lutherschc
Schriftgiesserei, 1926.

[2] It is not known what became of the brass letters after
the death of Dr. Haeberlin in 1925.

time Van den Keere in Ghent and Guillaume Le Bé in Paris besides the widow at
Frankfurt were in a position to supply the typefaces cut by the leading French and
Flemish punchcutters.

Sabon was a punchcutter too. Specimens of his Fraktur faces are known;1 and
his reputation for making big types was such that a body equivalent to five lines
of Pica came to be named after him in Germany, France, and Holland. He even made
steel punches and copper matrices for a Six-line Pica body. His method of casting
letters of copper, brass (perhaps strictiy latten), and bronze was protected by an
imperial privilege of 1578.2

Sabon died in 1580 and was succeeded as husband of Judith EgenolfF and type- конто« втіег
founder by Konrad Berner. The earliest specimen of the types of the Frankfurt
foundry known to us was issued by Berner in 1592.3 The specimen shows the mag¬
nificent French types of the middle and later years of the sixteenth century by
Claude Garamond, Robert Granjon, and Pierre Haultin, Latin and Greek, and a se¬
lection of arabesque and other type ornaments by Granjon and Sabon. 4 Unlike most
sheets of the kind this gives attributions to punchcutters: attributions generally,
but not wholly, reliable.

The specimen sheet, a broadside measuring 48 by 30 cm., was probably meant
to be displayed in the booths of booksellers at the Frankfurt fairs and, according
to an advertisement at the foot, was calculated primarily to interest authors, though
typefounders, printers, and letterers were also expecFed to find a use for it. It served
as the model for specimens issued afterwards by the typefounders of Europe, many
of which are noticed in the pages of this book.

Little is known of Berner; but it is reasonable to suppose that the collection
advertised by this specimen, if not the skilfully and artistically composed specimen
itself, was made by his predecessor. Sabon had the necessary acquaintance in France,
and he may have had the opportunity while working in Antwerp to acquire strikes
from punches owned by Plantin. The history of his acquisitions is, however, not
known.

by him in the privately printed brochure Eine Frankfurter Schrift¬
probe vom Jahre 1592,1920. Cf. J. W. Enschedé, Een letterproef van de
lettergieterij Egcnoljf-Luther te Frankfurt a.M. nit 1592, Het Boek 3,
1921, pp. 61—64. Type Specimen Facsimiles I, Sheet No. 2. See fur¬
ther: List of type-specimens no. 4. Charles Enschedé, when
he wrote this book, had not had the advantage of seeing this
sheet, which revealed the identities and origins of many
sixteenth-century typefaces. The only known copy is in the
Stadt- und Universitäts Bibliothek, Frankfurt a.M.

[4] Notes on the individual types are given in Type Specimen
Facsimiles 1, pp. 4—6.