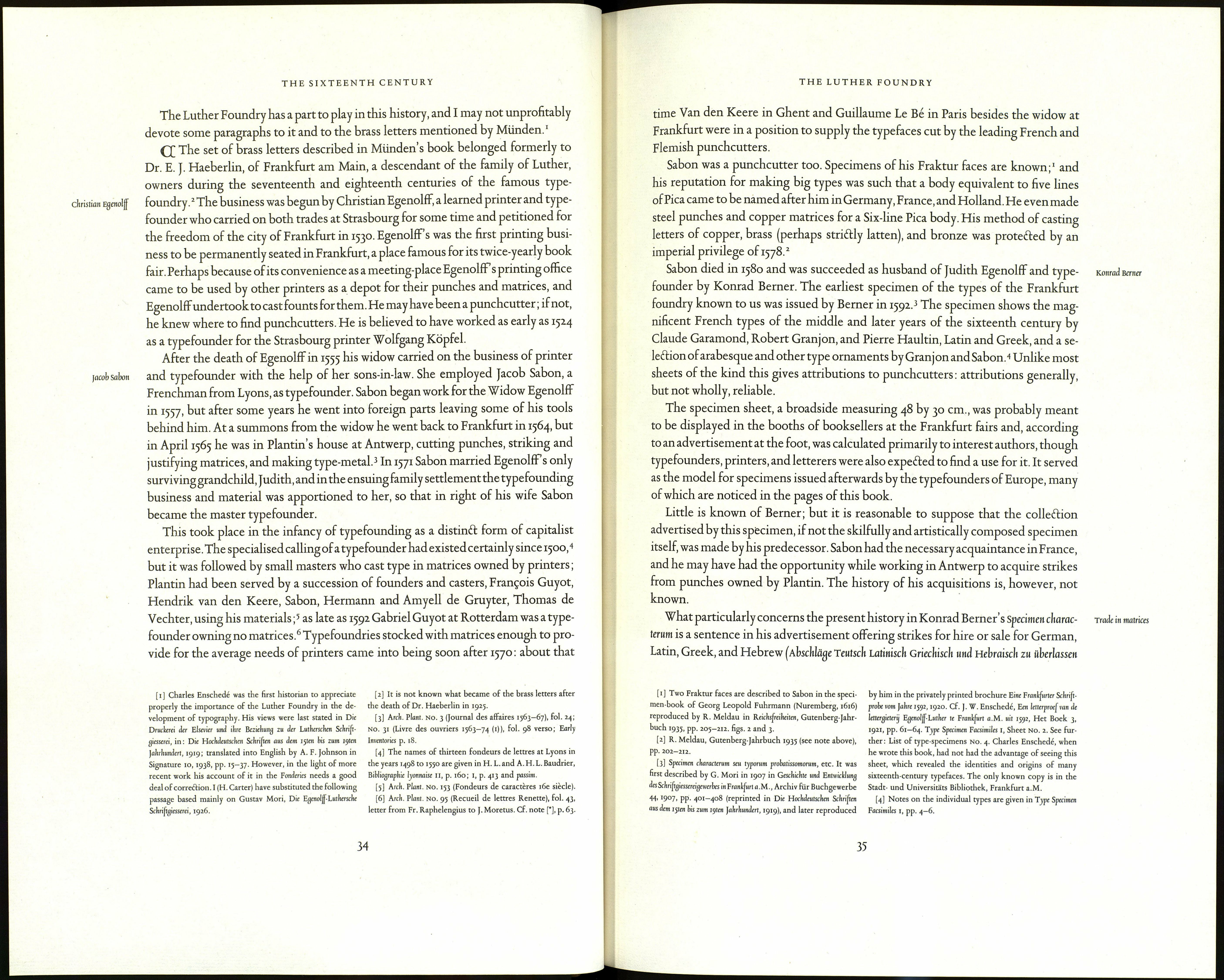 of type as a demonstration of the way in which fifteenth-century typefounders cast
three or more letters as one. He could not foresee that a hundred and twenty years
later a composing-machine would be made to work on this principle and so bring
about a revolution in printing. Nor could he have expected that his descendants
would one day make new matrices from his types. We made elecbotyped matrices
so that this type can now be cast once more. By adding to or cutting parts away from
existing letters we replaced many that were missing and for the few that could not
be remade in this way, the capitals H R T W, the lower-case r s w x, the figures 2 and
8 and the ampersand, we cut new punches.

The characters of the fount cast from the elecfrotyped matrices are:
13 capitals: BDFKMNOPSVXYZ

By adding 11 punches we completed a fount amounting with its double letters
and contractions to 99 sorts. The specimen in fig. 23 (p.31), shows, as we think, that
the outcome of our work was successful.1

[1] In order to emphasize the humanist character of this of the original. He copied this page from the facsimile in

The surviving material of this century in our collection is not very much, but it is
of great interest. We have a fount of titling capitals, five of Civilité scripts, two
sets of engrossing initials, and one Greek, all made from punches cut at the latest
by^.1

Four-line l^argej English-bodied Roman Titling Capitals N0.7, named 'chalcographia'.2 Unlike
the Civilité typefaces, which were made in the second half of the century, these big
capital letters go back nearly to the beginning of it. Apart from its design, this type
is interesting from a technical point of view. In discussing the Abecedarturn in the pre¬
vious chapter I noticed the long continuance of casting in leaden matrices, even after
the introduction of steel punches by Peter Schoeffer of Gernsheim.3 The reason
for it was probably the difficulty of driving big punches, even of hardened steel,
into material as resistant as copper. In the same chapter I also suggested an expla¬
nation of the poor quality of the type cast in these leaden matrices. It is not sur¬
prising that if lines of big letters were wanted in sixteenth-century printing, they
were nearly always cut in wood.4 Consequently, not many sets of leaden matrices
were made, and such as there were, not being very durable, have seldom come
down to us.5

My ancestor, Johannes, deals with 'chalcography' in his notes. He refers to a book
on early printing at Frankfurt am Main by Christian Münden, Historischer Bericht,
published in 1741, where it is observed that letters cut in brass, having served at some
time as punches, were preserved at the Luther Foundry in that city.6

[4] Reduplication of wooden originals by casting in type-
metal was also common. Wood letters and records of founts
made with them are kept at the Museum Plantin-Moretus.
There is a set of pattern letters cut in pearwood by Hendrik
van den Keere the younger in 1575 for a Grosse Romaine
extraordinaire; and he charged Plantin for casting a fount
of this face in sand moulds (ST 1, Early Inventories pp. 68, 73;
in Appendices 11 and in of Early Inventories: La plus grande
Romaine. Vervliet pp. 217-219, R 1, with reproductions). A Black
Letter, twice as big, is now represented by 58 patterns of
pearwood in the Plantin-Moretus Museum, ST 78, Early Inven¬
tories pp. 68, 75; Vervliet pp. 81-85, T *■ Van den Keere charged
for casting a fount of this letter in sand in 1580. Boxwood
patterns for 29 Lombardie capitals pour jecter en Sablón also
survive (ST 81, Early Inventories pp. 68, 75, Vervliet p. 209, U 2).

Other examples are collected in Moxon p. 371. It seems proba¬
ble, also, that printers reduplicated big brass letters (or had
them reduplicated by typefounders) in the same way, making
copies of them in type-metal. Cf. an item in the sale-
catalogue of the printing equipment of Joannes Janssonius,
Amsterdam, 1666 (Oxford, Bodleian Library) ; see Copy and Print
p. 125, offering (in Dutch) 'Capitals of pattern letters (pntrooneit)
of the largest size, cast, some in brass, some in lead'. (H.C.)

[5] Leaden matrices for big (Canon) capitals begun by
Garamond and completed by Jacob Sabon and Hendrik van
den Keere the Younger are in the Museum Plantin-Moretus,
classified as ma 9. They are entered in an inventory of 1588
(Early Inventories pp. 18, 86, 87) as Grosses Capitales Extraordi¬
naires. Copper matrices, MA 78, had previously been made
with the same punches, ST 3 (Early Inventories pp. 44-45)-

[6] For Johannes Enschedé's opinion on chalcographia see
p. 2. It can be found in the notes entitled Nota wegeus de cerstc
Frankforise dYtikkerij, CTV 578 d, in which Johannes Enschedé
refers to the book of Chr. Münden. For the full title of
Miinden's book see the Bibliography.