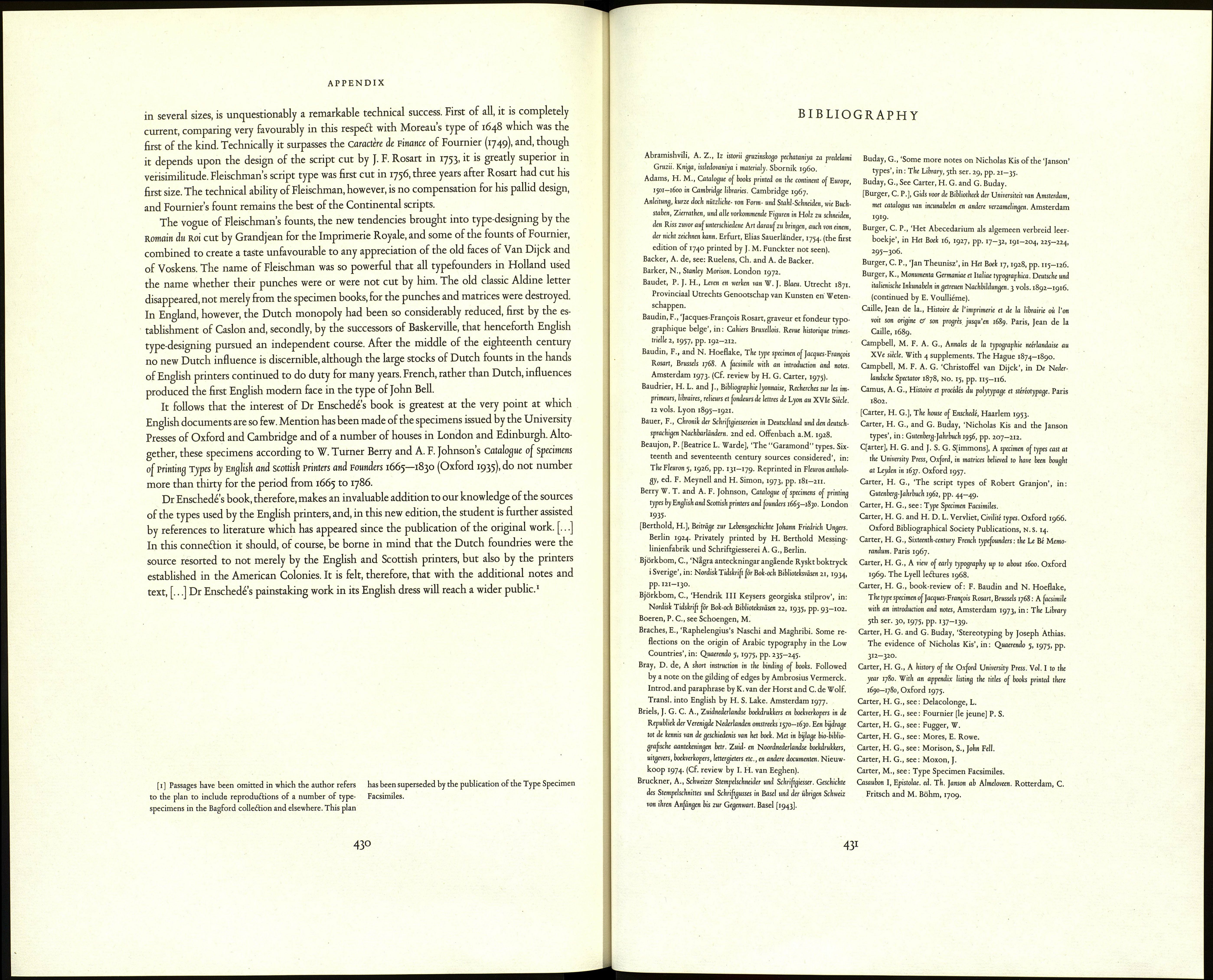 fearful that I should steal some of their art from them. Cupi was not very forward to let me see
his work-house, and the first time avoided it by saying he could not stay for he was just going
out, but the second time I did see it tho' he was as loath then as before, saying he believed there
was nobody at work; but I told him the person who was with me wanted to see the trade and
he would oblige me by shewing it. he had places for four to work although there was but one
casting. I did not ask Rolij to shew me his work-house the first time I went to him, but the second
time I went up and saw places for four men and nobody at work. I asked him where his men
were: he told me they were gone to a fair at Harlem, but I believe he had lent them out as well
as his matrices to some other Letter-founder, as I was going along the street with him he told
me there was an English gentleman that had lodged at such a house (pointing it out) for whom
he had cast 300 £. worth of work not long ago, which if true must have been for Tonson.

I have bought of Rolij in all thirty sets of matrices besides the box of flowers, and 15 molds
made of brass, as almost all the Dutch molds I saw were. Mr cupi has in all but eighteen sets of
matrices, but is continually as I hear cutting more, designing in time to set up printing and
book-selling too. he is a very close and very civil fellow. I do not know but one time or other
I may take another trip into this country for matrices, for there's no trusting to any body here
to manage business for one: there's hardly such a thing as an honest man to be found, they all
live by buying and selling, and whatever they can bite any one of they count it fairly got in the
way of trade. I hear but a very indifferent character of the young man the broker who interprets
for me. he is very expert indeed at that, and I do not know what I should have done without
him: but I am informed that if it lay in his power to come at any of my money, he would con¬
trive some way or other to cozen me of it, or part of it at least; for which reason I took particular
care, he stood very hard with me for a gilder per cent, for every hundred I laid out. the molds
and matrices together stand me in* I have inquired very diligently of abundance of Printers,
Booksellers, and of Mr Rolij whether there are any Letterfounders at Harlem, Leyden, The Hague, Delft,
or Utrecht. I was told by some they knew of none; and by others that there were none; and Rolij
assured me there were none at any of those places; and I myself saw at Foskins's a box with letter
in it directed for Utrecht, and it seems very probable there may be none at any of these places
because letter may be sent from Amsterdam to any of these places as cheap by water as a porter
in London will carry a burthen half a mile, the box of molds and matrices which I bought was
brought hither from Amsterdam for 12 stivers into the house, the distance about 40 English miles.
I am told there is one Letter-founder at Tergoest but I can't hear of one English-man or English-
house in the whole town, however I'll endeavour to find the Founder before I leave the country.
I have been through Tergoes three times, and as often through Harlem, Leyden and Deljt, but never
made any stay in any one of them. I have been twice to the Hague, but at such times that I could
not see the states-house, the town is very fine, one's charges thither and back again are not
above a gilder, 'tis very easy, and travelling would be very pleasant if one were not destitute
of company'.

Poor as are the founts which James purchased, they were much used by the English printers
until, from 1720 onwards, they were superseded by Caslon's. Even then Dutch types continued
in use in England and, towards the end, they were bad types of an inferiority which would have
surprised Moxon. Before the revolution which followed Caslon's success, Dutch types were in
as much demand at Cambridge as at Oxford and London. Marshall reports that 'the man

(Valette) had furnished divers in London & Cambridge'—and all over England. Reference to
the Cambridge Press accounts indicates that although founts were regularly bought from the
Dutch founders there was no attempt by the University to set up a foundry in rivalry of the am¬
bitious programme which Fell initiated at Oxford. The Specimen of Letters belonging to the university
of Cambridge, though issued circa 1730, shews four sizes of titling, 18 Romans and Italics, five Greeks,
a Hebrew, an Arabic and two bodies of English Saxon. Some of these are obviously printed from
worn founts surviving from the seventeenth century. Two or three of the Romans are identical
with corresponding sizes of the Fell types. The bulk of the founts displayed are obviously Dutch.
The 'old great primmer' and the 'oldest great primmer' are from Van Dijck's foundry. Cambridge
bought from Bus; the widow Voskens and Pieter Ouleander in Amsterdam, and from one
Dirk Pennington of Antwerp. Somewhat curiously, the 1730 sheet displays only one size 'Best
Great Primmer' from Caslon's foundry. The specimens issued by James Orme (1698), Hugh
Meere (1710), Benjamin Motte (1713) in London rely exclusively upon Dutch material. The
specimens of James Moncur of Edinburgh (1718) and James Watson (1713) already mentioned,
are made up almost exclusively of Dutch material. Mention has been made of these specimens
as some sort of indication of the prevalence of seventeenth-century types and designs in the
period immediately preceding the establishment of the first modern, mature, London type-
foundry by William Caslon in 1720. The founts cut by Caslon were confessedly fashioned ac¬
cording to Dutch models. Their penetration into English typography was naturally gradual. It
was, as naturally, even more gradual in the American Colonies. Benjamin Franklin's Pennsylvania
Gazette was printed throughout in Dutch types in the 1730's, and they blended satisfactorily
with founts cast from punches and matrices which Caslon was able to purchase in the open
market and which had descended from Moxon, Grover, Andrews and Mitchell.

There had also been changes in Holland. The Voskens foundry was active until the year
1780. R. G Alberts and H. Uytwerf were new establishments at The Hague, but the materials
of Van Dijck were dispersed among several houses in Amsterdam, where, however, no new types
of a similar design appear to have been made. In fact, the fine period of Dutch typefounding
seems to have ceased with the beginning of the eighteenth century.

An entirely new period in the art was initiated by the German, J. M. Fleischman. He left his
native place, Nuremberg, where he had served his apprenticeship in typefounding, and was
given work at Frankfort in the typefoundry of Luther. He only remained there a year before
moving to Holland. He was engaged exclusively by the founder, Uytwerf, from 1732 to 1734,
cutting a series of designs in which the classic Aldine design which had descended to Garamont,
Granjon, Sabon, Voskens, Van Dijck and Schmidt suffered attenuation hardly welcome to con¬
servative typographers. It would appear from the scale of the letter that it was designed rather
for the composition of news-letters and news sheets than for books. It is possible that further
search might reveal the use of Fleischman's types in England, but it can be confidently asserted
that no English typefounder saw any advantage in going abroad for Fleischman's founts after
the establishment of Caslon's foundry in London. Fleischman's types, however, had a good deal
of influence in Holland and, in consequence of the large share of printing for the Paris book¬
sellers which the Dutch houses enjoyed, the new faces influenced Fournier. They were copied
elsewhere, and later, when the foundry of Wetstein passed into the possession of Enschedé, the
materials of Van Dijck, which had also passed into the same hands, were destroyed in order to
make room for the modernised old style invented by Fleischman. This cutter also produced
a Black-letter design manifesting the same tendency towards an increased contrast of the thick
with the thin lines which may be seen in the Roman. The Latin script type, cut by Fleischman