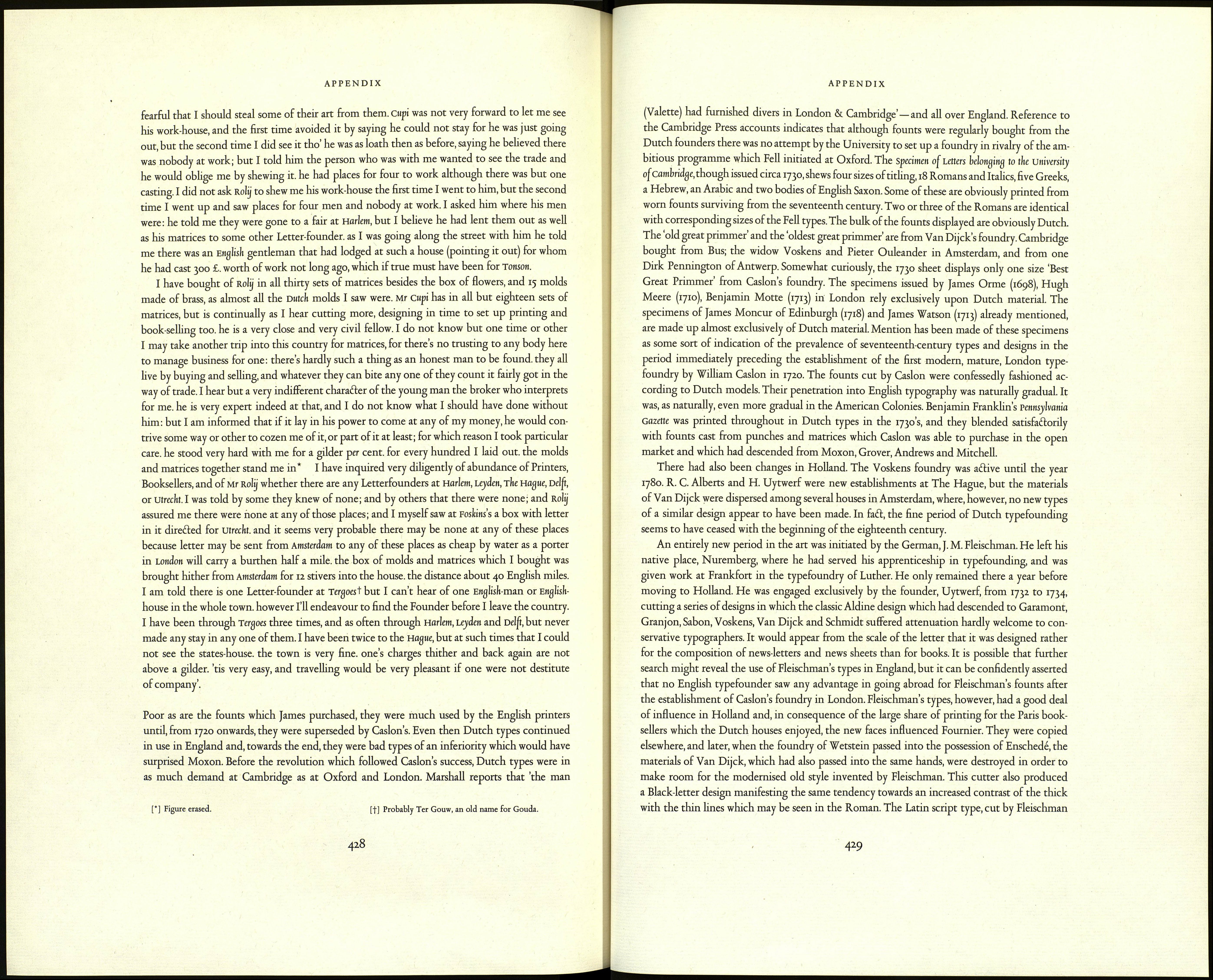 Frakturs and secretary which the late Gustav Mori regarded as being published circa 1670. «
Reinier Voskens material seems to have been secured towards 1675 by Johann Adolf Schmidt,
whom we have already mentioned. The Romans and Italics cut by Reinier Voskens number
seven sizes; all are mediocre versions of the Garamont and Granjon patterns. What happened
to Reinier Voskens or his material is unknown. Schmidt, as we have pointed out, removed
before 1695 to Amsterdam, where he cut and founded types of a very high quality in design.
That his specimens circulated in England is proved by the surviving copies in the Bagford
collection. I am disposed to believe that the excellent Great Primer Sclavonian now at Oxford
was obtained from this source.*

Dealings of English printers with Amsterdam founders were not always rapidly or happily
conducted. Thomas James, a London founder who went to Amsterdam in 1710, found 'the Dutch
Letter-Founders are the most sly and jealous people that I ever saw in my life'.t He saw Athias,
Bartholomew Voskens Jr (he calls him 'Foskins'), Rolu and Cupy. James wished to buy matrices
and punches. Punches he failed to secure, but he managed to purchase a large box-full containing
some 3500 matrices of Romans, Italics, Greeks, Blacks and flowers. The difficulty in securing
punches was due to the fewness of the cutters. 'I was obliged' says James 'to agree with Rolij
upon his own terms... since himself and Cupi are the only Letter-cutters in this country'.í He
found that 'Foskins is a man of great business, having five or six men constantly at the furnaces,
besides boys to rub, and himself and a brother to do the work'. Rolu told James of an English
gentleman that had lodged at a certain house, which he pointed out, for whom he had cast
£ 300 worth of work not long ago, 'which, if true, must have been for Tonson'. A generation or
more before, Marshall had foreseen that 'we English must learn to use our own hands at last to
cut Letters as well as print with them. For ye Founders here being reasonably furnished with
Matrices from Francfort, ye old Van Dijck etc. have no regard to cutting or justifying unless
perhaps to supply a defect or two. So that some famous cutters, they say, are gone to other
Countries for want of employment'. The specimens in the James' Sale Catalogue prove that he
was sold a miserable collection by the 'sly' Dutch founders. But that the skill of Rolu was vastly
inferior to that of Van Dijck is proved by the large Proeven van Letteren Dewelcke geboten worden by
Mr. Johannes Rolu, Letter-Snyder, woonende tot Amsterdam, in de lauste Lely dwars-straet. The Roman types
on this specimen do not compare with those of his predecessors. Exactly how James fared is
accounted graphically in a letter from James at Rotterdam to his brother in London :§

'You are desirous to know whether the matrices I have bought excel those which are in the
hands of the Letter-founders in England, the beauty of letters like that of faces is as people opine:
but notwithstanding I had no choice, all the Romans excel what we have in England in my opinion,
and I hope being well wrought, I mean cast, will gain the approbation of very handsome letters,
the ital. I do not look upon to be unhandsome, though the Dutch are never very extraordinary

[*] This opinion is confirmed by Mr J. S. G. Simmons in Publications, with introduction and notes by Harry Carter

is made, are printed in A Dissertation upon English Typographical [1] Now reproduced in Type Specimen Facsimiles 1, Sheet N0.7.

pp. 51 et seq. [Reprinted, retaining the same pagination, in type-specimens no. 16.
1961 as NS vol. ix of the Oxford Bibliographical Society

in those, an account of the names that I think I shall give the sets I have bought is as follows;
The largest size I shall distinguish by the name of Four-line-pica, the next by that of French canon,
the next by that of Two-line-pica: these three consist of Capitals only, the fourth size is a small
Canon ital. the fifth a Two-line-Eng. Rom. and ital. the sixth Great-primer Rom. of which I have two sets,
a great face and a small one, with one Ital. to them both, the seventh size is an Eng. Rom. and
ital. the eighth a pica of which I have three sets Rom. and one Ita!, the ninth a small pica Rom. and Ital.
the tenth Long-primer, three sets Rom. and one ital. the eleventh Brevier Rom. and Bol besides these
I have one set of Great primer Greek one of Eng. Greek, one of pica Greek, one of Brevier Greek, as also
one set of pica Black, and one of Brevier віаск, together with matrices of divers sorts of flowers
used as ornaments in printing; to which I have fifteen molds, all the sizes except the three first
have capitals, small-letters, double-letters, figures and points, as also all the accents, amounting
in the whole to the number of 3500 matrices. As for sets of Nonpareil and Pearl I am informed
nobody in this country has any but the Jew whose name is Athias. him I was with first of all, who
assured me he would part with none of any size whatever; as did likewise another man whose
name is FosUns. the next I went to was Cupi by name, he said he must consult a friend of his before
he could give me any answer, which friend being gone out of town it would be two or three
days before he could certify me. the next and last I went to the same day: his name was Rolij, а
German by Birth, him I soon perceived I should agree with, as afterwards I did. but before I went
to him I called upon Cupi, he told me he would sell no matrices, but he would cast me as much
letter as I would have as cheap as any body. I went to him before I agreed with Rolij, because I
would see which would sell cheapest, but finding them all so inflexible I was obliged to agree
with Rolij upon his own terms, who however did not know but I had come to him first, since
himself and Cupi are the only Lettercutters in this country, and he did not imagine but that
if he would not have sold me matrices Cupi would, as I found by him afterwards, when Cupi
perceived that Rolij would sell me some matrices (as indeed then Rolij and I had agreed and he
received 1700 gilders in part) he comes to the Exchange-Broker and told him he would sink
his puncheons again and in half a years time deliver me all the matrices he has, perfect, after
the rate of* per matrice, but that except I would take all one with another he would sell
none at all.

His Rom. letters are very handsome and his italic's ugly, but all printed upon a proof of the
best paper; with all the care taken in composing and printing imaginable, which adds much
to the lustre of his letter, in a book it is quite another thing; not so handsome as Rolij's whose
letter in the proofs I could see in matter looks much better than it does in his printed Speci¬
men, which is done with all disadvantage, being wretchedly composed and worse printed off,
upon very sorry paper, however I can see when letters are well proportioned. I have two Specimens
of his letter in matter which look very beautiful. Rolij says whatever matrices I shall want whether
great or small he'll cut 'em for me as soon as I give him orders, provided it happens before a
peace.t he told me likewise he would see if he could procure any Nonpareil and Pearl of the Jew,
I allowing him a reasonable profit for his pains. Rolij says he was the man who made Foskin's
father by the letter he cut for him. Foskins is a man of great business having five or six men
constantly at the furnace, besides boys to rub, and himself and a brother to do the other work,
how many men the Jew keeps at work I do not know, for he would not permit me to go up
into his work-house. Foskins thought I wanted letter to be cast, but when he knew that I was a
Letter-founder he looked very sly, and watched me as if I had been a thief, being I suppose very