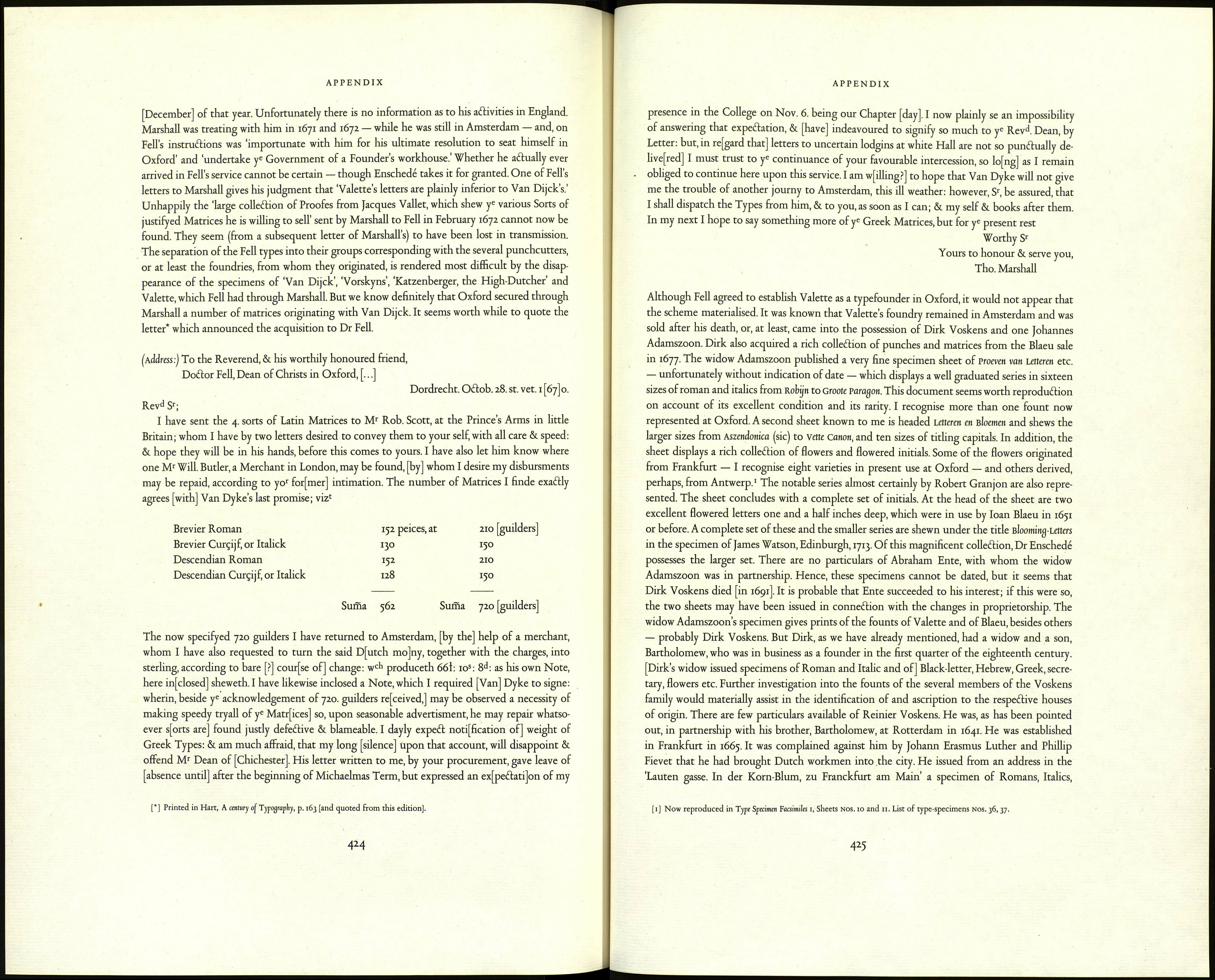 to Amsterdam in 1685, where he cut an excellent Paragon and mediaen Roman and Italic with his
eye on the English market, and offered to sell punches and matrices: 'nb jeden Letters in staal de
schneiden, 25 steijher,jede Matreijse 6 steijber Justin te sammen dat stuck staal en Vupere matreijse 31 steijber'.1

There was, as the result of these commercial arrangements, a community of material, and a
consequent similarity of typographical execution, in the printing offices of Frankfurt, Amster¬
dam, Leyden and London. The Elzeviers, established at Leyden since 1583, depended upon the
Luther foundry for the matrices from which they cast their own types. They did not rely ex¬
clusively upon the efforts of the celebrated Christoffel van Dijck, as Willems claims and as
Enschedé disproved. Of fifty-nine founts used by Johan Elzevier at Leyden in 1658 only two or
three originated with Van Dijck, the rest of the Romans, Italics and Greeks having been bought
from the Luther foundry. Francis Junius, the benefactor of the Bodleian Library and of the
Clarendon Press, bought a set of punches and matrices of Saxon in 1654. Later he bought Gothic,
Runic, Icelandic and a 'pretty Black' which are all at Oxford today. Although Junius bought
these in Amsterdam, they, or some of them, are Frankfurt designs originating, perhaps, from
Luther. The Pica Icelandic shewn by Horace Hart* on p. 39 is the classic Schwabacher of the
precise design which Johann Erasmus Luther shews in his 1678 specimen.

Rapid progress in typefounding seems to have occurred between 1650 and 1675. In 1654
Daniel Elzevier left his brother, Johannes, at Leyden and established himself in Amsterdam, sell¬
ing founts generally. He was not then himself a punchcutter, but a typefounder, selling founts
but not matrices. The number of punchcutters at work in typefounding centres, whether Paris,
Frankfurt or Amsterdam, would neccessarily be strictly limited, since it is a most exacting occu¬
pation requiring the utmost expertness. As was the case in Italy in the fifteenth century, the
punchcutters were recruited from the ranks of the goldsmiths. Unquestionably, the finest
punchcutter whom the Dutch can claim was [...] Christoffel van Dijck. Moxon is undoubtedly
right in singling out his founts for highest commendation as Van Dijck's founts are not inferior
to those of Garamont or Granjon. In some respects, they are even superior, in others not so
good. Their proportions are a trifle rounder, which is a welcome difference, but, on the other
hand, their thick main strokes are less graceful. But his text and augustijn Roman and Italic are
amongst the finest achievements of the craft. Van Dijck practised first as a goldsmith and type¬
founder, and later as a typefounder only. The first document known in which a business arrange¬
ment is made between this typefounder and the printer is dated 1650 and arranges for the
supply of 148 matrices of a small roman fount. [Until his death in 1669] he was busy as a punch¬
cutter, contributing one or two faces which must rank among the very best ever produced in
the history of the art. In his own lifetime, he enjoyed a very high reputation. Although Moxon's
commendation was printed after Van Dijck's death, his reputation was well-know to Fell's agent
in Holland, Thomas Marshall. The widow of Daniel Elzevier wrote to the successors of Plantin
when she desired to dispose of the material [her husband had acquired], that Christoffel van Dijck
'was the cleverest master of his time and ours'. Allowing for the fact that the widow Elzevier
was anxious to sell, there will remain no doubt in the mind of anybody who will study the
text and augustijn on the undated sheet issued with the attribution Die ¿jesneden zijn door wylen
christojjêl van Dycli, welke te beVomen zyn op de Nieuwe Heere Gracht [...] Amsterdam.2 This sheet is of addition-

[*] H.Hart, Notes on a century of typography at the University Press, must have confused a reproduction of the type-specimen

[1] Now reproduced in Type Specimen Facsimiles 1, Sheet no. 14. contents with his observations, with the specimen-sheet of the

[2] When writing the following remarks Stanley Morison omitted in consequence of this error.

al interest since, alone among Dutch specimens, it comprises an Engelse Nonpareil Romeyn and an
Engelse Nonpareil Cursiv, both specimens being printed in the English language. Furthermore, the
Ascendonica Romeyn is identical with the Fell Double Pica, a specimen of which may be seen in
Horace Hart's Notes on a century of Typography ...at Oxford, p. 16. This sheet (issued after Van Dijck's
death, which took place [in 1669]) consists of 38 Romans and Italics, eight Black-letters and
two founts of musical notation. Only a minority of the exhibits can have been cut by the
master himself. The paragon cursijf for example, was clearly cast from strikes obtained from the
Luther foundry; it is identical with the fount ascribed in the 1592 specimen to Granjon. There
is a Brevier Italic with a definite note, Brevier Cursiv Granjon, but this is the only ascription on the
sheet. I am myself disposed to believe that the text italic, augustijn, the mediaen No. 2, and perhaps
the joly are certainly cut by Van Dijck. A type of some interest is the Italic entitled Mediaen Cursijf.
If I am not mistaken, this is identical in face and size with the Pica Italic given to the University
of Oxford by Mr Francis Junius in 1677. No matrices or founts remain, but there is a facsimile
at p. 40 of Hart's Century. [...]

As Dr Enschedé points out, the circumstances attending the sale of the Van Dijck material
in 1681 were curious. A combination of Dutch typefounders, headed by Dirk Voskens, endeav¬
oured to prevent the commercial use of the material by obstructing the employment by Athias
and his agent, Bus, of the requisite assistants. Dirk Voskens, who took a leading part in the
organisation of this opposition to Athias, was one of a family, notable in the typefounding trade,
originating in Rotterdam. The first members of whom information exists were Bartholomeus
and Reinier, who appear to have been in partnership as typefounders as early as 1641. Barthol¬
omew Voskens, who appears as the sole owner of the foundry after 1646, is to be found at
Hamburg between [1655] and 1667, where he sold Romans and Italics, Hebrews and Frakturs. The
Frakturs were probably cut by Bartholomew Voskens himself at the instance of Philipp von Zesen,
a Lutheran bent on introducing the use of Fraktur into Dutch printing. The Romans and Italics
offered by B. Voskens at Hamburg are excellent in cut;1 some of them, e.g. the philosophie of
Robert Granjon, clearly came from the Luther foundry at Frankfurt. It is difficult to trace the
subsequent career of these Romans. Bartholomew returned to Amsterdam, to die there too soon
to be met with by Fell's agent who went to Amsterdam for the purpose of ordering punches
from him. The Frakturs were undoubtedly carried back by Bartholomew, for there exists in the
British Museum a sheet2 headed Proben und Abdruch Teutscher Schriften welche zu bàomen seyn bey mir.
Alida Coesvelt, Wüdwhe von Dtderich voshns. The sheet adds at the foot a notice that Ist auch bey mir zu
beVomen alle Lateynische wie auch Griexsche und Hebreische Schriften vor ein billigen preiss. This 'Diderich' is
Dirk. He died [in the year 1691], leaving his foundry to his widow, who sent specimens of
Romans, Italics and exotics to the London booksellers. The material which came into the hands
of Alida Coesvelt was a very fine collection; how fine it may be seen if her sheets are compared
with that of Rolu to whom we shall refer infra. The Voskens' Roman and Italic material has con¬
siderable importance to English typography, for it comprised the founts of one Jacques Valette
with whom Marshall had 'divers solemn conferences about all his Latin matrices which he is
willing to sell off.'

Jacques Valette, (Jaques Vallet as he appears in Dutch documents) was born in Geneva. He
spent some seven years in London, apparently between 1630 and 1640. He was not a punch¬
cutter; at least when Marshall had his 'solemn conferences' he refused to cut 'Punitions.' His
career as a typefounder in Amsterdam occupied the years from [1645] to V^lA — he died in