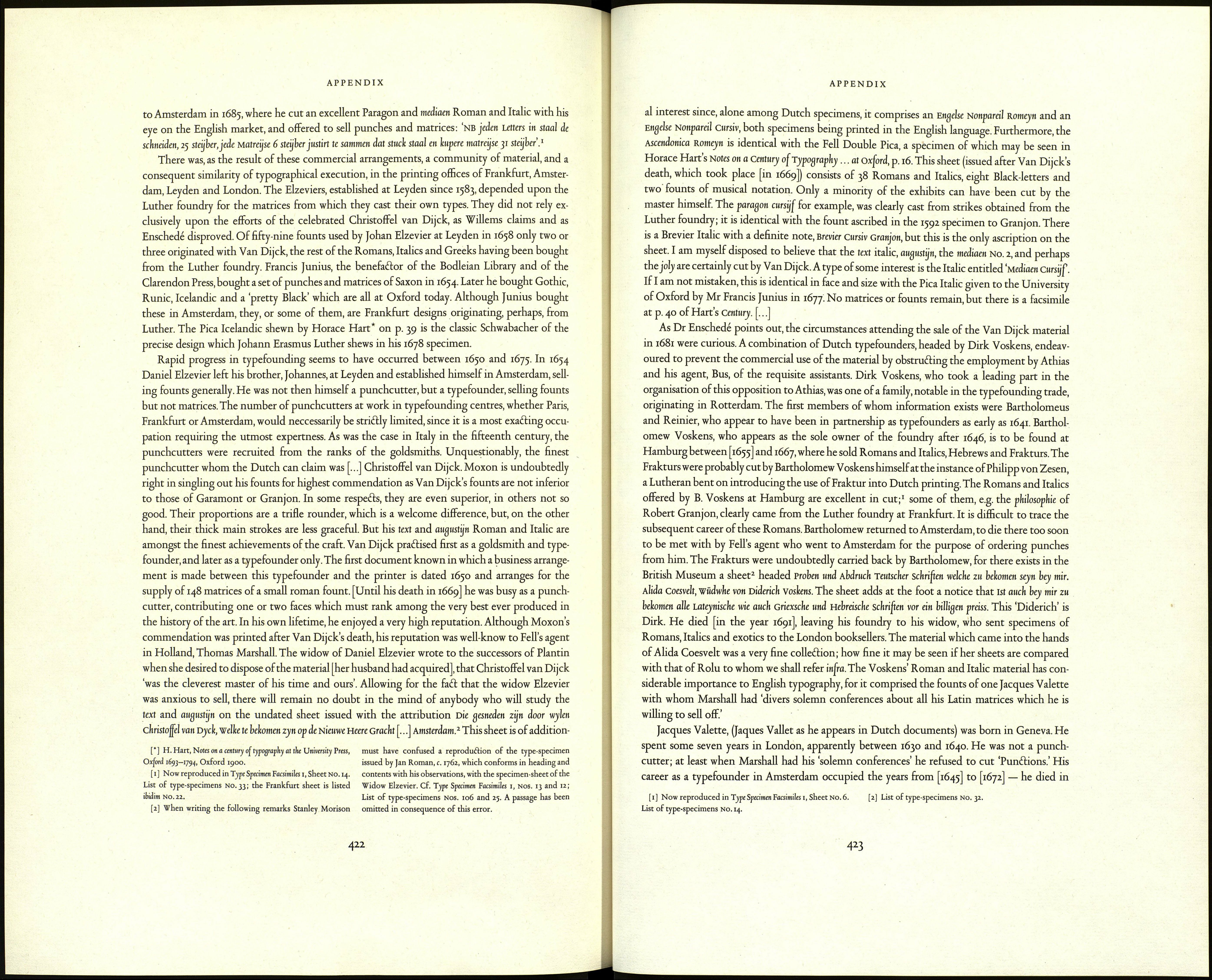 directly or indirectly for supplies of their types from typefoundries at Leyden and Amsterdam.
In faci:, the dependence of English printers upon Dutch founders was next to absolute for
more than a century and a half. As a living testimony to a former monopoly, founts cast from
Dutch punches and matrices are still in regular day-to-day use in the Press of the University of
Oxford. The student of English typography who wants to know whence English printers secured
their founts must, therefore, take a very considerable interest in the Dutch craftsmen who
supplied the bulk of materials with which English literature was printed during the second
half of the sixteenth, the whole of the seventeenth and part of the eighteenth century. The
difficult task of attaching dependable ascriptions to the founts which served English literature
during this period is rendered easier by the publication of works of which Dr Charles Enschedé's
is chief in importance and in authority. It represents a closely documented account of the
history of founders and all such of their founts whose existence has been traced. Dr Enschedé's
position as the head of the ancient foundry at Haarlem, itself a repository of a vast collection
of punches inherited from historic houses representing five centuries, gave him the motive to
trace the career of these ancient properties. His zeal to do the job thoroughly determined him
to offer his illustrative material in the most convincing form, viz. of new castings from the
original punches, many of which had earlier served foreign markets, including the English trade.
These original materials in the Enschedé office comprise punches cut by Robert Granjon,
Christoffel van Dijck, Dirk Voskens, J. M. Fleischman, J. F. Rosart, [...] to mention the best-known
names. Dr Enschedé's work, therefore, presents a unique collection of typographical documents,
plus an historical commentary only possible to a typefounder who is also a scholar. The book,
though not representing a complete history of all the founders at work in Holland from
Henric Lettersnider to the twentieth century, gives us the detailed history of more than two
score foundries which came into the hands of Izaak and Johannes Enschedé and their successors
between 1743 and 1901. Such defects as the book has are mainly due to the difficulty of con¬
sulting archives outside Holland. The libraries of Frankfurt-on-Main, Hamburg and London
contain documents unknown to Dr Enschedé which illustrate the careers of Bartholomeus,
Dirk and Reinier Voskens, of Martin Cupy, Abraham Ente and Johannes Rolu; therefore the
work of Dr Enschedé needs to be supplemented. This essay attempts a very rough indication
of the sort of investigation of related English sources which Dr Enschedé's book stimulates,
and but for which it would not be possible.

The English printers had, since their early days in the craft, been more or less dependent
upon foreign supplies. While there were certainly typefounders in London, appearances indi¬
cate that the quantity of imported type much exceeded that manufactured at home. John Day's
types were excellent; their excellence was due to his having expert foreign engravers in his
service. Before and after his time, it must have been cheaper to buy from abroad, and the
produci: was clearly better on the technical side. Local founders, with one or two exceptions,
were probably chiefly employed in making sorts and repairing matrices. Doubtless they were,
themselves, able to cut odd sorts of large sizes, and complete alphabets for use on title-pages. No
doubt Antwerp, with other Protestant centres, was a convenient port through which body-founts
and strikes could reach the Thames. Cambridge secured supplies of Dutch types through
Harwich. French founts were familiar to Catholics, whose Latin ritual books, still printed iuxta usum
insiflnis Ecclesiae Sarisburtensts, and vernacular meditation books were set in the types of Garamont
and Granjon and smuggled over from Douai. It was, however, not until the seventeenth century
that the Dutch typefoundries became sufficiently complete and well organized to take a domi¬
nant place in the sale of typographical equipment to English houses. Nor, in point of faci;, were

the Dutch foundries themselves independent of Antwerp and Frankfurt until late in the
17th century. The most eminent single source of the founts used in Northern Europe, including
England, during the period 1570—1620 was the foundry originated in Frankfurt-on-Main by
Christian Egenolffwho removed thither from Strasburg in 1530. He died in 1555, and his busi¬
ness came later, by a grand-daughter's marriage, into the hands of a very distinguished type¬
founder, trained in Lyons, Jacob Sabon. This founder was well-known in Frankfurt, having already
worked there before he left to aft as a sort of overseer in Plantin's typefoundry. Sabon left
Plantin's foundry in 1564, and, on leaving, perhaps purchased a number of strikes from Plantin.
On the other hand, as Robert Granjon, the famous Lyonnese punchcutter, was in Antwerp in
1566, he may have had dealings with him direct. In any event, when, in 1571, he married the
granddaughter of Christian Egenolff, that press and typefoundry was supplied with materials
which undoubtedly originated either from Plantin, Granjon or Garamont. The importance
of the Frankfurt Messe which attracted, twice a year, the whole of the printing, bookselling and
publishing trades, made the city the greatest typefounding centre of Northern Europe. The
works of Egenolff, Feyrabend and other printers successfully challenged comparison with those
of Plantin and the Paris printers. All are composed in fine types of standard Garamont and
Granjon design — the design which these masters had cut on the model of the fine Roman which
Aldus received from the hands of Francesco Griffo da Bologna, first used in Bembo's traft
De Aetna in 1495.

The death of Garamont in 1561 dispersed his collection of matrices and punches, some to
Frankfurt, to the hands of [Andreas] Wechel, and some to Antwerp into the hands of Plantin.
Some punches may have been acquired by Sabon from the same source. In the course of time,
Wechsel's material (matrices of two sizes of roman) found its way into Sabon's hands; and thus,
at his death in 1580, his widow, the former Judith Egenolff, was able to hand Conrad Berner, the
new husband she married in 1581, a collection of punches, matrices and founts unique in range
and excellence. We are able to judge the remarkable richness of this collection by the specimen
sheet issued in 1592 by Conrad Berner, who names himself and Jacob Sabon as responsible for
the collection.1 The sheet displays eight Italics, nine Romans, seven Greeks, a Fraktur and a fine
collection of flowers. The Romans and the Italics are ascribed, in their various sizes, to Garamont
and Granjon respectively. A note by Conrad Berner offers to sell strikes (Abschlage) of these
German, Latin, Greek and Hebrew characters. On Conrad Berner 's death in 1606 the business de¬
scended to his son, Johann, whose son-in-law next managed the foundry. He was Johann Luther,
a member, as Fournier oddly remarks, of the family 'si connu dans le monde chrétien'. It was his son,
Johann Erasmus Luther, who developed the commercial side of the undertaking, and made
Frankfurt of supreme importance as a typefounding centre. Doubtless he supplied matrices to
English founders. His specimen sheets, issued in 1664,1665,1666,1670 and [1678] respectively,
display a remarkably complete collection of titling letters, Greeks, flowers and Frakturs, in ad¬
dition to the inherited Sabon Roman and Italic. We must await the publication of the suite of
Frankfurt specimen sheets before thorough comparison can be made with the Dutch sheets
and the extent of their dependence upon Frankfurt sources adequately explored.2 In the mean¬
time, it is already known that Johann Erasmus Luther enjoyed a flourishing business in the sale
of matrices to Amsterdam houses.

There were several other founders in Frankfurt engaged in similar affairs. One of them,
Johann Adolf Schmidt, who issued a specimen of Fraktur faces from Frankfurt in 1675, removed