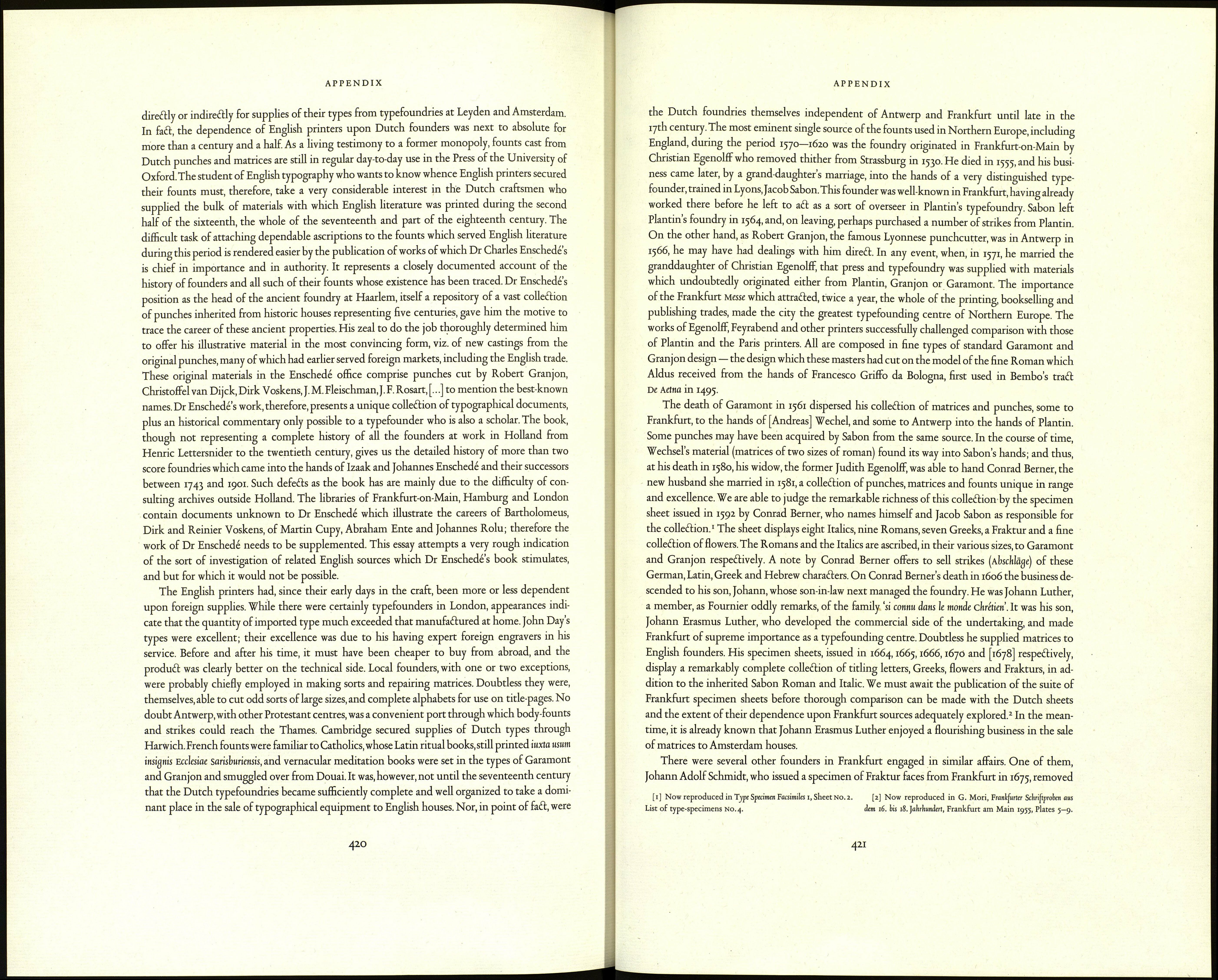 The publication of this English version of Dr Charles Enschedé's encyclopaedic work on the
history of the Dutch typefounders and their foundries is certain of a welcome from those
occupied with questions concerning the origins of typographical materials used by English
and American printers. The answer to the question: 'Why did English books and English news¬
papers of the seventeenth century look as they did?' cannot be attempted without a close
study of the contents of the foundries which supplied the English printers with their matrices
and types. The founders who supplied the bulk of the founts were Hollanders, hence the im¬
portance to us of Dr Enschedé's Fonderies de Caractères et leur matériel dans les Pays-Bas du xve au xixe
siècle. Notice historique principalement d'après les données de la Collection Typographique de ]ok Enschedé en Zonen
à Haarlem, first published in 1908 and now presented in English translation.

Joseph Moxon, the first English writer on the subject, of typecutting, gave as his judgment
that the 'late made Dutch-Letters are so generally, and indeed most deservedly accounted the best,
as for their Shape ... And for the commodious Fatness they have beyond other Letters, which
easing the Eyes in Reading, renders them more Legible; As also the true placing their Fats and
their Leans, with the sweet driving them into one another, and indeed all the accomplishments
that can render Letter regular and beautiful, do more visibly appear in them than in any Letters
Cut by any other People: And therefore I think we may account the Rules they were made
by, to be the Rules of true shap'd Letters.' This favourable opinion, given in the author's Méchamele
Exercises published in London in 1683, confirms what we know to have been the practice of the
University Presses of Oxford and Cambridge, both earlier and later than the time of Moxon's
writing. Although Moxon particularises the 'late made' letters, meaning the founts brought over
during 1670—1680, earlier Dutch letters were highly esteemed, and Dutch workmen produced
the Hebrew, Syriac, Arabic and Greek letters for English publications almost a couple of genera¬
tions before Moxon's time. There were Dutch punchcutters practising in London and practising,
at intervals, in the University towns. The expense-books of the two learned Presses contain such
names as [Härmen Harmensz] and Van Hoogenacker; printers and booksellers regularly drew

[1] In March 1932 Stanley Morison agreed to write an In¬
troduction to a projected English translation of the Fonderies
(see N. Barker, Stanley Morison, p. 321). Morison himself noted,
probably in the last years of his life, on one of the several
copies of proofs of this text that are now in Cambridge UL:
'written about 1932 for the English ed. of Enschedé, then or
thereabouts intended for publication, a plan not carried out.'
The present text, however, may not have been written until
after 1935, as the reference at the end of the text to the
Turner Berry-Johnson catalogue of that year seems to occur quite
naturally. Mr. N. Barker, to whom I owe this observation,
has suggested to me that the text may well have been written
between 1935 and 1937, during a period of close collaboration
with Jan van Krimpen (cf. Barker, op. cit., pp. 342 sqq). The
present text can be seen as evidence that Morison's intro¬
duction to the Fonderies helped him to clarify his ideas on the
study of typography, in particular of typography in England.
Many of the sources quoted by him, rare at that time, have be¬

come freely available in the intermediate forty years through
editions and reproductions ; and these have come into being,
partly at least, through his direi): influence. Although Mori-
son's text was set in proof, it does not have the appearance
of a final version. I have therefore treated it as work in prog¬
ress and I have made some corrections. The present edition
is based on the set of proofs which were kept at Johannes
Enschedé en Zonen. One of the other sets of proofs, now
in Cambridge ul, have corrections by A. F. Johnson and I
have incorporated these in the present edition. I am most
grateful to Mr. D. J. McKitterick for the information he has
given me about the proofs at Cambridge. The spelling of
proper-names has been brought into line with the form used
throughout the present book. Some corrections of dates and
facts have been introduced in order to avoid unnecessary
confusion; these are indicated in square brackets. Stanley
Morison's own footnotes are indicated with signs, the editor's
with arabic numerals. L.H.