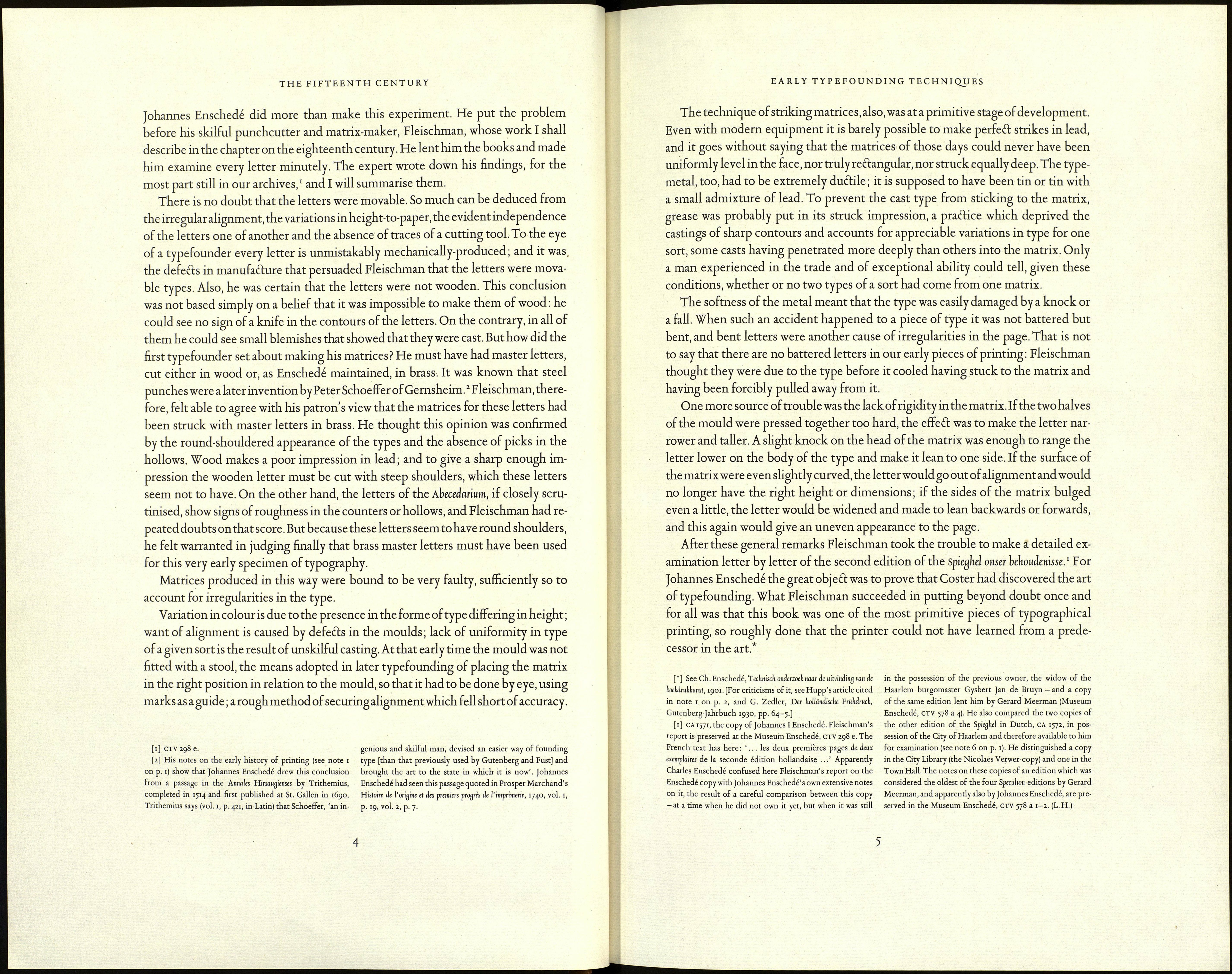 Nos. 2 and 3 are printed in the same type or, perhaps rather, in types made from
matrices struck with the same set of engraved originals. The type of the alphabet-
book is much ruder. Johannes Enschedé thought it earlier than the other two.

At the time when books were printed from woodblocks someone had the idea of
composing a forme with movable types. If this amounted to an invention, it was
the invention not of printing but of typefounding. The alphabet-book is the kind
of thing to which the new technique would first be applied. It is a little book for
children containing four prayers, printed from movable types reproducing origi¬
nals cut in brass, the brass prototypes being used for striking leaden matrices.x The
name Ahecedarium was given to it by Johannes Enschedé, because he regarded it as
rather a lesson in reading than a prayer-book. The first item in it is the alphabet,
followed by the Lord's Prayer, the Ave Morio, the Creed and the Ave Salus Mundi, with
some other short prayers, all in Latin.2 The sheet on which they are printed, a piece
of inferior sheepskin, was discovered by Johannes Enschedé in 1751 in the lining
of the spine of a fifteenth-century manuscript breviary. The book had belonged to
the Beresteyns, an old Haarlem family. A. J. Polack, an engraver of The Hague em-
ed for making a copper-engraving of the Ahecedarium for Meerman's Origines
typocjroplíicae,3 was commissioned by Enschedé to cut a facsimile of it. Although the

[ 1 ] Charles Enschedé was much influenced by the opinions
of his ancestor, Johannes I Enschedé, who was a passionate ad¬
vocate of his notion of 'chalcography' in opposition to the
champions of wooden type as the earliest technique of typo¬
graphy (His notes on the subject are preserved in the Museum
Enschedé, стѵ 578 d.). Large types were occasionally made
until fairly recent times from prototypes in brass and through
the medium of leaden matrices, as the following pages will
show. But steel punches had been in use so long before the
invention of typography, in making coins, seals and jewelry,
that there is little reason to doubt that they were used from
the first in making the smaller sizes of type. The vexed sub¬
ject is discussed at length and sane conclusions are reached
by Otto Hupp in Gutenberg und die Nacherfinder, Gutenberg-
Jahrbuch 1929, pp. 31—100. The peculiar notion of 'chalco¬
graphy' adopted by Johannes Enschedé and some other
writers of the eighteenth century seems largely due to a mis¬
understanding of the word chalcographus (a dealer in writing or
drawing produced by means of copper) used by sixteenth-
century Latin writers for a printer. The Greek word khalkos,
like acs, originally meant copper or bronze, but as other metals
came to be commonly worked it was used for them too. It
is clear that to writers of sixteenth-century Latin chalcographia
meant the same as typographia. In their works collected in
J. C. Wolf's Monumenta typographica, 1740, there are numerous
instances: Bergellanus of Mainz (Johann Arnold von Biirgel)
headed his poem in praise of printing, dated 1541, Encomion
chalcographiae (Wolf vol. 1, p. 13) ; Matthias Judex (or Richter), in
his essay De typographiae inveiitione of 1566 gives the various names
for printing as typographia, chalcographia, ars impressoria seu excusaría,

et per synecdoche)! praela (Wolf 1, p. 83). In his Thesaurus linguae graecae
of 1572 Henri Estienne explains Khalkographos in Latin to this
effect: 'One writing with copper (aeriis) types for letters, or
rather using them instead of writing. It is a word made up in
our time (like the synonym Typographos). The types, how¬
ever, are not made of copper (aereae)'. Thomas Cooper in his
Thesaurus of 1565 gives the English for cha Icographus as ' A prynter'.
By analogy, chalcoglyphus would mean a cutter (of punches)
of metal, not necessarily of copper or brass. Since Charles
Enschedé's book was published several other writers on ty¬
pographical history have relied on the word chalcographus as
an indication that a person to whom it was applied was a
typefounder : wrongly, I think. Froben, in putting the word
after his name in a colophon of 1516, would not be likely
to mean that the book was printed by a typefounder. The
specimen-book entitled Typorum et clmracterum ojficinae chalcogra-
phicae Georgii Leopoldi Fuhrinanni, Nuremberg 1616, is probably a
printer's specimen, since it includes a face Francofurti fusa as
well as one Noribergae fusa. Even the phrase in an epitaph com¬
posed in 1684 for Geofroy Tory (J. de la Caille, Histoire de l'im¬
primerie, 1689, p. 99) 'Garainunduin Calcographum Principan edocuerit'
may be understood in some such general sense as 'supreme
master of typography'. (H.C.)

artist achieved a remarkable likeness, my ancestor found that not one letter was a
perfect, copy. Reproductions are useful for giving an idea of their original, but it is
never safe to base an opinion of the original on them.

This alphabet-book was very dear to the heart of my ancestor. He attributed it
to Laurens Jansz. Coster, and set himself to prove that Coster should be hailed as
the inventor of typefounding. Most competent people were agreed that it was
printed from movable type, but many would not allow that the type was cast.
They maintained that the letters had been cut on separate little wooden blocks.
Johannes Enschedé found this opinion absurd, and he became so irate with its
defenders that he went so far as to refuse to print Meerman's great work because
the eminent author held to his view that the Ahecedarium had been printed from
wooden type.

This was how Johannes dealt with the question in his notes,* written in Dutch, scrutiny of

I have been a printer these fifty years and near forty-five a woodcut maker. I have made . ° ™

printing business and my own. I have been a typefounder a good thirty years. To do what these
learned gentlemen say that Laurens Coster and his successors did is beyond me; and I would
say the same of Papillon, the finest woodcut artist in France, perhaps still living, and of Albert
Dürer, Dirk de Bray, Izaak van der Vinne among the artists of former days. You can cut wood
letter the size of your thumb, the sort you use for 'Premises' and I have cut them in wood by
the hundred. To set a book in them would be ridiculous: with wood letter the size of a pin's
head it would be impossible. I have tried it out a little bigger. I made a strip of wood and drew
letters on it as big as a Great Primer, then I engraved them in relief, leaving room enough be¬
tween letters to be able to saw them apart. I did not lack good and very delicate instruments,
and all I had to do was to separate mathematically-reftangular letters from the wooden strip.
I used a very fine saw made from a piece of thin English steel spring of such workmanship that
I think the good Laurens can have had none half so good. I did my utmost to cut them off
square and parallel, but I could not. Not one letter would pass the test of a square. What could
I do? There is no rubbing them down or filing them. I did try; but even on the rubbing-stones
in our foundry it would not do. Trying it I only spoiled the letters. In short, I saw no hope of
succeeding; and I am sure that no maker of woodcuts is able to cut single letters in wood so
that they come mathematically true — and truth to the square is the whole secret of making
letters line up.

copied by Jacob Koning in a manuscript preserved in the pp. 83-98, in particular p. 88 note 1. Remarks to the same

passage quoted above on leaf 49). Another important source 30 January 1772, in the Museum Enschedé, CTV 317 g. (L. H.)]
for Johannes Enschedé's observations is a collection of copies