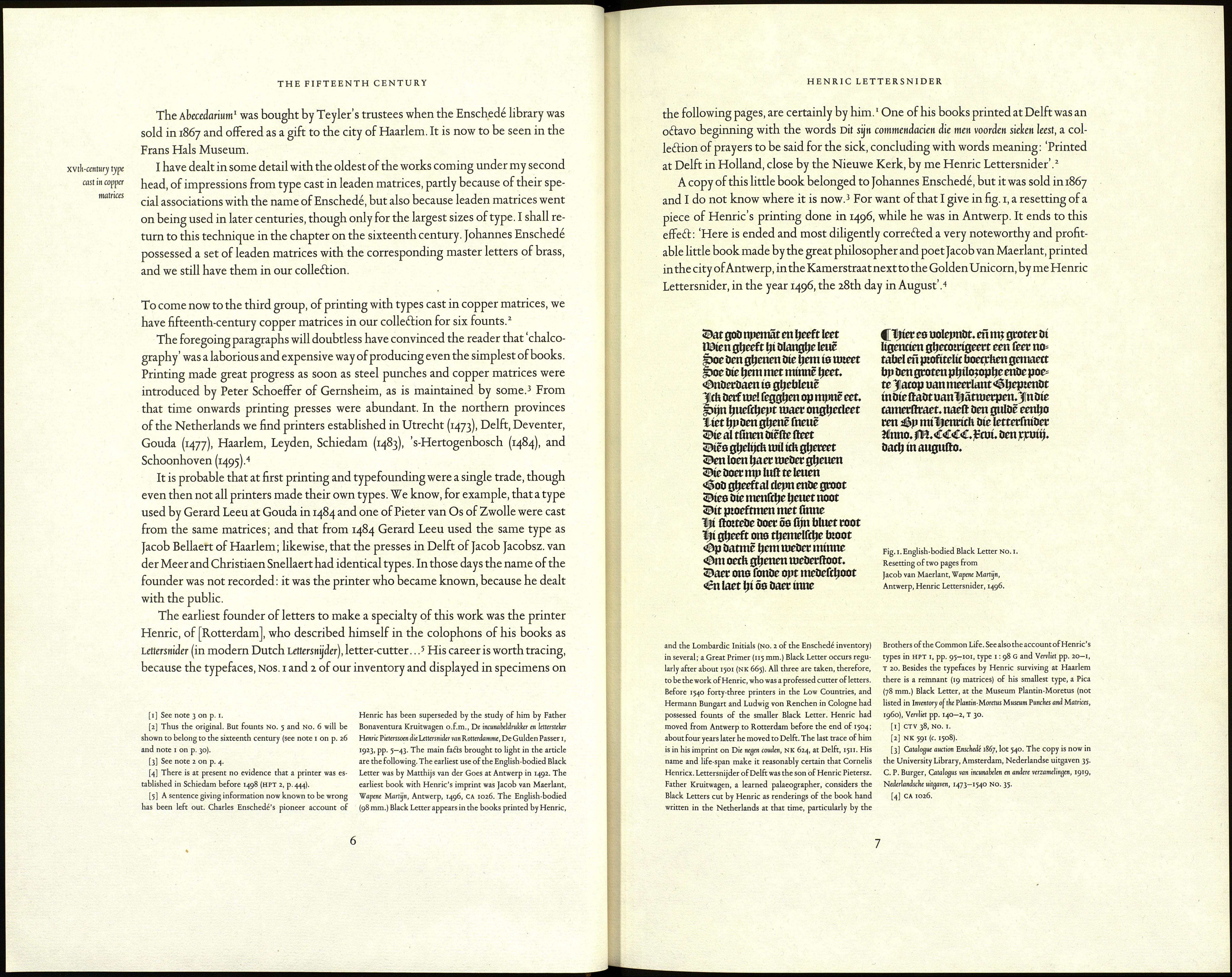 Johannes Enschedé did more than make this experiment. He put the problem
before his skilful punchcutter and matrix-maker, Fleischman, whose work I shall
describe in the chapter on the eighteenth century. He lent him the books and made
him examine every letter minutely. The expert wrote down his findings, for the
most part still in our archives,1 and I will summarise them.

There is no doubt that the letters were movable. So much can be deduced from
the irregular alignment, the variations in height-to-paper, the evident independence
of the letters one of another and the absence of traces of a cutting tool. To the eye
of a typefounder every letter is unmistakably mechanically-produced; and it was.
the defefts in manufacture that persuaded Fleischman that the letters were mova¬
ble types. Also, he was certain that the letters were not wooden. This conclusion
was not based simply on a belief that it was impossible to make them of wood: he
could see no sign of a knife in the contours of the letters. On the contrary, in all of
them he could see small blemishes that showed that they were cast. But how did the
first typefounder set about making his matrices? He must have had master letters,
cut either in wood or, as Enschedé maintained, in brass. It was known that steel
punches were a later invention by Peter Schoeffer of Gernsheim.2 Fleischman, there¬
fore, felt able to agree with his patron's view that the matrices for these letters had
been struck with master letters in brass. He thought this opinion was confirmed
by the round-shouldered appearance of the types and the absence of picks in the
hollows. Wood makes a poor impression in lead; and to give a sharp enough im¬
pression the wooden letter must be cut with steep shoulders, which these letters
seem not to have. On the other hand, the letters of the Ahecedarium, if closely scru¬
tinised, show signs of roughness in the counters or hollows, and Fleischman had re¬
peated doubts on that score. But because these letters seem to have round shoulders,
he felt warranted in judging finally that brass master letters must have been used
for this very early specimen of typography.

Matrices produced in this way were bound to be very faulty, sufficiently so to
account for irregularities in the type.

Variation in colour is due to the presence in the forme of type differing in height ;
want of alignment is caused by defecb in the moulds ; lack of uniformity in type
of a given sort is the result of unskilful casting. At that early time the mould was not
fitted with a stool, the means adopted in later typefounding of placing the matrix
in the right position in relation to the mould, so that it had to be done by eye, using
marks as a guide ; a rough method of securing alignment which fell short of accuracy.

[i] CTV 298 e. genious and skilful man, devised an easier way of founding

on p. 1) show that Johannes Enschedé drew this conclusion brought the art to the state in which it is now'. Johannes

from a passage in the Annales Hirsaugienses by Trithemius, Enschedé had seen this passage quoted in Prosper Marchand's

The technique of striking matrices, also, was at a primitive stage of development.
Even with modern equipment it is barely possible to make perfect, strikes in lead,
and it goes without saying that the matrices of those days could never have been
uniformly level in the face, nor truly rectangular, nor struck equally deep. The type-
metal, too, had to be extremely ductile ; it is supposed to have been tin or tin with
a small admixture of lead. To prevent the cast type from sticking to the matrix,
grease was probably put in its struck impression, a practice which deprived the
castings of sharp contours and accounts for appreciable variations in type for one
sort, some casts having penetrated more deeply than others into the matrix. Only
a man experienced in the trade and of exceptional ability could tell, given these
conditions, whether or no two types of a sort had come from one matrix.

The softness of the metal meant that the type was easily damaged by a knock or
a fall. When such an accident happened to a piece of type it was not battered but
bent, and bent letters were another cause of irregularities in the page. That is not
to say that there are no battered letters in our early pieces of printing: Fleischman
thought they were due to the type before it cooled having stuck to the matrix and
having been forcibly pulled away from it.

One more source of trouble was the lack of rigidity in the matrix. If the two halves
of the mould were pressed together too hard, the effect, was to make the letter nar¬
rower and taller. A slight knock on the head of the matrix was enough to range the
letter lower on the body of the type and make it lean to one side. If the surface of
the matrix were even slightly curved, the letter would go out of alignment and would
no longer have the right height or dimensions ; if the sides of the matrix bulged
even a little, the letter would be widened and made to lean backwards or forwards,
and this again would give an uneven appearance to the page.

After these general remarks Fleischman took the trouble to make a detailed ex¬
amination letter by letter of the second edition of the Spiegliel onser belioudenisse.г For
Johannes Enschedé the great ob j eel: was to prove that Coster had discovered the art
of typefounding. What Fleischman succeeded in putting beyond doubt once and
for all was that this book was one of the most primitive pieces of typographical
printing, so roughly done that the printer could not have learned from a prede¬
cessor in the art.*

[*] See Ch.Enschedé,Technischotiderzoeknaar deuitvinding valide in the possession of the previous owner, the widow of the

in note 1 on p. 2, and G. Zedier, Der holländische Frühdruck, of the same edition lent him by Gerard Meerman (Museum

report is preserved at the Museum Enschedé, CTV 298 e. The session of the City of Haarlem and therefore available to him

exemplaires de la seconde édition hollandaise ...' Apparently in the City Library (the Nicolaes Verwer-copy) and one in the

Charles Enschedé confused here Fleischman's report on the Town Hall. The notes on these copies of an edition which was

on it, the result of a careful comparison between this copy Meerman, and apparently also by Johannes Enschedé, are pre-