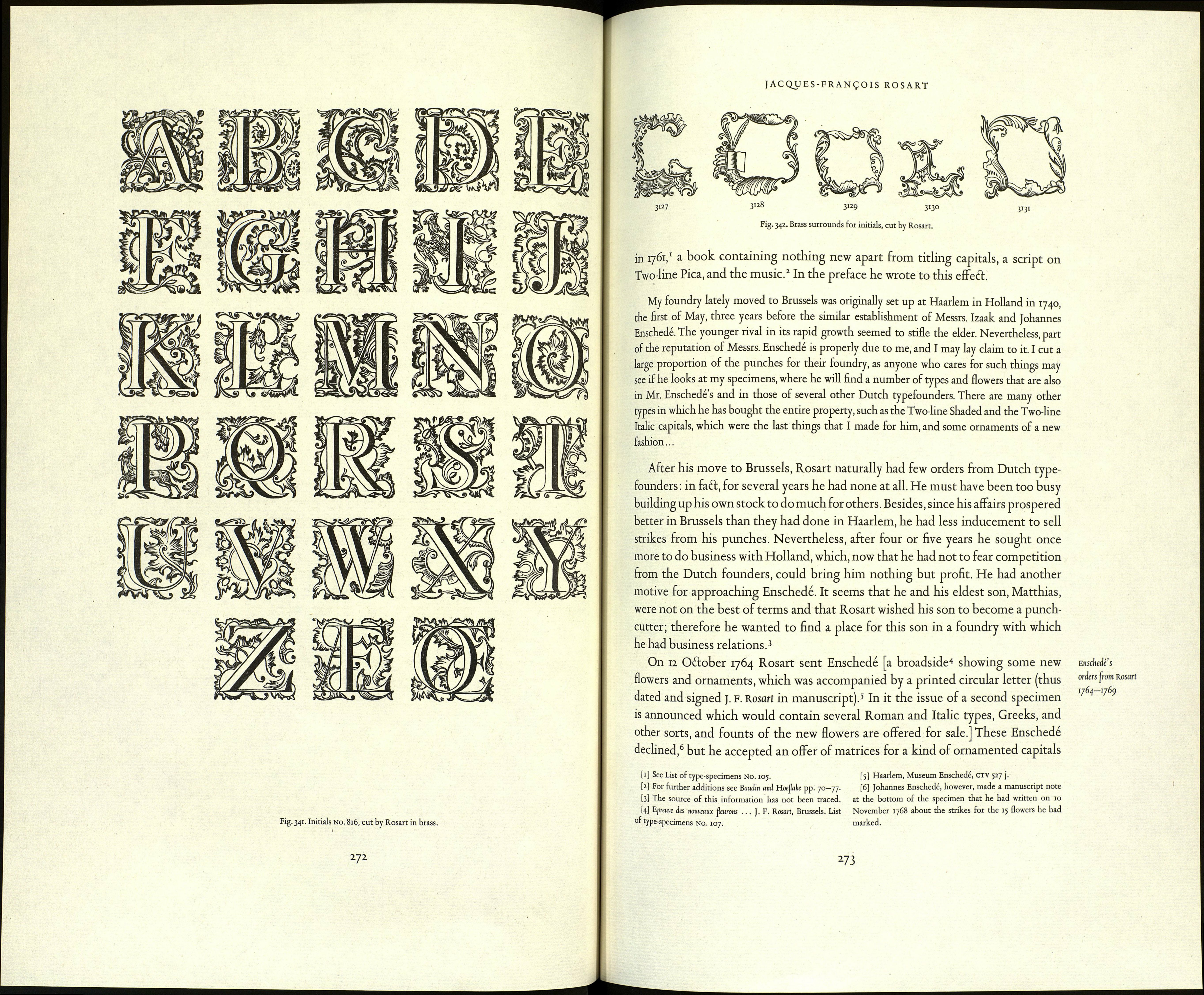 to be profitable, and as he did not succeed in finding enough customers for the
producís of his foundry he had pecuniary difficulties. He tried to escape from them
by going into partnership in 1755 with Cornelis Nozeman, a Remonstrant Calvinist

minister,1 who had some money but no knowledge of typefounding. The firm of
Corn. Nozeman & Comp, issued a specimen in its second year,2 showing besides
some of the types I have already mentioned a Great Primer Roman and Italic and
a Pica Italic.3 The association, however, proved to be no remedy. Nozeman was
called to pastoral duties in Rotterdam in 1759 and Rosart left for Brussels. His
partnership with Nozeman was dissolved and the contents of the foundry, or at
least the matrices, were put up to auction and sold on 11 November 1760.4 Enschedé
bought the Paragon Italic No. j8j mentioned on pp. 256—257, the twenty-eight very
fine ornamental initials No. 816 of our inventory cut in brass, and some brass surrounds
for initials (figs. 341,342, pp. 272,273).

In Brussels Rosart set up a typefoundry under the patronage of Charles Alex- Rosnnin Brussels
ander, Duke of Lorraine, the first ever to be established in that city. The government
of the Austrian Netherlands had [authorized Jean-Henri Maubert to set up a Royal
Printing Office. In one way or another Rosart's departure to Brussels may have had
something to do with that printing office.5]

Undoubtedly, the rising fortunes of the typefoundry of Izaak and Johannes
Enschedé had contributed to the misfortunes of Rosart's. Jacques-François Rosart
always felt aggrieved, and he lost no opportunity of telling the world that, though
he had been unable to compete successfully with it, the rival house owed its success
to him. He made this claim in the specimen-book that he published in Brussels

[1] See Banditi and HoeJlake p. 24. but the Italics belonging to the Pica and the Small Pica are

(1756). List of type-specimens No. 96. Besides this specimen- are in the manner commenced by Gando and are different

book there is also a broadside issued at about the same time in style from the Italics (see Boudin and Hoejlake p. 39, and

Nozeman & Сотр. the designation of the types is in Dutch, [5] See Boudin and Hoejlak p. 26.