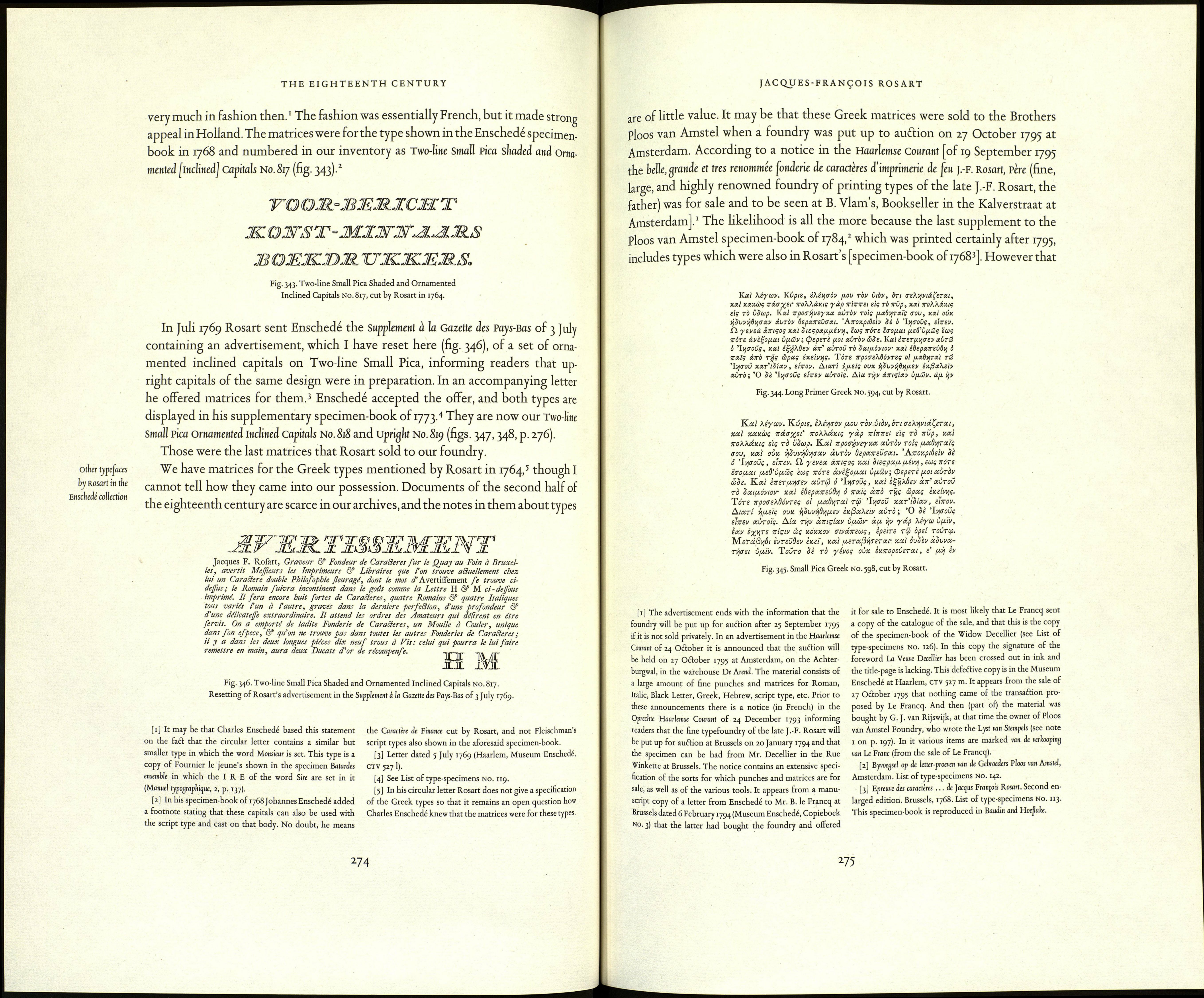 in 1761,1 a book containing nothing new apart from titling capitals, a script on
Two-line Pica, and the music.2 In the preface he wrote to this effect

My foundry lately moved to Brussels was originally set up at Haarlem in Holland in 1740,
the first of May, three years before the similar establishment of Messrs. Izaak and Johannes
Enschedé. The younger rival in its rapid growth seemed to stifle the elder. Nevertheless, part
of the reputation of Messrs. Enschedé is properly due to me, and I may lay claim to it. I cut a
large proportion of the punches for their foundry, as anyone who cares for such things may
see if he looks at my specimens, where he will find a number of types and flowers that are also
in Mr. Enschedé's and in those of several other Dutch typefounders. There are many other
types in which he has bought the entire property, such as the Two-line Shaded and the Two-line
Italic capitals, which were the last things that I made for him, and some ornaments of a new
fashion...

After his move to Brussels, Rosart naturally had few orders from Dutch type¬
founders: in faci:, for several years he had none at all. He must have been too busy
building up his own stock to do much for others. Besides, since his affairs prospered
better in Brussels than they had done in Haarlem, he had less inducement to sell
strikes from his punches. Nevertheless, after four or five years he sought once
more to do business with Holland, which, now that he had not to fear competition
from the Dutch founders, could bring him nothing but profit. He had another
motive for approaching Enschedé. It seems that he and his eldest son, Matthias,
were not on the best of terms and that Rosart wished his son to become a punch¬
cutter; therefore he wanted to find a place for this son in a foundry with which
he had business relations.3

On 12 Oftober 1764 Rosart sent Enschedé [a broadside4 showing some new
flowers and ornaments, which was accompanied by a printed circular letter (thus
dated and signed J. F. Rosart in manuscript).5 In it the issue of a second specimen
is announced which would contain several Roman and Italic types, Greeks, and
other sorts, and founts of the new flowers are offered for sale.] These Enschedé
declined,6 but he accepted an offer of matrices for a kind of ornamented capitals

[2] For further additions see Boudin and Hoefloke pp. 70-77. [6] Johannes Enschedé, however, made a manuscript note

[3] The source of this information has not been traced. at the bottom of the specimen that he had written on 10