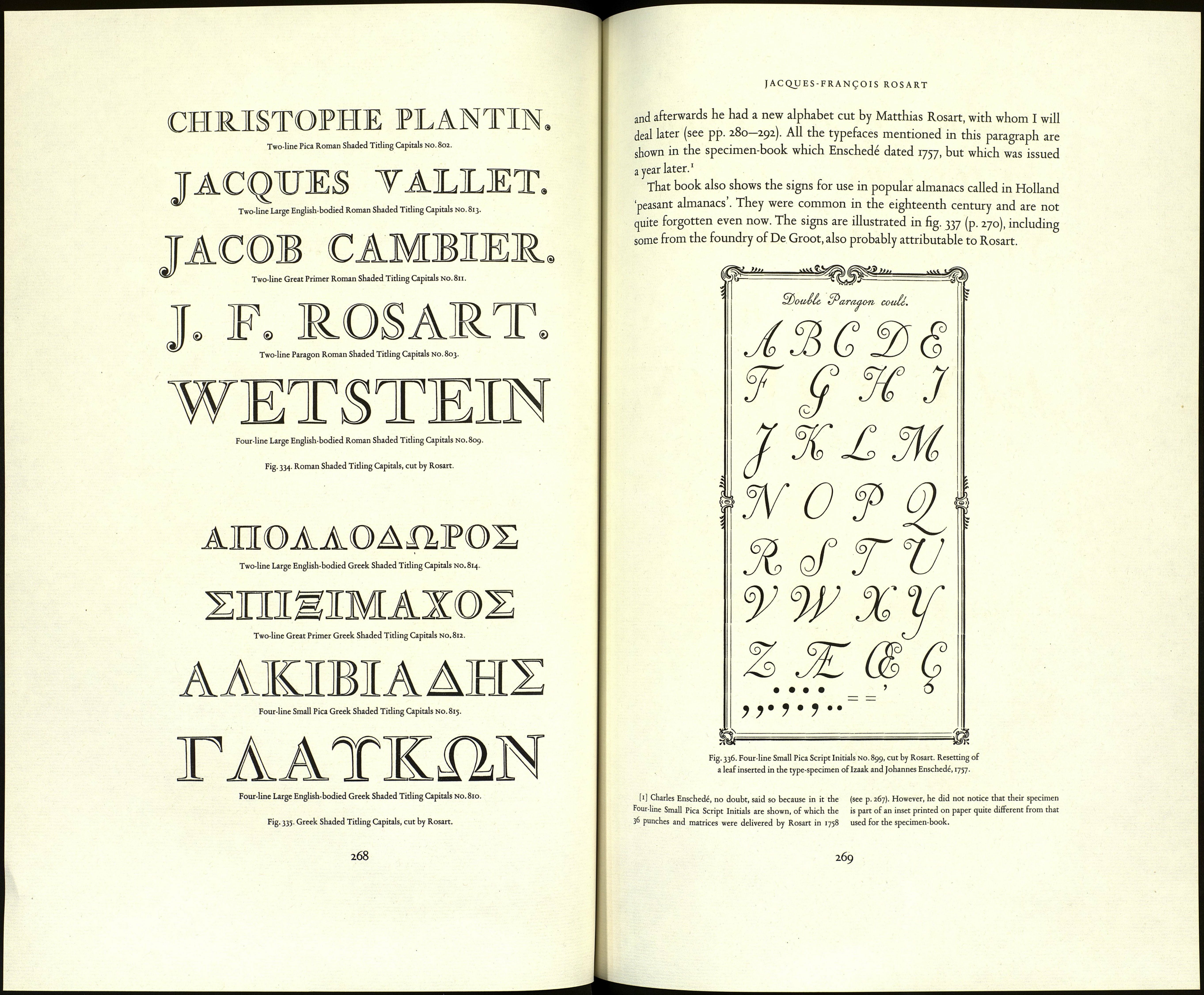 music invented by J.-F. Rosart and made in 1750, and this specimen was presented
to me'.1 Johannes Enschedé added the year 1753 [in which the type was made, no
doubt after he had received this little sheet]. Furthermore, in the preface to the
Hocrlewise zangenz the Enschedés write that Rosart's and Breitkopf's music-types
induced them to have their own cut, and expressed their opinion that Rosart's was
a beginning, still needing much improvement. But what was it? A happy chance
put me in the way of finding the answer. I found some of the punches (fig. 329,
for prints of the cast type) with which Rosart had made the matrices for the music-
type shown in his specimen. Examination of the punches dispelled the mystery:
Rosart printed his music at two workings: the first for the lines, the second for
the notes and signs (figs. 330—332). It was rightly called a beginning, and it was an
ingenious though unpractical one. The typefounding as well as the type-setting
was difficult. Rosart's achievement was a partial solution of the problem, but it
was interesting; and it may be that Breitkopf had heard of the stage reached by
Rosart when he set himself to find a better principle for making music-types. If,
then, we allow Breitkopf the honour of inventing the types, we must give Rosart
credit for being the first to direct, his efforts towards doing so.3

In 1758 Enschedé bought from Rosart the Four-line Small Pica Script Initials No. 899 of
our inventory (fig. 336, p. 269), of the design known in France as coulé [running hand],
for use with the Two-line Pico Script No. j^8. My ancestor never liked these initials,

[1] The three specimens are in the Museum Enschedé, CTV music. See for Rosart's later improvements of music type fit
481 a, 481 b, 527 d, see List of type-specimens No. 87. Another for a single impression, H. Carter's review of Bandin-Hocflalie,
specimen was noticed by H. E. Poole. It is inserted in the The Library 5th ser. 30, 1975, p. 138. The date of Rosart's
copy of Rosart's specimen of 1761 in the St. Bride's Printing letter quoted there should be read 6 November 1764. Cf. for
Library, London. See below H. E. Poole's article in note 3. other correspondance between Rosart and Enschedé at this
[2] See note 2 on p. 237. time p. 273. A detailed and critical examination was put for¬
te] R seems unlikely that Breitkopf knew about Rosart's ward by H. E. Poole, 'Jacques-François Rosart. A neglefted
trial. He does not refer to Rosart in his letter to Fournier pioneer of music printing'. Ъхгіу Music 5, 1977, pp. 352-363.
le jeune (see note 2 on p. 236). Moreover, if he had known [4] They are shown in the specimen-book of 1757 (see List
of Rosart's essay he would not have written as he did in that of type-specimens no. 100) under the heading Dubbelde Mediaan
letter as to his reasons for trying to find a new way of printing verbétercíe Capitulen no. i (Two-line Pica improved capitals No. 1).