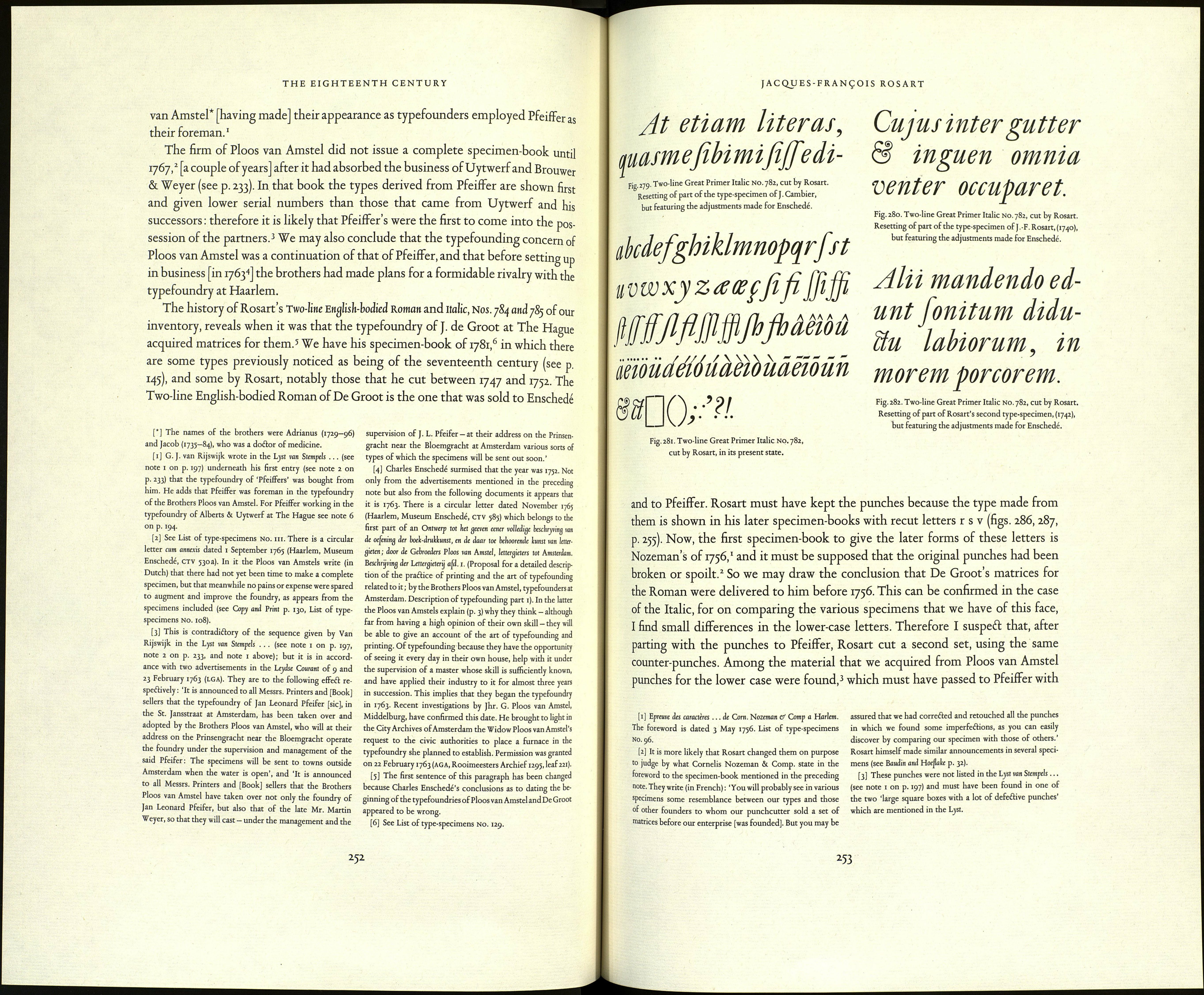 In the years 174(8]—1753 Rosart did not work for Enschedé ; but they were vital
years for his contribution to the typography of the Low Countries. He had gained
very much by his connection with our establishment. He had learnt higher stand¬
ards of workmanship and, even more important, had come to see that in a trade
dominated by the growing prestige of Fleischman he must change the whole
character of his work. The types that he advertised in his earlier specimens had a
mediocre reception from the printers ; but those that he made later, certainly with
guidance from Enschedé, were more appreciated. He made a bold decision: to get
rid of his stock in trade and completely re-equip himself with new matrices.

I have not been able to find out what became of Rosart's first stock of matrices.
All I know is that he parted with the punches and matrices for the Two-line Great
Primer Roman and Italic to Jacob Cambi er (see p. 254).

The nucleus for the new equipment of Rosart's foundry were the types that he
had cut under Enschedé's direction. He spent six years making new sets of punches
without publicizing any of them, and the new typefaces were copied so exactly
from Fleischman's that it is difficult to tell them apart.1 Meanwhile he must, for
lack of funds of his own, have had some financial support,2 and [it seems to be more
than likely that it came from Johann Leonard Pfeiffer.3] In 1752,4 when the new
types were nearly ready, Rosart issued a specimen-book of them in very small
format;5 and there appeared a specimen-book in the same format, showing the
same types and printed from [almost] the same typesetting, bearing the address
of the foundry of J. L. Pfeiffer in the St. Jansstraat at Amsterdam.6 The two are
identical except that Rosart's has an additional Nonpareil Roman. Pfeiffers type-
foundry is wholly obscure, and I can throw no light on it; but the Brothers Ploos

[ 1 ] Perhaps Charles Enschedé was not quite fair to these new
typefaces (see figs. 299—315 on pp. 260, 262, 263) in describing
them as copies of Fleischman's. Rosart had a less sure eye
than Fleischman for an evenly-proportioned alphabet and
for the optically-even slope of an Italic ; but he had more
natural grace, though he too had ugly mannerisms. With a
wider g and better-spaced m and v, and slight alterations to
some capitals the Pica Roman no. 790 (figs. 299-300. p. 260)
would be a very fine type indeed. (H. C.)

[2] He held the privilege in Holland and West Friesland
br the casting of the seals (Baudot and Hoejlalce p. 21). This was
at least one source from which money came in.

came from the Brothers Ploos van Amstel assuming that they
set up in business in 1753 or 1754; but that was about ten years
later (see notes 3 and 4 on p. 252). Dr. van Eeghen considers
it unlikely that Pfeiffer was in a position to lend money, in
view of his own modest circumstances.

[4] Charles Enschedé dated the specimen-book mentioned
in the following note 1752 because three of the types have
this year put against them.