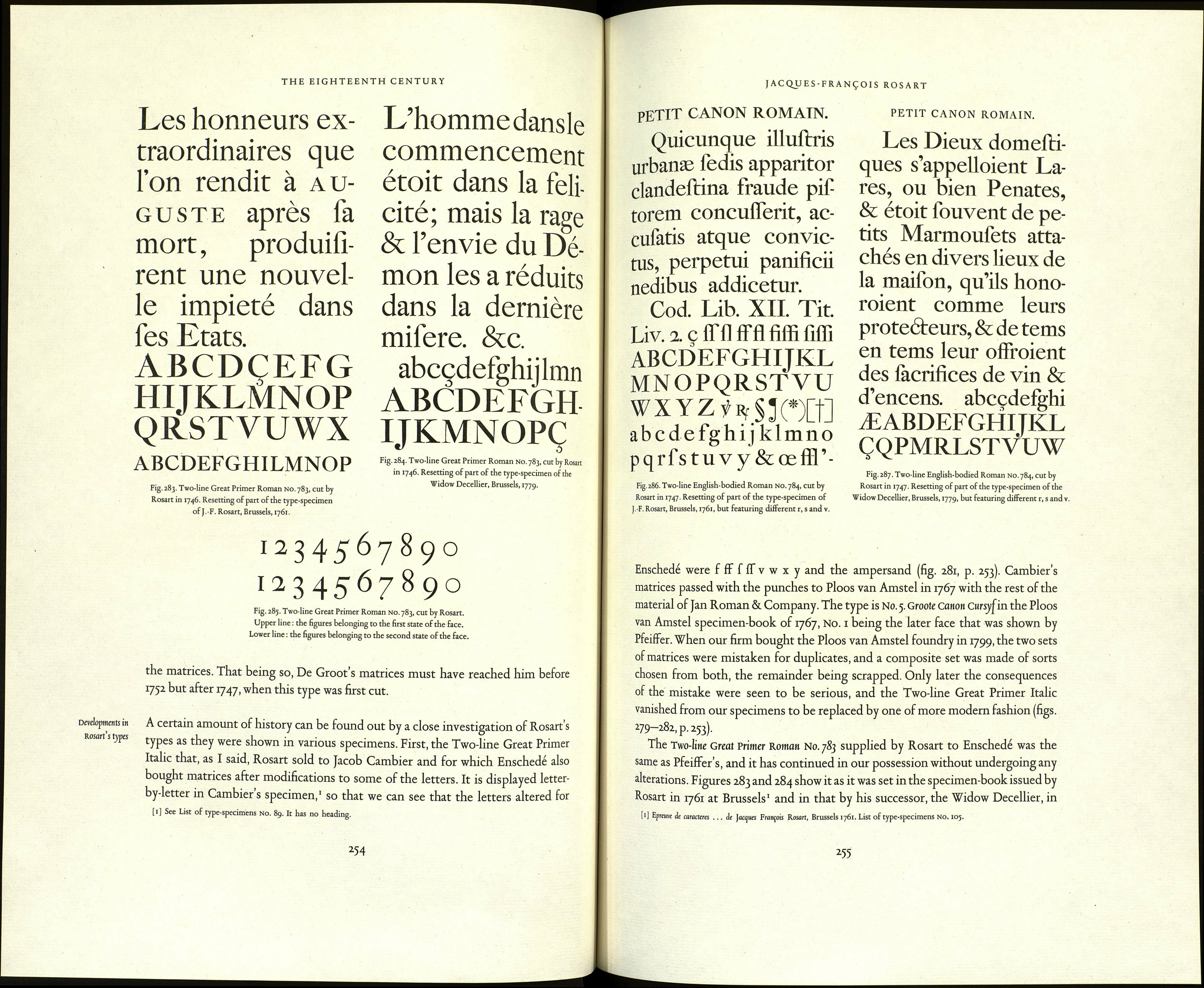 van Amstel* [having made] their appearance as typefounders employed Pfeiffer
their foreman.1

The firm of Ploos van Amstel did not issue a complete specimen-book until
1767,2 [a couple of years] after it had absorbed the business of Uytwerf and Brouwer
& Weyer (see p. 233). In that book the types derived from Pfeiffer are shown first
and given lower serial numbers than those that came from Uytwerf and his
successors : therefore it is likely that Pfeiffers were the first to come into the pos¬
session of the partners.3 We may also conclude that the typefounding concern of
Ploos van Amstel was a continuation of that of Pfeiffer, and that before setting up
in business [in 17634] the brothers had made plans for a formidable rivalry with the
typefoundry at Haarlem.

The history of Rosart's Two-line English-bodied Roman and Italic, Nos. 784 and j8$ of our
inventory, reveals when it was that the typefoundry of J. de Groot at The Hague
acquired matrices for them.5 We have his specimen-book of 1781,6 in which there
are some types previously noticed as being of the seventeenth century (see p.
145), and some by Rosart, notably those that he cut between 1747 and 1752. The
Two-line English-bodied Roman of De Groot is the one that was sold to Enschedé

[1] G. J. van Rijswijk wrote in the Lyst van Stempels ... (see
note 1 on p. 197) underneath his first entry (see note 2 on
p. 233) that the typefoundry of 'Pfeiffers' was bought from
him. He adds that Pfeiffer was foreman in the typefoundry
of the Brothers Ploos van Amstel. For Pfeiffer working in the
typefoundry of Alberts & Uytwerf at The Hague see note 6
on p. 194.

supervision of J. L. Pfeifer-at their address on the Prinsen¬
gracht near the Bloemgracht at Amsterdam various sorts of
types of which the specimens will be sent out soon.'

[4] Charles Enschedé surmised that the year was 1752. Not
only from the advertisements mentioned in the preceding
note but also from the following documents it appears that
it is 1763. There is a circular letter dated November 1765
(Haarlem, Museum Enschedé, CTV 585) which belongs to the
first part of an Ontwerp tot het geeven eener volledigc bescliryving van
de oe|ening der boefe-druldkunst, en de daar toe behooretide dunst van letter-
gieten ; door de Gcbroeders Ploos van Amstel, lettergieters tot Amsterdam.
Beschrijving der Lettergieterij afd. 1. (Proposal for a detailed descrip¬
tion of the practice of printing and the art of typefounding
related to it ; by the Brothers Ploos van Amstel, typefounders at
Amsterdam. Description of typefounding part 1). In the latter
the Ploos van Amstels explain (p. 3) why they think - although
far from having a high opinion of their own skill - they will
be able to give an account of the art of typefounding and
printing. Of typefounding because they have the opportunity
of seeing it every day in their own house, help with it under
the supervision of a master whose skill is sufficiently known,
and have applied their industry to it for almost three years
in succession. This implies that they began the typefoundry
in 1763. Recent investigations by Jhr. G. Ploos van Amstel,
Middelburg, have confirmed this date. He brought to light in
the City Archives of Amsterdam the Widow Ploos van Amstel's
request to the civic authorities to place a furnace in the
typefoundry she planned to establish. Permission was granted
on 22 February 1763 (aga, Rooimeesters Archief 1295, leaf 221).

[5] The first sentence of this paragraph has been changed
because Charles Enschedé's conclusions as to dating the be¬
ginning of the typefoundries of Ploos van Amstel and De Groot
appeared to be wrong.

Resetting of part of the type-specimen of J. Cambier,

and to Pfeiffer. Rosart must have kept the punches because the type made from
them is shown in his later specimen-books with reçut letters r s v (figs. 286, 287,
p. 255). Now, the first specimen-book to give the later forms of these letters is
Nozeman's of 1756,1 and it must be supposed that the original punches had been
broken or spoilt.2 So we may draw the conclusion that De Groot's matrices for
the Roman were delivered to him before 1756. This can be confirmed in the case
of the Italic, for on comparing the various specimens that we have of this face,
I find small differences in the lower-case letters. Therefore I suspect, that, after
parting with the punches to Pfeiffer, Rosart cut a second set, using the same
counter-punches. Among the material that we acquired from Ploos van Amstel
punches for the lower case were found,3 which must have passed to Pfeiffer with

[2] It is more likely that Rosart changed them on purpose
to judge by what Cornelis Nozeman & Comp, state in the
foreword to the specimen-book mentioned in the preceding
note. They write (in French) : 'You will probably see in various
specimens some resemblance between our types and those
or other founders to whom our punchcutter sold a set of
matrices before our enterprise [was founded]. But you may be

assured that we had corrected and retouched all the punches
in which we found some imperfections, as you can easily
discover by comparing our specimen with those of others.'
Rosart himself made similar announcements in several speci¬
mens (see Boudin and Hoeflale p. 32).

[3] These punches were not listed in the Lyst van Stempels...
(see note 1 on p. 197) and must have been found in one of
the two 'large square boxes with a lot of defective punches'
which are mentioned in the Lyst.