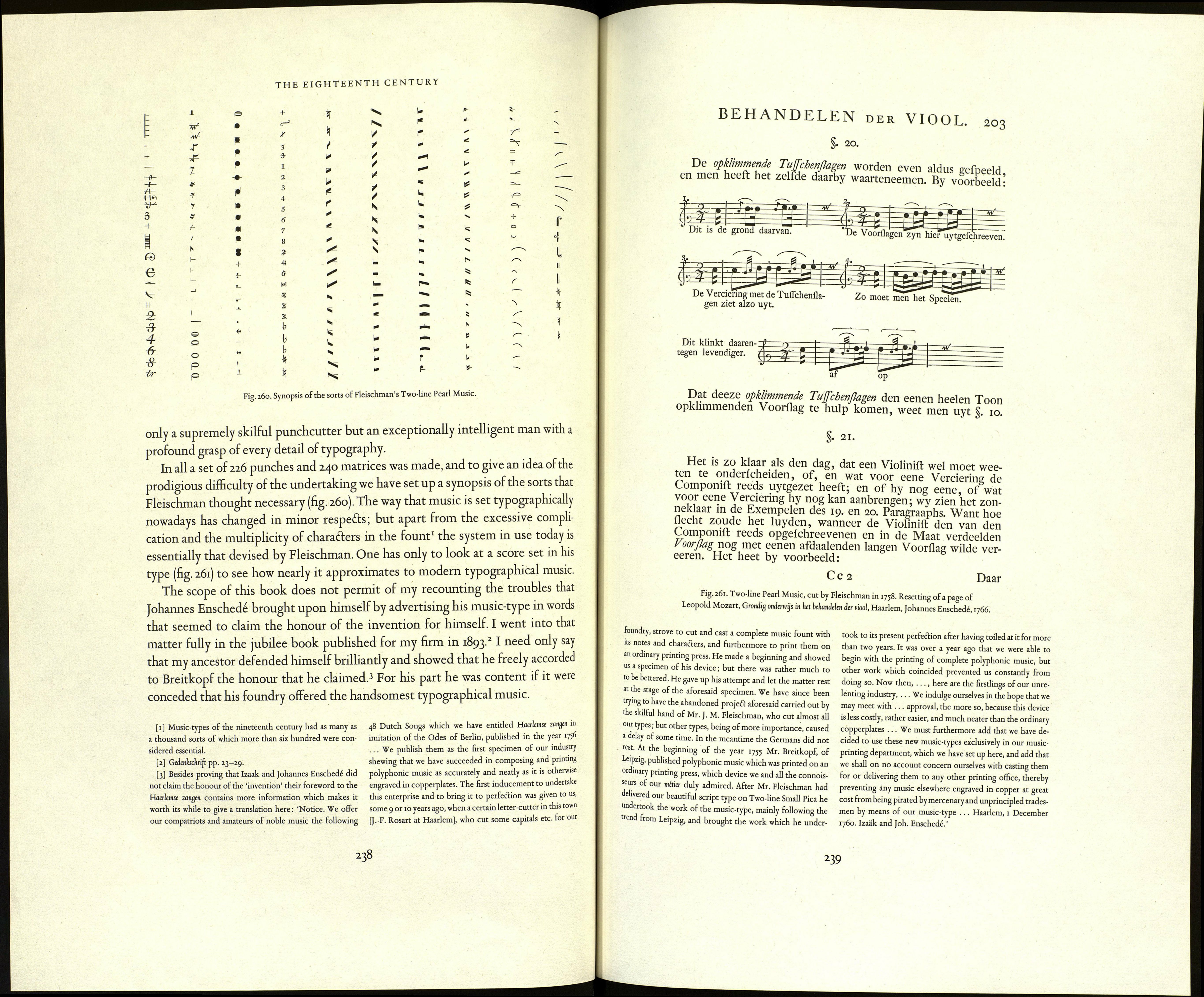 highly enough to entrust him with the cutting of his types, must have had the
casting and printing done elsewhere. This I consider unlikely ; and I prefer to think
that Armenian was printed here after 1717. Certainly there was a flourishing Arme¬
nian community in Amsterdam later than that. Moreover, Carrière himself wrote
[in French]: 'Father Karikin, of Venice, the greatest living authority on Armenian
bibliography, sent me this note: "About 1830 or 1835 (?) an Armenian from Russia
bought some Armenian types in Amsterdam which had been sequestrated by
Napoleon and with them he proposed to set up a press in Tiflis".' In the main this
must be correct.: only the dates are wrong; for the preface to our specimen-book
of 1825 expresses regret that Fleischman's Armenian types could not be shown
because they had been taken to Russia some time before then.1

Fleischman was true to his bargain: he kept no matrices or strikes for himself.
However, for the purpose of justifying the matrices he had to cast trial types, and
those he kept. When he died, Enschedé put these trial letters in his specimen-book
of 1768 with the idea of paying homage to the deceased artist, these being the only
relics of one of his notable archievements. After that the types lay in a corner of
our foundry until the advent of electrotyping allowed us to use them for making
new matrices, destroying the originals in the process. The contraer with Di Paulo
specifies nine types : we have only four, two for an upright script and two for in¬
clined; but these are enough to show the skill with which Fleischman performed
the task. These types are now as numbered in our inventory Great Primer Armenian
upright No. 66} and Inclined No. 88 (figs. 256 and 258), and English-bodied Armenian Upright
No. 664 and inclined No. 89 (figs. 257 and 259).

In the years following, 1758 and 1759, Fleischman addressed himself to an even
harder problem. The German printer and typefounder, Johann Gottlob Immanuel
Breitkopf, had been for some time past devoting himself to the improvement of
type-set music.2 The necessary punches were cut to his specification by Johann
Schmidt, son of Johann Michael Schmidt (see pp. 133—134). Breitkopf, however,
would not tell the punchcutter what he intended to do with the punches because he
was afraid that if Schmidt left him for another master, he would divulge his secret.
A first and a second attempt failed; but a third gave the desired result, and [in 1755]
Breitkopf published his invention in the form of a sonnet set to music by Grafen,
Secretary to the Duchy of Brunswick. Soon afterwards he printed a considerable
work, il trionfo della fedeltà [by the Princess-Eleftress of Saxony],3 and, in 1756, a Receuil

[1] The reasoning in this paragraph is not quite conclusive. vention' (see L. Volkmann, J. G. I. Breitbpf und P. S. Fournier le
There is a possibility that the types to which Karikin referred jeune. Ein Beitrag гиг Geschichte des Notendrucks und der Schrijtgiesscrei
are not those cut by Fleischman for Di Paulo; for instance, int iS. Jahrhundert, Gutenberg-Jahrbuch 1928, pp. 118-141, es-
because Nicholas Kis cut (Armenian?) types for Matteo pecially pp. 127-129. The essential part of this letter is trans¬
Joannes, an Armenian and printer at Amsterdam (see p. 132). lated into English by H. E. Poole in his article New music rypes:

[2] In a letter to Fournier le jeune, dated 12 September 1761, Invention in the eighteenth century : 1. Journal of the Printing His-

in view of my invention of music-type as the brothers [sic!] [3] So far Charles Enschedé derived his information from

Enschedé ... so skilfully copied the inventions of another the letter mentioned in the preceding note,
and are even trying to rob him of the honour of the in-

d'airs à danser. The preface to the last projected a series of musical works to be
published from his office ... '

Breitkopf had a great success with his new types. The public liked his editions,
and within the year 1756 he was able to bring out the first of his proposed books,
Berlinisclie öden und Lieder, which added very much to the reputation of his printing and
typefounding. Enschedé was not content to be left behind: and, taking Breitkopf's
work as a model, he asked Fleischman to make him the necessary music-type for
printing a collection of the songs of Haarlem answering to the Berlin odes.2

The labour involved was enormous. It is true that there was a model for imi¬
tation; but it was very difficult to learn from it the best way of making the types.3
For two whole years Fleischman worked at this task, cutting the musical notation
which is even now the admiration of experts in the trade.

The purity of the line and complete evenness of the composition and the stridì:
adherence to the plan he had worked out initially show that Fleischman was not

[1] The text of this preface, which Charles Enschedé cited
in full has been omitted (H. C).

Agricola.....and rhythmically translated into Dutch by

J-J.D[usterhoop]. At Haarlem, printed in the Music Printing

Office of Izaak and Johannes Enschedé. 1761).

[3] Fournier le jeune quoted a letter to him from Messrs.
Enschedé in which they wrote on и November 1757 (in
French): 'We have seen the music of Mr. Breitkopf's in¬
vention. We consider that system workable but extremely
laborious and very costly. We beg you to send us a specimen
of your music printing' (Manuel typographique 1, p. 52).