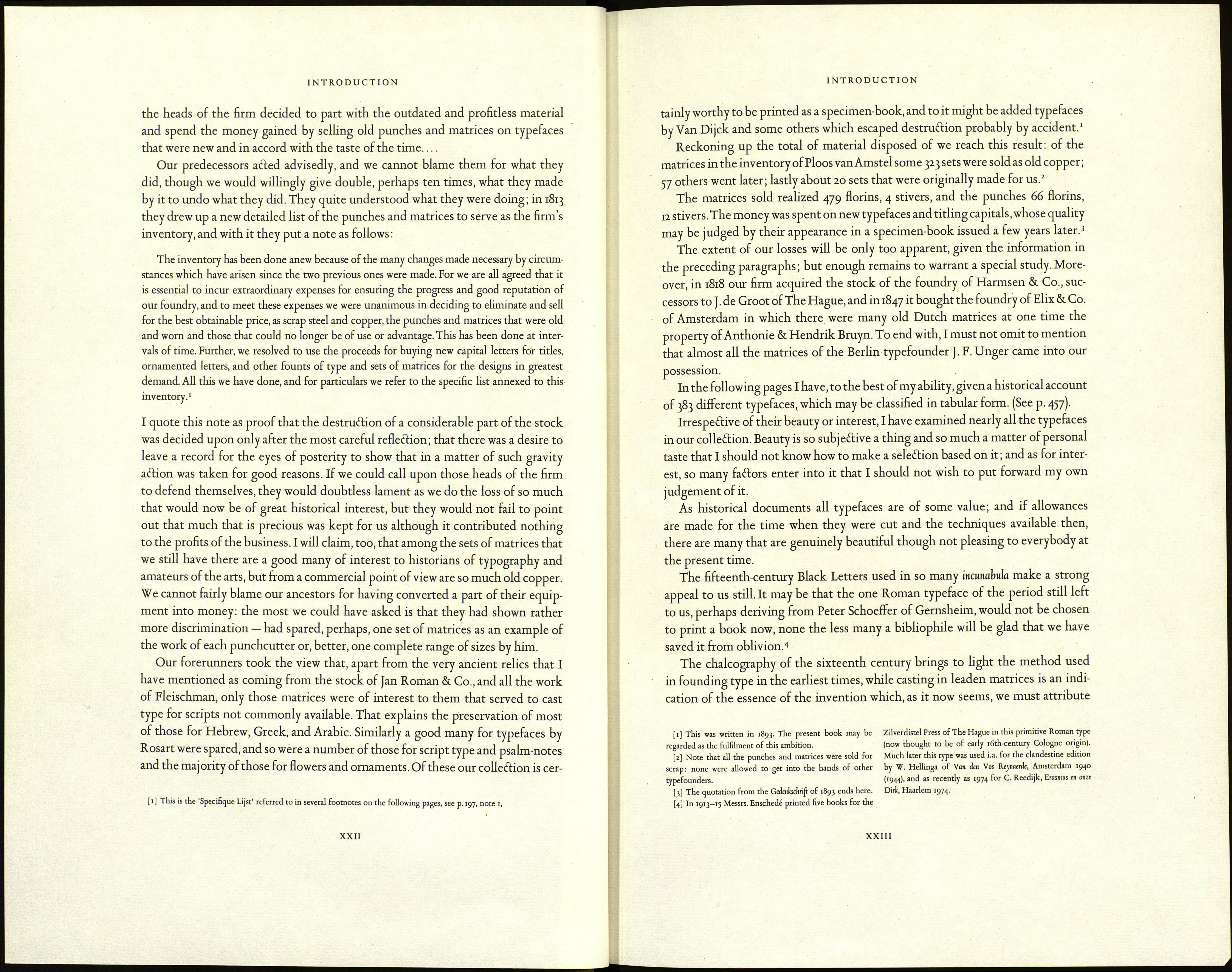 as Henry Hope1 and the Marquis de Saint-Simon2 consulted him and insisted on
entrusting their books to him to print; books were often sent to him as a mark
of respect., in one instance by a person in British India ; and we have in our archives
a letter of thanks written by no less a person than Frederick the Great.3 Moreover,
our visitors' book, going back to 1757, is proof that the Enschedé establishment
was regarded at that time as a place that visitors to this country ought to see.

To conclude this portrait I will note that, like Izaak before him, Johannes was
several times elected deacon of the printers' guild of Haarlem and served as Regent
of the Hospitals of St. Elisabeth and St. Barbara. He was a member of the scientific
section of the Teyler Institute.4

So, when, on 1 May 1761, Izaak, and after him on 21 November 1780, Johannes
departed this life, they did so with the satisfaction of knowing that their days were
well spent and in the confident expectation that their work would continue to
bear good fruit.

We, who come two centuries after them and see the growth of what they planted,
hold their memory in the highest honour and respeft.

I have said that the library begun by Johannes Enschedé was sold.5 It is de¬
plorable that circumstances made the sale necessary; but we may congratulate
ourselves inasmuch as a good many books of typographical interest were kept,
among them most of the specimens of type. These specimens, for the most part,
came to Johannes Enschedé with the stocks of the typefoundries which he bought
in the course of the eighteenth century jointly with the Brothers Ploos van Amstel
of Amsterdam. In 1743 Izaak and Johannes Enschedé succeeded to the foundry
of Wetstein; in 1760 they added to the range of their matrices by purchases at the
sale of Nozeman & Co., who had taken over the material of the typefounder and
punchcutter Jacques-François Rosart, formerly in business at Haarlem. In 1767
Johannes Enschedé bought the typefoundry of Jan Roman & Co. of Amsterdam
deriving from Christoffel van Dijck and Daniel Elsevier. That was an acquisition
of much interest to him because it included matrices made in the fifteenth and
sixteenth centuries. In 1769 he became possessed of the Hebrew types from the
foundry of Willem Cupy ; in 1780 he added some things from the sale of the famous
business of Voskens & Clerk; but in this instance the high prices reached at

near Haarlem, from which he wrote a letter to Johannes societies in Haarlem in 1756 ; the first for the study of theo-

Enschedé on 14 Oft. 1770, preserved in the Museum Enschedé logy, the second for the natural sciences, history, literature,

(CTV 317 I). and the arts. The Teyler Institute is still flourishing.

He resigned his commission in the French army in 1749 and books were bought by dealers from Paris and London, but

retired to a country house in Holland, where he devoted some went to the University of Ley den and the Royal Library

himself to gardening and literary pursuits. Johannes Enschedé at The Hague, Cambridge University Library and the British

printed his Abus des idées spéculatives (undated) and his translation Museum. Cf. W. Hellinga, 'The Enschedé sale was most

auction prevented our house from making large purchases. On the other hand, a
good bargain was the entire stock of the Brothers Ploos van Amstel secured in
1799. That concern, established about the middle of the eighteenth century, by
J. L. Pfeiffer, had in course of time absorbed the business of Brouwer & Weijer, suc¬
cessors to Hermanus Uytwerf, and of Izaak & Hendrik van der Putte, Jan Roman
& Co., and Willem Cupy. The purchase of Ploos van Amstel brought in a rich
collection of typefaces of historical interest but was a disappointment so far as
commercial advantage was concerned.

Johannes Enschedé II, grandson of Izaak, born on 15 November 1750, died on
29 July 1799, and the control of the business passed to his widow, Johanna Elisabeth,
née Swaving. She was assisted by her brother-in-law, Abraham Enschedé, born on
20 March 1760.

The tendencies of the time were not favourable to the development of the art
of typefounding. There was a change of taste in the direction of a French fashion
in type, so that Dutch typefaces were much less in demand. In 1806 our firm issued
a new specimen-book, but apart from the work of Fleischman and Rosart, there is
nothing of interest in it.

Two years after that, unavoidable investment in new matrices from France in¬
curred heavy expenditure, and the heads of the firm decided to sell for scrap metal
all the founts of type with the matrices and punches that they judged would never
again have any commercial value.

In the book issued in 1893 ^or tne celebration of the hundred-and-fiftieth anni¬
versary of our typefoundry11 dwelt particularly on this event, because the regard
and fondness that we have for anything that we inherit from previous centuries
might easily incline us to be too severe on the people responsible for this sad
loss while forgetting that they left us a great many precious things...

It must be remembered that at the beginning of the nineteenth century little
value was put on the possession of old matrices, that the French Revolution had
radically affecfed the prevailing fashions, and that the business of Joh. Enschedé
en Zonen was to manufacture printing type, and there was no question then of
starting a museum or a historical collection. Moreover the proprietors had finan¬
cial problems to overcome, so much of its capital having been spent on acquiring
the stocks of other foundries. At all events, the sum realized by the sale of these
old punches and matrices, small as it may seem to us, enabled the firm to satisfy
its customers by supplying them with up-to-date material, and the successful con-
duel: of a typefoundry at that time of financial stringency required a riddance of
commercially valueless stock. Therefore we can easily understand why it was that

[1] De Lettergieterij van Joh. Enschedé en Zonen: Gedenkschrift ter ge- ation from it where he repeats himself in his sorrow for the

legenheid van haar honderdvijftig-j'arig bestaan op 9 Maart 1893, written loss of the old matrices and his desire to justify what his

anonymously by Charles Enschedé and printed in 1893 for predecessors did (H.C).
presentation to friends of the firm. I have abridged his quot-