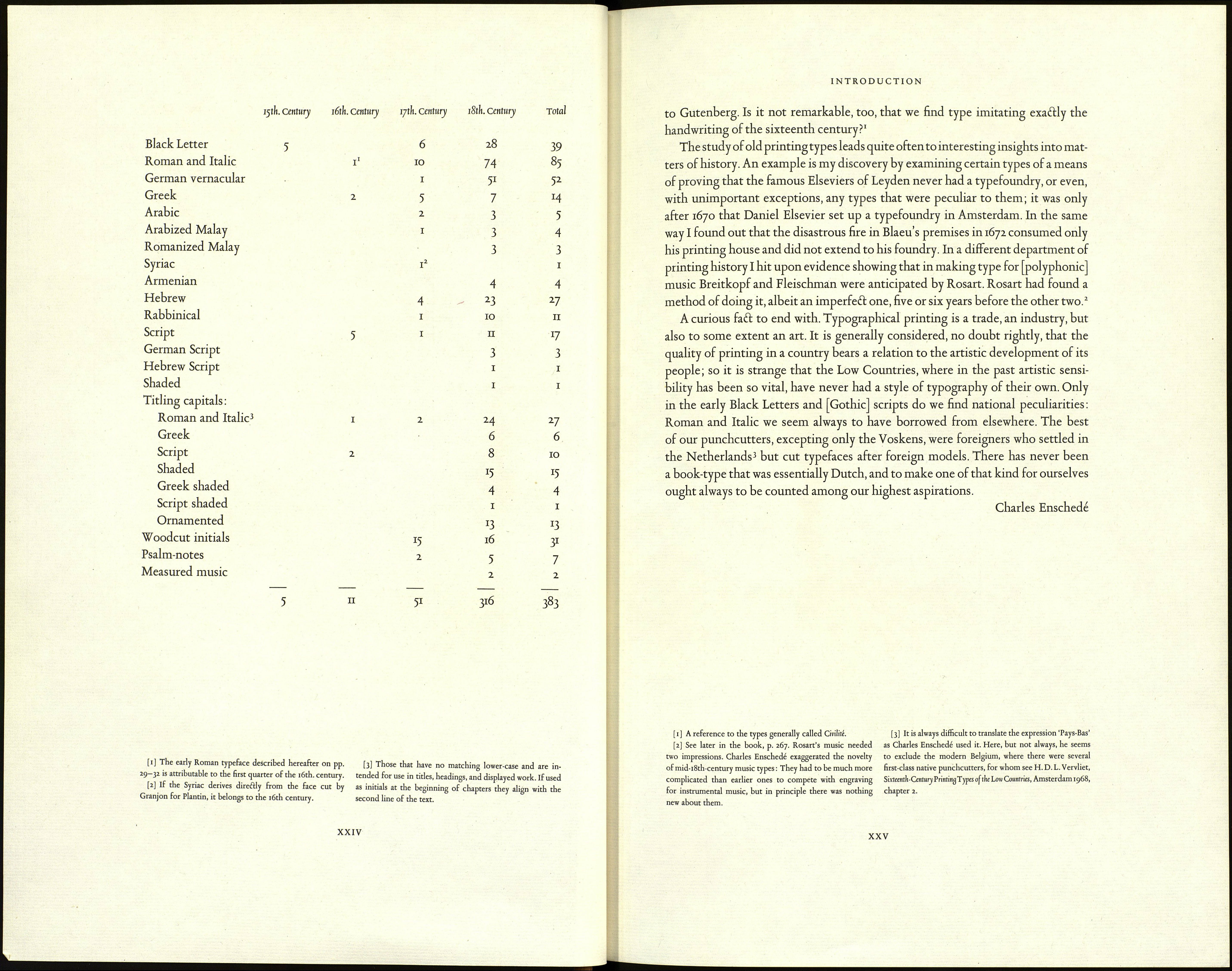 the heads of the firm decided to part with the outdated and profitless material
and spend the money gained by selling old punches and matrices on typefaces
that were new and in accord with the taste of the time....

Our predecessors afted advisedly, and we cannot blame them for what they
did, though we would willingly give double, perhaps ten times, what they made
by it to undo what they did. They quite understood what they were doing; in 1813
they drew up a new detailed list of the punches and matrices to serve as the firm's
inventory, and with it they put a note as follows :

The inventory has been done anew because of the many changes made necessary by circum¬
stances which have arisen since the two previous ones were made. For we are all agreed that it
is essential to incur extraordinary expenses for ensuring the progress and good reputation of
our foundry, and to meet these expenses we were unanimous in deciding to eliminate and sell
for the best obtainable price, as scrap steel and copper, the punches and matrices that were old
and worn and those that could no longer be of use or advantage. This has been done at inter¬
vals of time. Further, we resolved to use the proceeds for buying new capital letters for titles,
ornamented letters, and other founts of type and sets of matrices for the designs in greatest
demand. All this we have done, and for particulars we refer to the specific list annexed to this
inventory.1

I quote this note as proof that the destruction of a considerable part of the stock
was decided upon only after the most careful reflection ; that there was a desire to
leave a record for the eyes of posterity to show that in a matter of such gravity
action was taken for good reasons. If we could call upon those heads of the firm
to defend themselves, they would doubtless lament as we do the loss of so much
that would now be of great historical interest, but they would not fail to point
out that much that is precious was kept for us although it contributed nothing
to the profits of the business. I will claim, too, that among the sets of matrices that
we still have there are a good many of interest to historians of typography and
amateurs of the arts, but from a commercial point of view are so much old copper.
We cannot fairly blame our ancestors for having converted a part of their equip¬
ment into money: the most we could have asked is that they had shown rather
more discrimination — had spared, perhaps, one set of matrices as an example of
the work of each punchcutter or, better, one complete range of sizes by him.

Our forerunners took the view that, apart from the very ancient relics that I
have mentioned as coming from the stock of Jan Roman & Co., and all the work
of Fleischman, only those matrices were of interest to them that served to cast
type for scripts not commonly available. That explains the preservation of most
of those for Hebrew, Greek, and Arabic. Similarly a good many for typefaces by
Rosart were spared, and so were a number of those for script type and psalm-notes
and the majority of those for flowers and ornaments. Of these our collection is cer¬
ti] This is the 'Spécifique Lijst' referred to in several footnotes on the following pages, see p. 197, note 1,

tainly worthy to be printed as a specimen-book, and to it might be added typefaces
by Van Dijck and some others which escaped destruction probably by accident.1

Reckoning up the total of material disposed of we reach this result: of the
matrices in the inventory of Ploos van Amstel some 323 sets were sold as old copper;
57 others went later; lastly about 20 sets that were originally made for us.2

The matrices sold realized 479 florins, 4 stivers, and the punches 66 florins,
12 stivers.The money was spent on new typefaces and titling capitals, whose quality
may be judged by their appearance in a specimen-book issued a few years later.3

The extent of our losses will be only too apparent, given the information in
the preceding paragraphs ; but enough remains to warrant a special study. More¬
over, in 1818 our firm acquired the stock of the foundry of Harmsen & Co., suc¬
cessors to J. de Groot of The Hague, and in 1847 it bought the foundry of Elix & Co.
of Amsterdam in which there were many old Dutch matrices at one time the
property of Anthonie & Hendrik Bruyn. To end with, I must not omit to mention
that almost all the matrices of the Berlin typefounder J. F. Unger came into our
possession.

In the following pages I have, to the best of my ability, given a historical account
of 383 different typefaces, which may be classified in tabular form. (See p. 457).

Irrespective of their beauty or interest, I have examined nearly all the typefaces
in our collection. Beauty is so subjective a thing and so much a matter of personal
taste that I should not know how to make a selection based on it; and as for inter¬
est, so many faftors enter into it that I should not wish to put forward my own
judgement of it.

As historical documents all typefaces are of some value; and if allowances
are made for the time when they were cut and the techniques available then,
there are many that are genuinely beautiful though not pleasing to everybody at
the present time.

The fifteenth-century Black Letters used in so many incnnabula make a strong
appeal to us still. It may be that the one Roman typeface of the period still left
to us, perhaps deriving from Peter Schoeffer of Gernsheim, would not be chosen
to print a book now, none the less many a bibliophile will be glad that we have
saved it from oblivion.4

The chalcography of the sixteenth century brings to light the method used
in founding type in the earliest times, while casting in leaden matrices is an indi¬
cation of the essence of the invention which, as it now seems, we must attribute

[1] This was written in 1893. The present book may be Zilverdistel Press of The Hague in this primitive Roman type

regarded as the fulfilment of this ambition. (now thought to be of early 16th-century Cologne origin).

[2] Note that all the punches and matrices were sold for Much later this type was used i.a. for the clandestine edition

scrap: none were allowed to get into the hands of other by W. Hellinga of Van den Vos Reynaerde, Amsterdam 1940