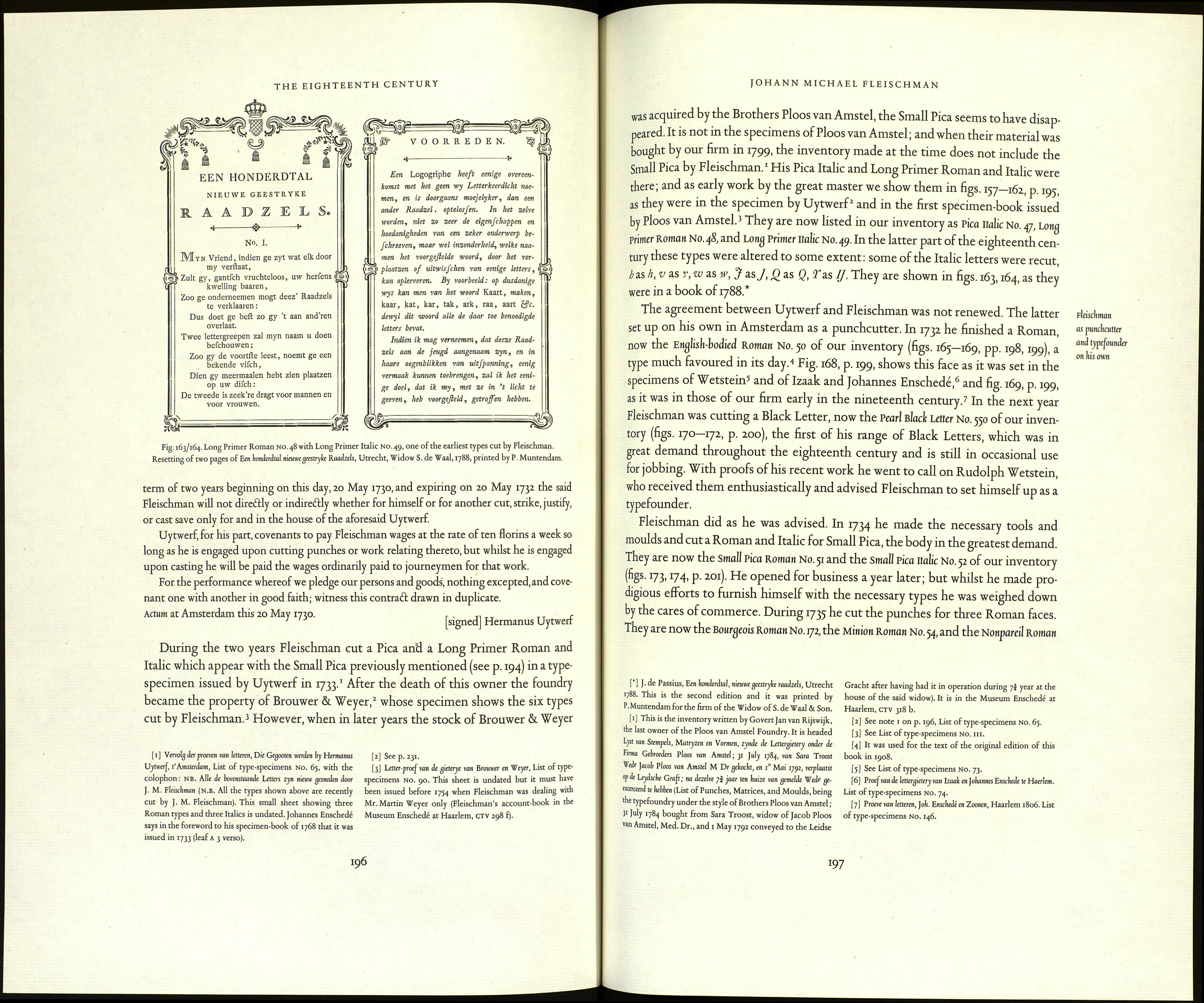 (J¿ Alberts and Uytwerf, being the sole proprietors of the typefoundry since
18 September 1728, advertised in the 's Gravenhaegse Courant of 18 February 1729 that
they had set up a new typefoundry, the director being Sieur Jacobson.1 Alberts
seems to have paid more attention to his private affairs than to his business and
was often out of town and abroad.2 It is no wonder that his business declined and
that he was making arrangements with his relations to sell out; he left in the spring

This foundry at The Hague had taken on Johann Michael Schmidt as punch¬
cutter, and in 1728 he cut a Small Pica Roman for it, and in the next year a Pica and
a Long Primer.5 Schmidt had so good a reputation that later he was invited to Berlin
by King Friedrich Wilhelm I of Prussia to set up a typefoundry under the king's
patronage. He was still in charge of it when he died in 1750.6

[Uytwerf lost his partner and dismissed his punchcutter at about the same time.]
He must have been relieved to find Fleischman thoroughly qualified to take the
place of Schmidt. Uytwerf had, no doubt, learned that he had taken on a very skilled
typefounder by the time that Fleischman showed him proofs of a Small Pica Roman
and Italic which he was cutting. These types were finished in the same year, 1729,

[5] The types mentioned are dated and attributed in the
Proef van letteren ... 's-Gravenhage R. С Alberts en H. Uytwerf.
See List of type-specimens No. 53. Johannes Enschedé refers
to these types in the foreword to his specimen-book of 1768.

[6] Fragments of Schmidt's biography in various archives
have not been put together. According to F. Bauer, Chronik
der Schriftgiessereien, 1928, who did not cite authorities, Schmidt
was trained in the Luther Foundry at Frankfurt and worked
afterwards for Wetstein in Amsterdam before going on to
The Hague (Bauer pp. 12—13). At The Hague in 1727 Schmidt
was given a contrait by Hermanus Uytwerf, bookseller at
Amsterdam, and Rutger Christoffel Alberts and Izaak van der
Kloot, associated printers and booksellers at The Hague.
Johann Michael Schmidt, recently living at Frankfurt am Main
and now at The Hague, is contracted for ten years to manage
the typefoundry, but Uytwerf and his associates may dismiss
him after two years from 28 July 1727 in case the typefoundry
does not prove to be a success. Schmidt's wife, AnnaCatharina,
née Koeglinne, must assist her husband in rubbing the cast
type, and their son, Johannes, ii-J- years old and not yet at
The Hague, must come as soon as possible to become his
father's apprentice and help (THGA, Notariëel Archief, vol.
2371,28 and 30 July 1727). From a deed drawn up at Schmidt's
request on 20 April 1730 it appears that Mr. Jacobson, book¬
keeper and Uytwerf's representative, had announced a few
weeks earlier that Schmidt was going to be dismissed, that he
would receive his salary for the last time on 22 April 1730,
and that the typefoundry was going to be continued at Amster¬
dam by Schmidt's foreman, 'Johan Leonard pijffer' (Johann
Leonard Pfeiffer), as well as by 'Johan Mighiel Vleijsman ende

Johan Mouritz Hafftenaer' (Johann Michael Fleischman and
Johan Maurits Hafftenaer). Schmidt regarding his dismission
as a breach of the contrait claims indemnification for vari¬
ous amounts, one of those being the costs for returning to
Germany with his wife and his children. After this deed had
been duly read to Mr. Jacobson the note was added that he
did not want to have anything to do with it because he was
the book-keeper no longer (THGA, Notariëel Archief, vol.
1650, 20 April 1730). Johannes Enschedé writes in the fore¬
word to his specimen-book of 1768 that he was informed
that Schmidt left The Hague and went to Berlin. Having been
there for a short time he left (Bauer, p. 13). From November
1732 until April 1736 he was working for Moretus in Antwerp
(Arch. Plant, vol. 793, pp. 138-159). Being stood off then, he
wrote two pathetic letters pleading for reinstatement (Ardi.
Plant, vol. 633; vol. 156, pp. 105-106), apparently without suc¬
cess. For Moretus he cut a Great Primer Roman, for which
punches and matrices survive, remodelled three sixteenth-
century faces and supplied missing and supplementary sorts
(Inventory ofthe Plantin-Moretus Museum Punches and Matrices, i960,
p. 155). In 1737 he went with the Swedish printer, Peter Momma,
to Stockholm to open a new typefoundry (Hugo Lagerström,
Peter Momma, 1912, pp. 11,17). Frederick the Great summoned
Schmidt and his son, Johann, to Berlin in 1742, when the
material from Kirchner's foundry at Brunswick was acquired
and brought to Berlin. Schmidt sorted out this material of
which one half was kept in Berlin forming the basis for the
Königliche Schriftgiesserei (Royal Typefoundry), and the
other half was sent to Hablitzl at Königsberg. Schmidt [and
probably his son too] cut punches for the Royal Typefoundry.
Johann Michael Schmidt died on 20 June 1750 and was suc¬
ceeded by his son, Johann, under whose direction business
declined. In 1752 Johann left for Leipzig. (Bauer pp. а—ѵЦ-
For his later career see pp. 293—295.

and sold to the firm.! It may have been on Fleischman's advice that Uytwerf moved
his foundry to Amsterdam, where he was in business as a [bookseller and] printer,
and where he lived for the rest of his life.2 The move can only have been made on
condition that Fleischman bound himself to work, at least for a time, only for
Uytwerf. Their contraer, to this effecì: is in our archives.3 It is dated 20 May 1730,
and may be translated as follows.

We the undersigned, Hermanus Uytwerf of the one part and Johann Michael Fleischman
ofthe other part, have agreed as follows.

H. Uytwerf takes the said J. M. Fleischman into his service for the term of two years certain
to occupy himself in his house with cutting punches, justifying matrices and all that pertains
to the calling of a letter-cutter or punchcutter. Fleischman will be bound for a sixth part of
each year, that is to say for two months in both years, to take part, should the need arise, in
casting such types as may be needed for Uytwerf's business. It is expressly agreed that for the