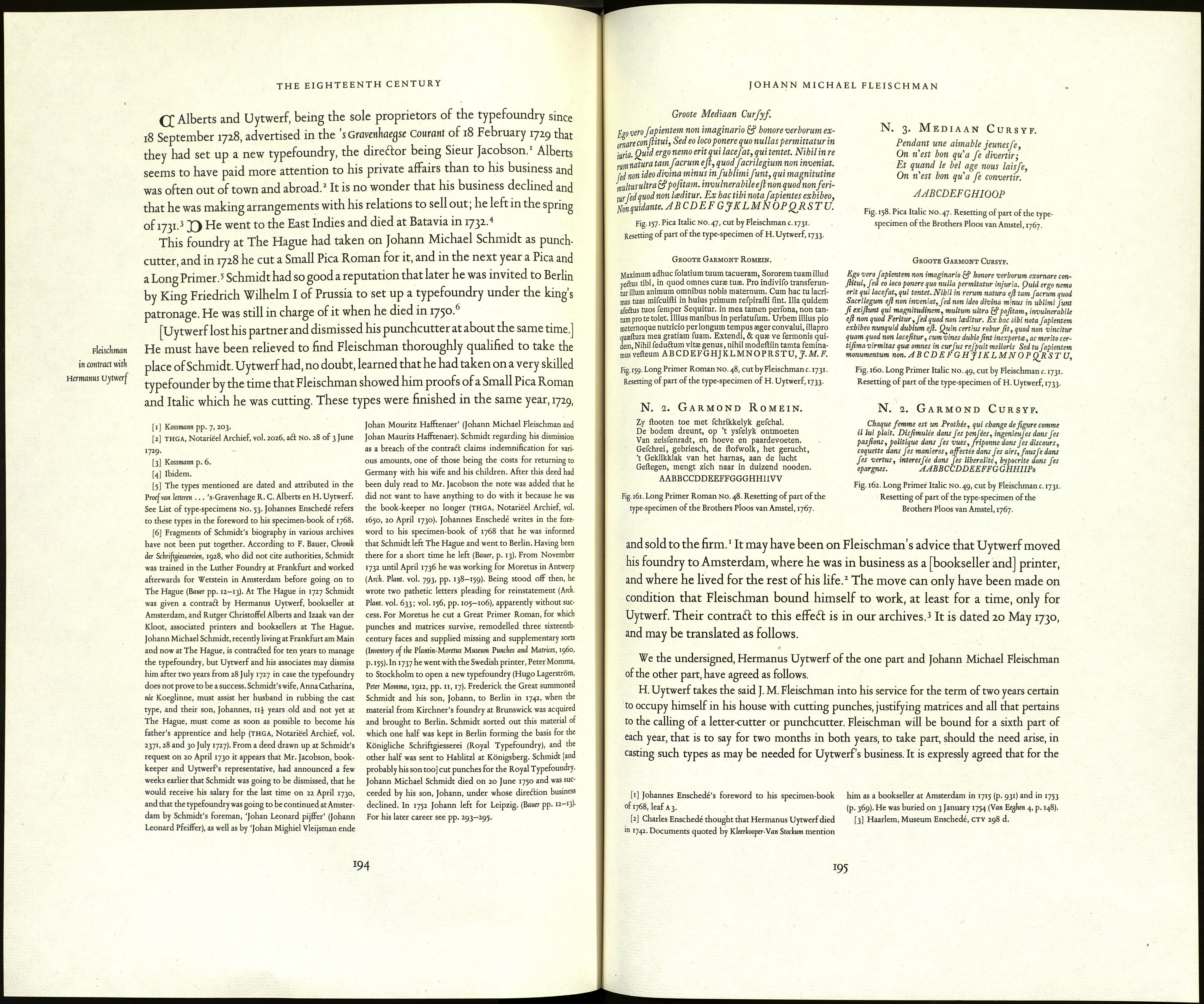 There had been this change in the character of the trade, but a long time had
still to pass before it won a respeded position in the eyes of the world. The type-
foundry of Voskens, the leading house in Holland at the turn of the century, re¬
mained in business until 1780.l At the beginning of the eighteenth century its
stock was increased by the skilful work of Bartholomeus Voskens the second.2
Later the firm only maintained its ground, and an inventory drawn up when the
last of the family died discloses very little enlargement of the stock since the days
of the Widow and Sons of Dirk Voskens.3

Let us review the typefoundries working in Holland [during the second decade]
of the century. Besides that of Voskens, there was one belonging to R. С Alberts
and H. Uytwerf at The Hague, and at Amsterdam those of Izaak van der Putte,
Hendrik and Anthonie Bruyn, and the daughter of J. J. Schipper.*1 have given my
opinion as to the antecedents of these businesses.5 All these eighteenth-century
typefounders, though they were printers too, depended on the sale of type for a
livelihood: they did not simply cast it for their own use. Not being punchcutters,
they had to be salesmen of the work of others. They found that the diffusion of
specimens of the types they could offer was necessary for success in their calling.
When these typefounders needed new types, they had to go to punchcutters who
were independent contractors or wait for a chance to buy matrices at auction. That
being so, it is common to find the same typefaces in more than one foundry; for a
punchcutter would sell strikes of his work to several customers. Likewise, such a
man would undertake commissions from one house after another.

In the book written for the jubilee of our firm in 18931 wrote what I could of the
history of these typefoundries : here I will summarize it, trying to clear up obscuri¬
ties and to corredi: what I wrote earlier.6 I shall pay particular attention to the
cutters of punches and such of their work as we have in our possession.

j. m. Fletsclwmn Unquestionably, the greatest punchcutter of the eighteenth century was Johann
Michael Fleischman. Born at Wòhrd, a suburb of Nuremberg, in 1701, he went first

[1] The history of the firm in the eighteenth century is Philippi) Cupy were still in operation in these years. Thomas

who went to the house in 1710, described the head of the p. 134) issued an undated specimen of his types at Amsterdam

firm as 'a man of great business having five or six men con- (Type Specimen Facsimiles 1, Sheet No. 15). His widow issued а

stantly at the furnace, besides boys to rub, and himself and specimen of Hebrew at Amsterdam in 1711 (ibid., p. 22. List

[2] In the specimens, incipit : Griexe Capitalen, and Pax una Voskens] by the letter he cut for him' (Rowe Mores p. 53; Red

ofthe cutter, B. Voskens, is put against some of the types and Cupi, of Amsterdam, was Rolu's contemporary. See also

typefoundries of the widow of Johannes Rolu and of (Joh. translated on p. 123.

to the Latin School, and it was not until he was twenty that he began his apprentice¬
ship to Konstantin Hartwig, predecessor in business of Johann Rudolf Adelung,
well known for his German types. According to custom the apprenticeship should
have lasted six years, but Fleischman showed such talents that after four years he
ranked among the most skilful tradesmen. He devoted himself specially to cutting
punches, and became so proficient at it that he made great improvements to his
master's range of types. Very early he made up his mind that Nuremberg was not
a place where he could work at this calling for long with much profit, and in 1727
he decided to leave it and make his way through Holland to France or England,
where he might hope to find adequate employment for his skill. On 1 Oftober in
that year he set out, but when he got to Frankfurt am Main he had to break his
journey.. -1 There he was taken into the Luther Foundry as a journeyman-caster
and stayed rather more than a year. He took to the road again on [13] October 1728,2
and reached Amsterdam [two or three] weeks later. Here he was given a place as
caster in the typefoundry of Izaak van der Putte. Neither at Frankfurt nor at Am¬
sterdam did he disclose his ability to cut punches. He worked for four or five weeks
for Van der Putte before going on to The Hague and finding employment in the
foundry belonging to the booksellers R.C.Alberts and H.Uytwerf.3

Hermanus Uytwerf was the son of a printer, Meindert Uytwerf, who was in
business at The Hague from 1683 until 1708, when he was succeeded by his widow
until 1733.4 In early life Hermanus learned his parents' trade,5 but in one way or
another he came to be a master typefounder in partnership with Rutger Christoffel
Alberts,6 without being concerned in a printing business carried on by his partner.7
Alberts was a printer at The Hague by 1719;8 but the types that he used did not
come from the foundry of which he was part-owner. The sale-catalogues of his
printing material show that it was his undivided property.. ?

[1] No doubt, Fleischman intended to go on the Wander- Hermanus and half-sister of Rutger Christoffel Alberts) made
sclmjt to gain experience in typefoundries in various places in arrangements for parting company as booksellers, printers,
Germany and even abroad. His passport was issued for the and typefounders. Alberts was willing to add to his own Van der
date of his departure, i October 1727, by the authorities Kloot's quarter-share in the typefoundry of which Hermanus
ofthe City of Nuremberg and it was valid for a journey from Uytwerf, bookseller at Amsterdam, owned the other half-
there to Frankfurt am Main. It is in the Museum Enschedé share (thga, Notariëel Archief, vol. 2026, aft No. 10). Rutger
at Haarlem, стѵ 298 с Christoffel Alberts was born at The Hague in 1691. After the
[2] This is the date of his passport issued at Mainz and death of his father in 1694 his mother, Johanna, née Steen-
valid for twenty days for a journey from there to Amsterdam. houwer, married Meyndert Uytwerf a few months later. Their
It is in the Museum Enschedé at Haarlem, стѵ 298 с fourth child was Hermanus (Kossmann pp. 1, 5, 415-416).

[3] The data given in this paragraph are mainly derived from [7] Kossmann p. 7. Hermanus Uytwerf had his own business

the foreword to the Enschedé specimen-book of 1768. Asked as a bookseller and printer at Amsterdam, and it was inde-

by Johannes Enschedé to do so Fleischman's son, Abraham, pendent of that of Alberts & Van der Kloot's at The Hague

Johannes Enschedé which is in the Museum Enschedé at [8] Kossmann p. 5.

[6] That was at the beginning of 1727. It appears from an advertisement in the Oprcchte Haerlemse Courant for 13 May 1728

der Kloot (the husband of Geertruida Uytwerf, sister of