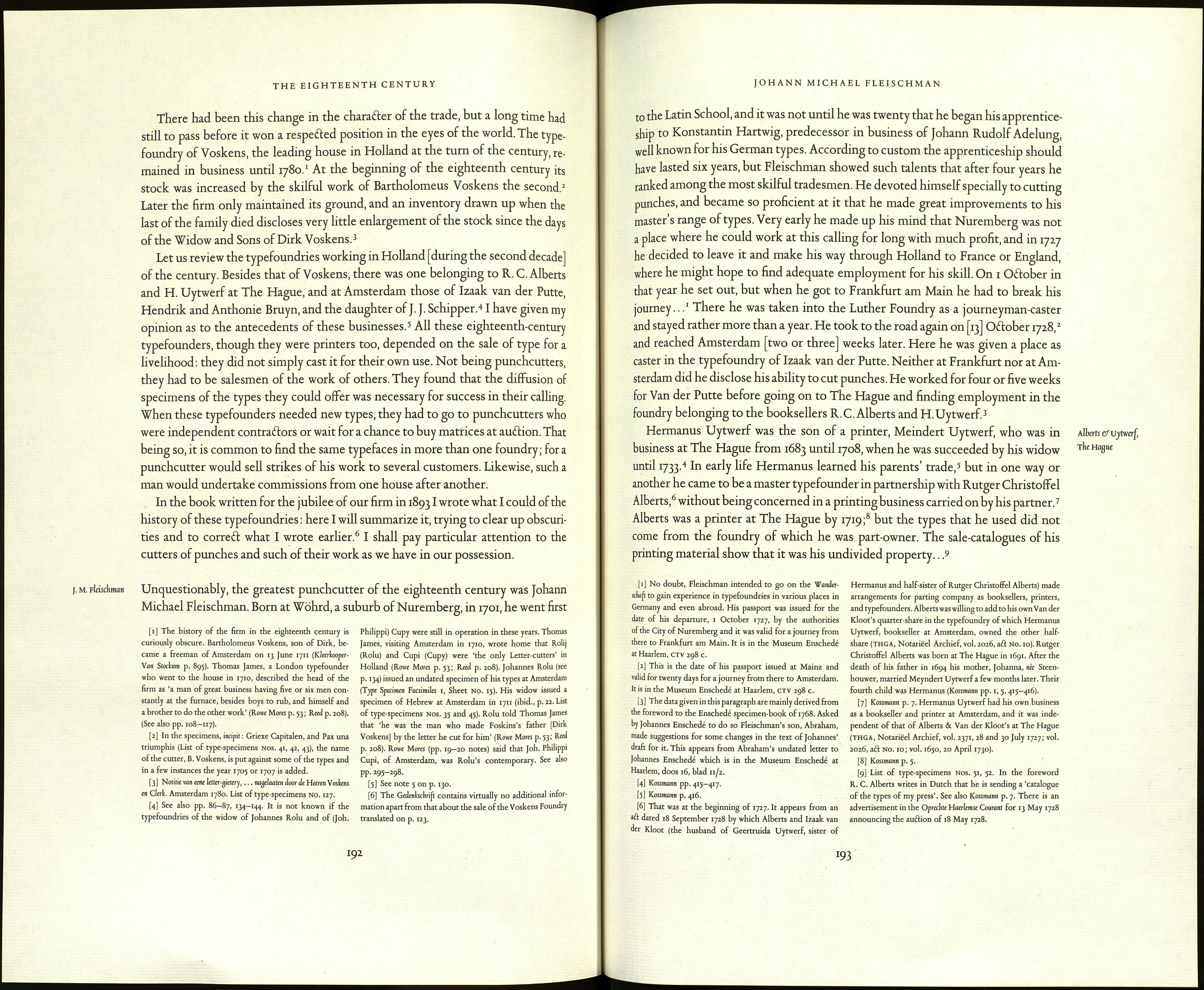 In discussing the types of the seventeenth century we were concerned with a handi¬
craft and its produits. When we come to the eighteenth century our task is a little
different. Typefounding undergoes a change: hitherto a manual trade, it becomes
increasingly an industrial undertaking. Formerly typefounders made type for their
own use: now we see them turning into suppliers of founts cast to order. In the
seventeenth century and the preceding time typefounders were also punchcutters :'
in the eighteenth century they are artists no longer, but manufacturers and mer¬
chants. So much so that when a punchcutter sets up in business as a typefounder,
we shall see him having to give way to someone more commercially-minded.

In our survey of the history of this trade we have noticed a lack of dealings
between typefounders, or at any rate between punchcutter-typefounders. Each
of them had a stock of matrices built up by the work of his hands and never
augmented by purchases from another.2 If, as in the case of the house of Blaeu, a
foundry was set up and equipped with matrices from elsewhere, it was designed
only to supply the needs of the owner and conducted not for commerce but as an
accessory to a printing business. While it was subordinated in this way to printing,
typefounding was regarded as a humble part of typography, and a man who worked
at it was of 'inferior' social status. This goes some way to account for the difficulty
of finding out about the earlier makers of type : the documents that would have
shed light on them have not been preserved, if they ever existed. In particular
we wonder whether the punchcutter-typefounders of the seventeenth century
thought it worth their while to distribute specially-composed specimens to show
what types they had to offer.3

[i] This seems far from the truth. Many were mere casters [3] Broadside inclusive specimens by typefounders were,

without even matrices of their own. And the Berners and very likely, designed at first for hanging up and giving away

Luthers, who conducted the largest typefoundry of the seven- at the Frankfurt fairs (R. Diehl in his introduction to G. Mori,

teenth century, seem to have dealt entirely in the work of Frankfurter Schriftproben, 1955, p. [1]). The earliest known example,

others, that of type by François Guyot (Type Specimen Facsimiles 1, Sheet

[г] Van Dijck, for example, sold types that he had not cut No. 1), may have been one of these, although Guyot lived at

eludes faces cut by Garamond, Granjon, and Tavernier. The with an added frame of flowers, probably to be associated

hands at the fairs at Frankfurt. In the preface to his specimen- of type-specimens Nos. 14 and 16; Type Specimen Facsimiles 1,

book of 1766 Fournier le Jeune vaunts himself on being the Sheets No. 6 and no. 7). Abraham van Dijck, however, had in

nrst typefounder to have cut all the types that he offered 1670 a specimen of the types of his foundry, a copy of which