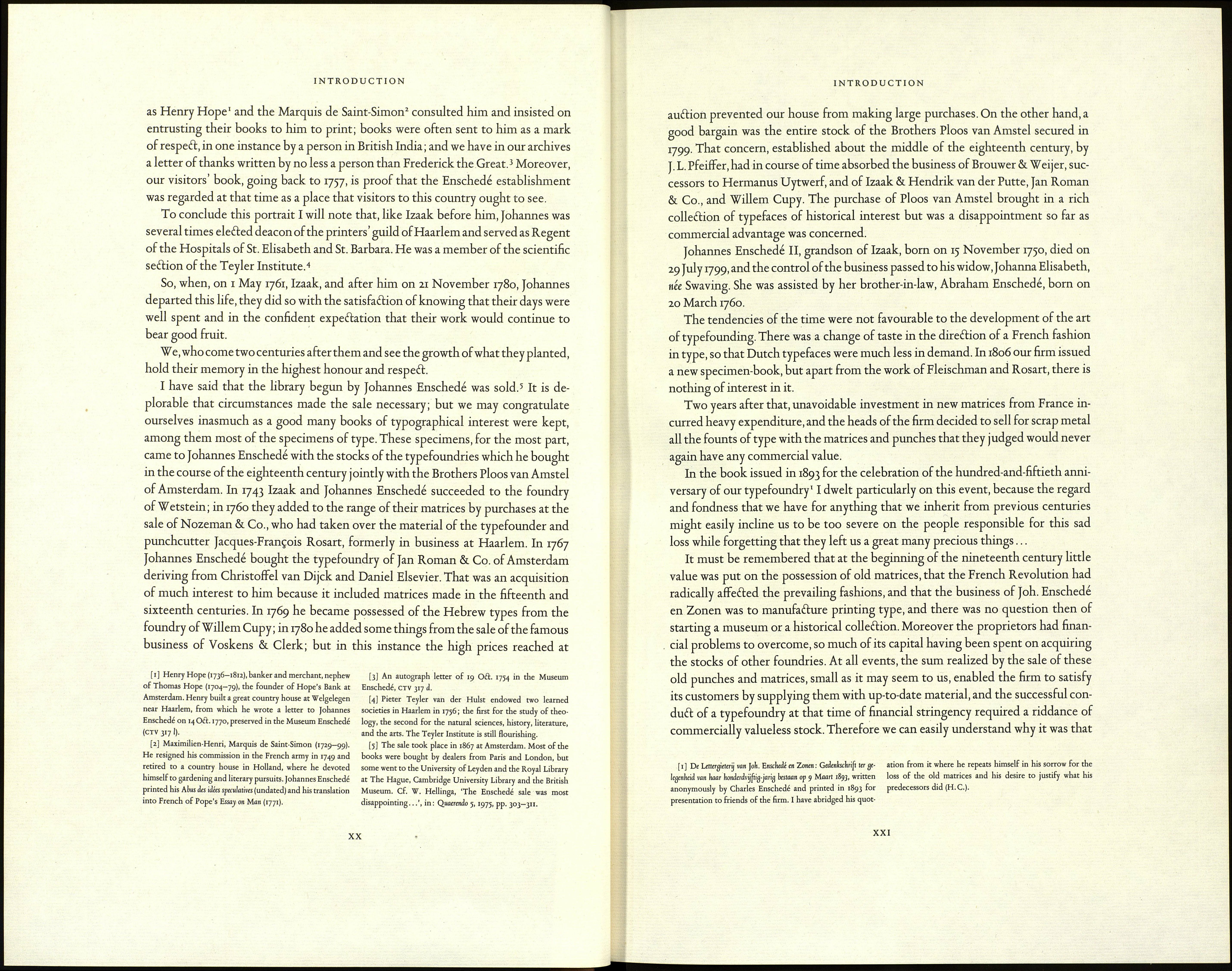 of which compel our admiration for an editor who could supply matter of such
varied and unfailing interest. After the death of his competent assistant, Johann
Christian Seiz, in 1748 Johannes had often to do the work himself, sometimes un¬
aided and for long spells. In order to do so he had to be conversant in the French,
German, English, and Italian languages. Because of his hard work and skilful
management the typefoundry became a flourishing concern. For that we have the
testimony, against his own interest, of the punchcutter and typefounder, Jacques-
François Rosart, who began practising his trades at Haarlem in 1740, ' but removed
in 1759 to Brussels. These were the opening words of the preface to a specimen
of his types: 'My typefoundry lately established in Brussels was originally set up
in Holland, at Haarlem, in the year 1740, on the ist. of May, three years before
that of Messrs. Izaak and Johannes Enschedé ; but the rapid progress and perfection
of their foundry seemed to strangle the elder one'.

Johannes Enschedé had valuable support in his efforts to improve his type-
foundry from his punchcutter, Joan Michael Fleischman. This artist, who had
previously done a good deal of work for the Wetsteins, put his remarkable talent
freely at the disposal of Enschedé and supplied him with a series of typefaces,
many of which are even now highly appreciated for their accomplished workman¬
ship. I could not, on such an occasion as this, refrain from doing homage to his
memory by quoting what my ancestor Johannes wrote of Fleischman soon after the
punchcutter's death in the preface to the book of type-specimens issued in 1768:

The great artist, Fleischman, devoted eighteen years to cutting punches specially for me and
to all the labour that the preparation of many faces of type involves. We have here sixty-eight
boxes of punches by Fleischman, the produci: of care and toil from which my descendants may
profit for many centuries to come, if it please Divine Providence that this typefoundry remain
in good hands, its owners keeping it in good order and not neglecting it; then the name and
the art of Fleischman will be honoured for hundreds of years yet, and those who bestowed their
patronage on him will not be forgotten.2

That, however, is not the whole of the portrait that I want to draw for you, at any
rate in outline, of the first Johannes. What I have shown you so far should be
enough to convince you that art in all its forms made a powerful appeal to him.
His diverse activities brought him into contaci: with the artists of his day, and
several of their works were due to their contacts with him. I will mention only
Jacob Folkema, Taco Jelgersma, Cornells van Noorde, engravings of the genre of
Haarlem Market, the portraits of Jacoba van Beyeren and Frank van Borselen. To
these artistic leanings of his we owe the marvellous water-colours by Van Noorde,
which have preserved for us the portraits of the Enschedé's.

His ventures into this field extended yet farther. He had a practised eye for

[2] In his will written (in Dutch) in 1780 he exhorts his God forbid!), this letter foundry would be a fit purchase for
posterity to take great care of the matrices for casting type, a king or one of the greatest princes of Europe !'.

true art, and he made a collection of paintings and drawings whose great merit
was not recognised until later. The catalogue made in 1786, when part of the col¬
lection was sold, gives particulars of some hundred items, among them works by
Hobbema, Jan Steen, Miereveldt, and Frans Hals. We read with a shock of surprise
that the painting of Jonkr Ramp and his Mistress beautifully done by Hals sold for
21 florins, 10 stivers, and that the well-known work by Jan van Eyck, now one of the
most famous pictures in the Musée Royal des Beaux Arts at Antwerp,1 changed
hands at 100 florins, and other things of that kind. In the collection were more
than 700 drawings besides prints and illustrated books.

Another collection not less in value was the library begun by Johannes I Enschedé,
which with additions by his successors, existed until 1867. He set greater store by
books even than by pictures, because of their bearing on his trade. What interested
him above all was the impression — the printed page —, the ultimate objective
of the cutter of the punches and the typefounder. Books attracted him equally
for another reason: they led him by degrees to historical research aimed at finding
out the provenance of the various founts of type. It is not surprising that in conse¬
quence Johannes as a good son of Haarlem went back to the origin of printing,
traditionally credited to Laurens Janszoon Coster of this town. The dispute be¬
tween Haarlem and Mainz, settled (it may be supposed) only in recent years, had
many partisans lined up on either side at that time. Enschedé knew that in order
to play an effective part in it he must be informed about technique, and he went
to great trouble to find examples of very early printing. His searches tracked down
some rare relics of the first presses, now among the most precious exhibits in our
communal museum.2 The collection of books, therefore, was not an end in itself
but a means of bringing the facfs to light when given careful study. He did not
publish the results of his investigations, but they are not lost: his notes have an
honoured place in our archives as the produci: of the untiring labour, the erudition,
and the technical proficiency of the writer.

Enschedé's researches were bound to bring him into contaci: with learned men
in various fields and with patrons of the arts. We keep his voluminous correspond¬
ence with Gerard Meerman, author of Origines typographicae, a book which Johannes
refused to print for the singular reason that Meerman persisted in maintaining
that Coster had, at first, used wooden type. The letters are evidence that Johannes
contributed very largely to the compiling of the book. He exchanged letters, also,
with the Archbishop of Canterbury, John Potter,3 while other eminent men, such

[1] A small painting of St. Barbara, which has on the old are exhibited in the Frans Hals Museum in Haarlem,

frame the words, 'Johes de Eyck me fecit-1437'. It has on [3] The Museum Enschedé preserves a brief note from

the back a note that Joz (sic] Enschedé bought it on 24 June the archbishop's secretary acknowledging Mr. Enschedé's

1769. After the sale it passed through several hands, and the kindness in sending a book by J. С Seiz in which is repeated

gallery, where it was received in 1841 (Information kindly of printing into England by one of Coster's workmen at the

given me by Dr. Leon Voet. H. C). instigation of Cardinal Bourchier, Archbishop of Canterbury