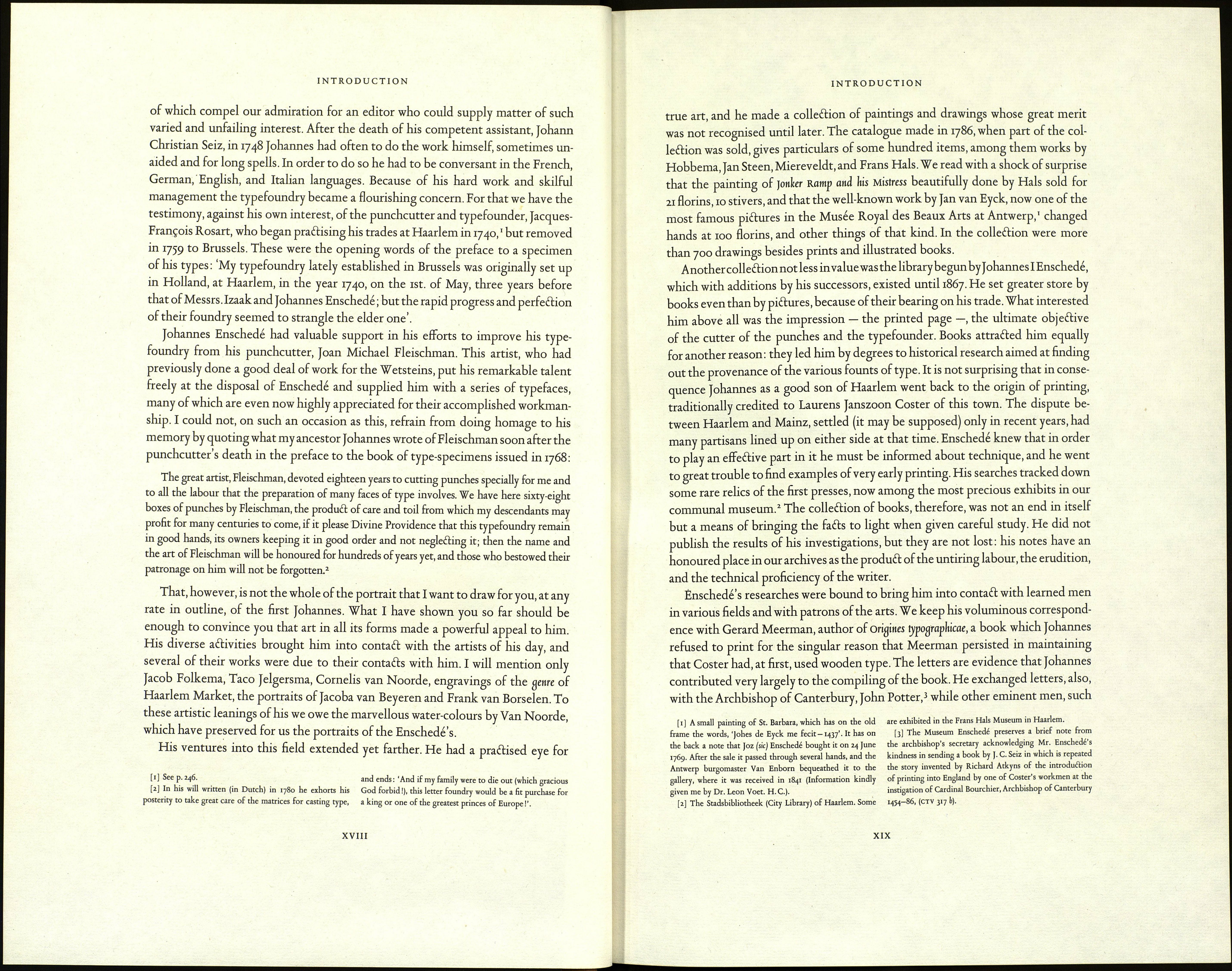 This book is intended as a contribution to typography in general, but the history
of our firm and the doings of its former principals have so large a part in it that
I may appropriately start by giving some account of them.1

The founder of the firm was Izaak Enschedé, fifth son of Johannes Enscheda,2
who left Groningen in 1670 to set up in business at Haarlem as a clockmaker.
Izaak, born on 16 April 1681, was admitted to the printers' guild of Haarlem when
he was 22 years old. He opened a small printing office in the Frankestraat, which
gradually attracted custom and developed into a substantial business, thanks to
the united efforts of Izaak and his son Johannes.

Johannes Enschedé, born on 10 June 1708, showed at an early age a remarkable
aptitude for a career in printing, and since it is largely to him that our house owes
its present good reputation, the reader will allow me to make him better ac¬
quainted with this ancestor of mine whose talents were so outstanding. I could
not do so better than by quoting the words spoken about him by my brother
Johannes at a celebration of the bicentenary of our firm in 1903.

My brother recalled that Izaak's printing business was several times moved to
bigger premises ; that in 1737 it undertook the printing and publishing of a news¬
paper, the oprechte Haerlemse Courant;3 that the sale of books and stationery were
added to it; and that, finally, the Enschedé's, father and son, bought the type-
founding equipment of the Wetsteins,4 in 1743 and so doing entered into the
typefounding trade.

The first Johannes Enschedé took a large part in all these varied activities. Of
his skill with engraving tools we can judge by blocks cut by him that are still in
our possession. As publisher he did much of the editing himself. Besides looking
after two printing-offices and the production of the newspaper, he found time for
two monthly periodicals, De Europise Staats-Secretaris5 and Het Européis Maoazyn,6 both

[1] The history of the family in this book hardly extends of learned printing, bookselling, and publishing at Amster-
beyond the second generation of printers, ending with the dam in 1676, and it was carried on by his sons until in 1742.
death of the first Johannes in 1780. An account of the seven A grandson, Hendrik Floris Wetstein, stocked a small type-
generations of Enschedé's who have taken part in the business, foundry. Charles Enschedé relates the history of these scholar-
1703-1953, written by Jan van Krimpen and printed in Dutch printers later in this book.

Harry Carter (The House of Enschedéj, based on a longer work by t'zamenhang al t'merkwaardige 10 Staats- als ander Nietiws in Europa en

in the latter year for friends of the firm. Johannes Enschedé from January 1741 (the first issue) until

[2] This spelling was used for the surname in Groningen. June 1749 and was continued by Dirk Swart at Amsterdam at

[3] This thrice-weekly news-sheet began its long career in least until 1761.
1656. It started to publish daily in 1847. During the Second [6] The Museum Enschedé has copies of Het Européis Ma-
World War it was amalgamated with Het Haarlems Dagblad, gazyn, der bijzondere zahn in het rijli der natuur, in de Staaten en in de
thus losing its separate identity. weetenschappen voorvallende, a small 8vo. of which 24 issues were

[4] Johann Heinrich Wetstein, from Basle, began a business published in 1754-56.