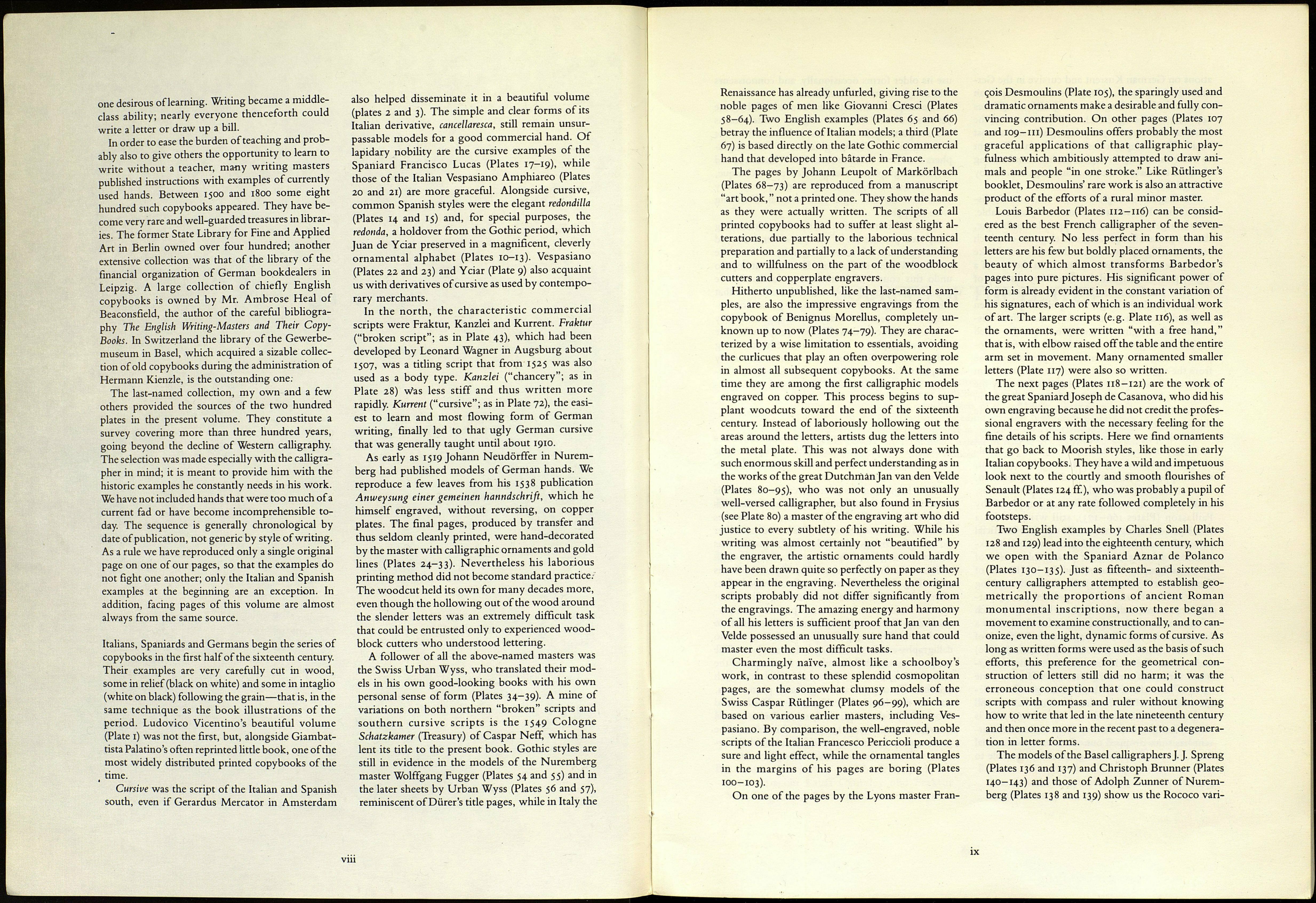 one desirous of learning. Writing became a middle-
class ability; nearly everyone thenceforth could
write a letter or draw up a bill.

In order to ease the burden of teaching and prob¬
ably also to give others the opportunity to learn to
write without a teacher, many writing masters
published instructions with examples of currently
used hands. Between 1500 and 1800 some eight
hundred such copybooks appeared. They have be¬
come very rare and well-guarded treasures in librar¬
ies. The former State Library for Fine and Applied
Art in Berlin owned over four hundred; another
extensive collection was that of the library of the
financial organization of German bookdealers in
Leipzig. A large collection of chiefly English
copybooks is owned by Mr. Ambrose Heal of
Beaconsfield, the author of the careful bibliogra¬
phy The English Writing-Masters and Their Copy-
Books. In Switzerland the library of the Gewerbe-
museum in Basel, which acquired a sizable collec¬
tion of old copybooks during the administration of
Hermann Kienzle, is the outstanding one:

The last-named collection, my own and a few
others provided the sources of the two hundred
plates in the present volume. They constitute a
survey covering more than three hundred years,
going beyond the decline of Western calligraphy.
The selection was made especially with the calligra-
pher in mind; it is meant to provide him with the
historic examples he constantly needs in his work.
We have not included hands that were too much of a
current fad or have become incomprehensible to¬
day. The sequence is generally chronological by
date of publication, not generic by style of writing.
As a rule we have reproduced only a single original
page on one of our pages, so that the examples do
not fight one another; only the Italian and Spanish
examples at the beginning are an exception. In
addition, facing pages of this volume are almost
always from the same source.

Italians, Spaniards and Germans begin the series of
copybooks in the first half of the sixteenth century.
Their examples are very carefully cut in wood,
some in relief (black on white) and some in intaglio
(white on black) following the grain—that is, in the
same technique as the book illustrations of the
period. Ludovico Vicentino's beautiful volume
(Plate 1) was not the first, but, alongside Giambat¬
tista Palatinos often reprinted little book, one of the
most widely distributed printed copybooks of the
time.

Cursive was the script of the Italian and Spanish
south, even if Gerardus Mercator in Amsterdam

also helped disseminate it in a beautiful volume
(plates 2 and 3). The simple and clear forms of its
Italian derivative, cancellaresca, still remain unsur¬
passable models for a good commercial hand. Of
lapidary nobility are the cursive examples of the
Spaniard Francisco Lucas (Plates 17-19). while
those of the Italian Vespasiano Amphiareo (Plates
20 and 21) are more graceful. Alongside cursive,
common Spanish styles were the elegant redondilla
(Plates 14 and 15) and, for special purposes, the
redonda, a holdover from the Gothic period, which
Juan de Yciar preserved in a magnificent, cleverly
ornamental alphabet (Plates 10-13). Vespasiano
(Plates 22 and 23) and Yciar (Plate 9) also acquaint
us with derivatives of cursive as used by contempo¬
rary merchants.

In the north, the characteristic commercial
scripts were Fraktur, Kanzlei and Kurrent. Fraktur
("broken script"; as in Plate 43), which had been
developed by Leonard Wagner in Augsburg about
1507, was a titling script that from 1525 was also
used as a body type. Kanzlei ("chancery"; as in
Plate 28) Was less stiff and thus written more
rapidly. Kurrent ("cursive"; as in Plate 72), the easi¬
est to learn and most flowing form of German
writing, finally led to that ugly German cursive
that was generally taught until about 1910.

As early as 1519 Johann Neudörffer in Nurem¬
berg had published models of German hands. We
reproduce a few leaves from his 1538 publication
Anweysung einer gemeinen hanndschrift, which he
himself engraved, without reversing, on copper
plates. The final pages, produced by transfer and
thus seldom cleanly printed, were hand-decorated
by the master with calligraphic ornaments and gold
lines (Plates 24-33). Nevertheless his laborious
printing method did not become standard practice.
The woodcut held its own for many decades more,
even though the hollowing out of the wood around
the slender letters was an extremely difficult task
that could be entrusted only to experienced wood¬
block cutters who understood lettering.

A follower of all the above-named masters was
the Swiss Urban Wyss, who translated their mod¬
els in his own good-looking books with his own
personal sense of form (Plates 34-39)- A mine of
variations on both northern "broken" scripts and
southern cursive scripts is the 1549 Cologne
Schatzkamer (Treasury) of Caspar Neff, which has
lent its title to the present book. Gothic styles are
still in evidence in the models of the Nuremberg
master Wolffgang Fugger (Plates 54 and 55) and in
the later sheets by Urban Wyss (Plates 56 and 57),
reminiscent of Diirer's title pages, while in Italy the

Renaissance has already unfurled, giving rise to the
noble pages of men like Giovanni Cresci (Plates
58-64). Two English examples (Plates 65 and 66)
betray the influence of Italian models; a third (Plate
67) is based directly on the late Gothic commercial
hand that developed into bâtarde in France.

The pages by Johann Leupolt of Markörlbach
(Plates 68-73) are reproduced from a manuscript
"art book, " not a printed one. They show the hands
as they were actually written. The scripts of all
printed copybooks had to suffer at least slight al¬
terations, due partially to the laborious technical
preparation and partially to a lack of understanding
and to willfulness on the part of the woodblock
cutters and copperplate engravers.

Hitherto unpublished, like the last-named sam¬
ples, are also the impressive engravings from the
copybook of Benignus Morellus, completely un¬
known up to now (Plates 74-79). They are charac¬
terized by a wise limitation to essentials, avoiding
the curlicues that play an often overpowering role
in almost all subsequent copybooks. At the same
time they are among the first calligraphic models
engraved on copper. This process begins to sup¬
plant woodcuts toward the end of the sixteenth
century. Instead of laboriously hollowing out the
areas around the letters, artists dug the letters into
the metal plate. This was not always done with
such enormous skill and perfect understanding as in
the works of the great Dutchman Jan van den Velde
(Plates 80-95), who was not only an unusually
well-versed calligraphier, but also found in Frysius
(see Plate 80) a master of the engraving art who did
justice to every subtlety of his writing. While his
writing was almost certainly not "beautified" by
the engraver, the artistic ornaments could hardly
have been drawn quite so perfectly on paper as they
appear in the engraving. Nevertheless the original
scripts probably did not differ significantly from
the engravings. The amazing energy and harmony
of all his letters is sufficient proof that Jan van den
Velde possessed an unusually sure hand that could
master even the most difficult tasks.

Charmingly naïve, almost like a schoolboy's
work, in contrast to these splendid cosmopolitan
pages, are the somewhat clumsy models of the
Swiss Caspar Rütlinger (Plates 96-99), which are
based on various earlier masters, including Ves¬
pasiano. By comparison, the well-engraved, noble
scripts of the Italian Francesco Periccioli produce a
sure and light effect, while the ornamental tangles
in the margins of his pages are boring (Plates
100-103).

On one of the pages by the Lyons master Fran¬

çois Desmoulins (Plate 105), the sparingly used and
dramatic ornaments make a desirable and fully con¬
vincing contribution. On other pages (Plates 107
and 109-in) Desmoulins offers probably the most
graceful applications of that calligraphic play¬
fulness which ambitiously attempted to draw ani¬
mals and people "in one stroke." Like Riitlinger's
booklet, Desmoulins' rare work is also an attractive
product of the efforts of a rural minor master.

Louis Barbedor (Plates 112-116) can be consid¬
ered as the best French calligrapher of the seven¬
teenth century. No less perfect in form than his
letters are his few but boldly placed ornaments, the
beauty of which almost transforms Barbedor's
pages into pure pictures. His significant power of
form is already evident in the constant variation of
his signatures, each of which is an individual work
of art. The larger scripts (e.g. Plate 116), as well as
the ornaments, were written "with a free hand,"
that is, with elbow raised off the table and the entire
arm set in movement. Many ornamented smaller
letters (Plate 117) were also so written.

The next pages (Plates 118-121) are the work of
the great Spaniard Joseph de Casanova, who did his
own engraving because he did not credit the profes¬
sional engravers with the necessary feeling for the
fine details of his scripts. Here we find ornaments
that go back to Moorish styles, like those in early
Italian copybooks. They have a wild and impetuous
look next to the courtly and smooth flourishes of
Senault (Plates 124 ff ), who was probably a pupil of
Barbedor or at any rate followed completely in his
footsteps.

Two English examples by Charles Snell (Plates
128 and 129) lead into the eighteenth century, which
we open with the Spaniard Aznar de Polanco
(Plates 130-135). Just as fifteenth- and sixteenth-
century calligraphers attempted to establish geo¬
metrically the proportions of ancient Roman
monumental inscriptions, now there began a
movement to examine constructionally, and to can¬
onize, even the light, dynamic forms of cursive. As
long as written forms were used as the basis of such
efforts, this preference for the geometrical con¬
struction of letters still did no harm; it was the
erroneous conception that one could construct
scripts with compass and ruler without knowing
how to write that led in the late nineteenth century
and then once more in the recent past to a degenera¬
tion in letter forms.