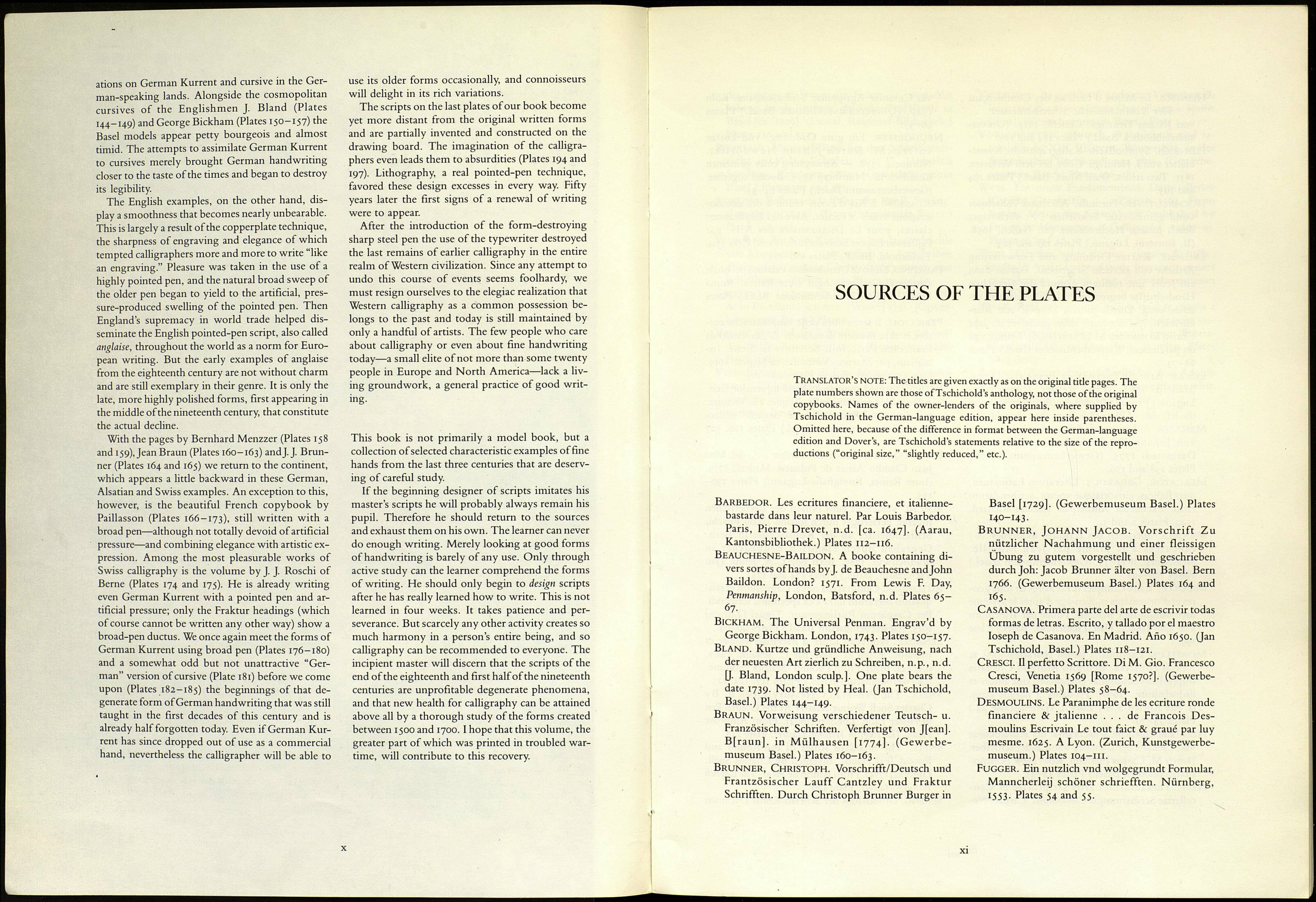 ations on German Kurrent and cursive in the Ger¬
man-speaking lands. Alongside the cosmopolitan
cursives of the Englishmen J. Bland (Plates
144-149) and George Bickham (Plates 150-157) the
Basel models appear petty bourgeois and almost
timid. The attempts to assimilate German Kurrent
to cursives merely brought German handwriting
closer to the taste of the times and began to destroy
its legibility.

The English examples, on the other hand, dis¬
play a smoothness that becomes nearly unbearable.
This is largely a result of the copperplate technique,
the sharpness of engraving and elegance of which
tempted calligraphers more and more to write "like
an engraving." Pleasure was taken in the use of a
highly pointed pen, and the natural broad sweep of
the older pen began to yield to the artificial, pres¬
sure-produced swelling of the pointed pen. Then
England's supremacy in world trade helped dis¬
seminate the English pointed-pen script, also called
anglaise, throughout the world as a norm for Euro¬
pean writing. But the early examples of anglaise
from the eighteenth century are not without charm
and are still exemplary in their genre. It is only the
late, more highly polished forms, first appearing in
the middle of the nineteenth century, that constitute
the actual decline.

With the pages by Bernhard Menzzer (Plates 158
and 159), Jean Braun (Plates 160-163) and J. J. Brun¬
ner (Plates 164 and 165) we return to the continent,
which appears a little backward in these German,
Alsatian and Swiss examples. An exception to this,
however, is the beautiful French copybook by
Paillasson (Plates 166-173), still written with a
broad pen—although not totally devoid of artificial
pressure—and combining elegance with artistic ex¬
pression. Among the most pleasurable works of
Swiss calligraphy is the volume by J. J. Roschi of
Berne (Plates 174 and 175). He is already writing
even German Kurrent with a pointed pen and ar¬
tificial pressure; only the Fraktur headings (which
of course cannot be written any other way) show a
broad-pen ductus. We once again meet the forms of
German Kurrent using broad pen (Plates 176-180)
and a somewhat odd but not unattractive "Ger¬
man" version of cursive (Plate 181) before we come
upon (Plates 182-185) the beginnings ofthat de¬
generate form of German handwriting that was still
taught in the first decades of this century and is
already half forgotten today. Even if German Kur¬
rent has since dropped out of use as a commercial
hand, nevertheless the calligraphier will be able to

use its older forms occasionally, and connoisseurs
will delight in its rich variations.

The scripts on the last plates of our book become
yet more distant from the original written forms
and are partially invented and constructed on the
drawing board. The imagination of the calligra¬
phers even leads them to absurdities (Plates 194 and
197). Lithography, a real pointed-pen technique,
favored these design excesses in every way. Fifty
years later the first signs of a renewal of writing
were to appear.

After the introduction of the form-destroying
sharp steel pen the use of the typewriter destroyed
the last remains of earlier calligraphy in the entire
realm of Western civilization. Since any attempt to
undo this course of events seems foolhardy, we
must resign ourselves to the elegiac realization that
Western calligraphy as a common possession be¬
longs to the past and today is still maintained by
only a handful of artists. The few people who care
about calligraphy or even about fine handwriting
today—a small elite of not more than some twenty
people in Europe and North America—lack a liv¬
ing groundwork, a general practice of good writ¬
ing.

This book is not primarily a model book, but a
collection of selected characteristic examples of fine
hands from the last three centuries that are deserv¬
ing of careful study.

If the beginning designer of scripts imitates his
master's scripts he will probably always remain his
pupil. Therefore he should return to the sources
and exhaust them on his own. The learner can never
do enough writing. Merely looking at good forms
of handwriting is barely of any use. Only through
active study can the learner comprehend the forms
of writing. He should only begin to design scripts
after he has really learned how to write. This is not
learned in four weeks. It takes patience and per¬
severance. But scarcely any other activity creates so
much harmony in a person's entire being, and so
calligraphy can be recommended to everyone. The
incipient master will discern that the scripts of the
end of the eighteenth and first half of the nineteenth
centuries are unprofitable degenerate phenomena,
and that new health for calligraphy can be attained
above all by a thorough study of the forms created
between 1500 and 1700. I hope that this volume, the
greater part of which was printed in troubled war¬
time, will contribute to this recovery.

SOURCES OF THE PLATES

TRANSLATOR'S NOTE: The titles are given exactly as on the original title pages. The
plate numbers shown are those of Tschichold's anthology, not those of the original
copybooks. Names of the owner-lenders of the originals, where supplied by
Tschichold in the German-language edition, appear here inside parentheses.
Omitted here, because of the difference in format between the German-language
edition and Dover's, are Tschichold's statements relative to the size of the repro¬
ductions ("original size," "slightly reduced," etc.).