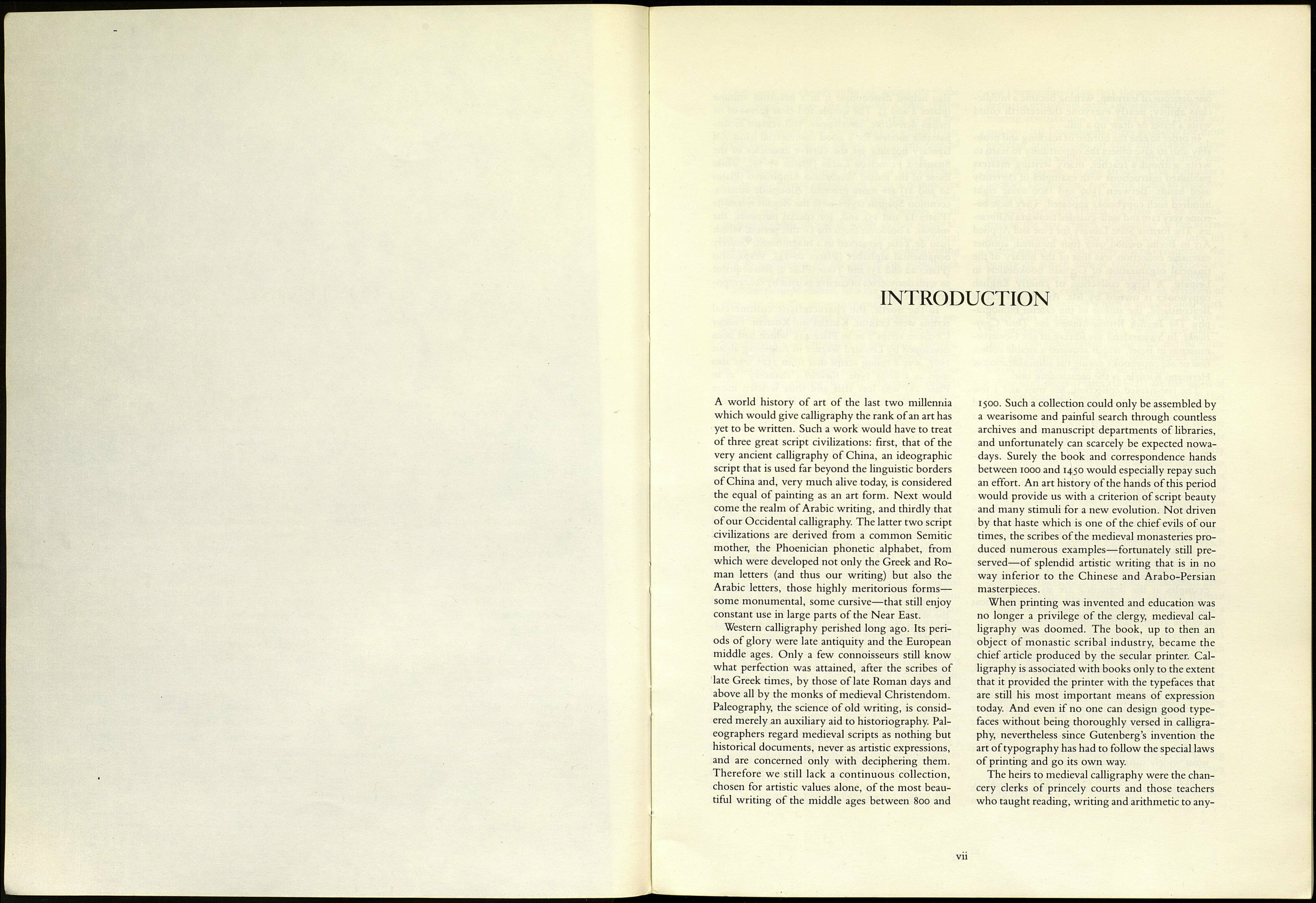 A world history of art of the last two millennia
which would give calligraphy the rank of an art has
yet to be written. Such a work would have to treat
of three great script civilizations: first, that of the
very ancient calligraphy of China, an ideographic
script that is used far beyond the linguistic borders
of China and, very much alive today, is considered
the equal of painting as an art form. Next would
come the realm of Arabic writing, and thirdly that
of our Occidental calligraphy. The latter two script
civilizations are derived from a common Semitic
mother, the Phoenician phonetic alphabet, from
which were developed not only the Greek and Ro¬
man letters (and thus our writing) but also the
Arabic letters, those highly meritorious forms—
some monumental, some cursive—that still enjoy
constant use in large parts of the Near East.

Western calligraphy perished long ago. Its peri¬
ods of glory were late antiquity and the European
middle ages. Only a few connoisseurs still know
what perfection was attained, after the scribes of
late Greek times, by those of late Roman days and
above all by the monks of medieval Christendom.
Paleography, the science of old writing, is consid¬
ered merely an auxiliary aid to historiography. Pal¬
eographers regard medieval scripts as nothing but
historical documents, never as artistic expressions,
and are concerned only with deciphering them.
Therefore we still lack a continuous collection,
chosen for artistic values alone, of the most beau¬
tiful writing of the middle ages between 800 and

1500. Such a collection could only be assembled by
a wearisome and painful search through countless
archives and manuscript departments of libraries,
and unfortunately can scarcely be expected nowa¬
days. Surely the book and correspondence hands
between 1000 and 1450 would especially repay such
an effort. An art history of the hands of this period
would provide us with a criterion of script beauty
and many stimuli for a new evolution. Not driven
by that haste which is one of the chief evils of our
times, the scribes of the medieval monasteries pro¬
duced numerous examples—fortunately still pre¬
served—of splendid artistic writing that is in no
way inferior to the Chinese and Arabo-Persian
masterpieces.

When printing was invented and education was
no longer a privilege of the clergy, medieval cal¬
ligraphy was doomed. The book, up to then an
object of monastic scribal industry, became the
chief article produced by the secular printer. Cal¬
ligraphy is associated with books only to the extent
that it provided the printer with the typefaces that
are still his most important means of expression
today. And even if no one can design good type¬
faces without being thoroughly versed in calligra¬
phy, nevertheless since Gutenberg's invention the
art of typography has had to follow the special laws
of printing and go its own way.

The heirs to medieval calligraphy were the chan¬
cery clerks of princely courts and those teachers
who taught reading, writing and arithmetic to any-