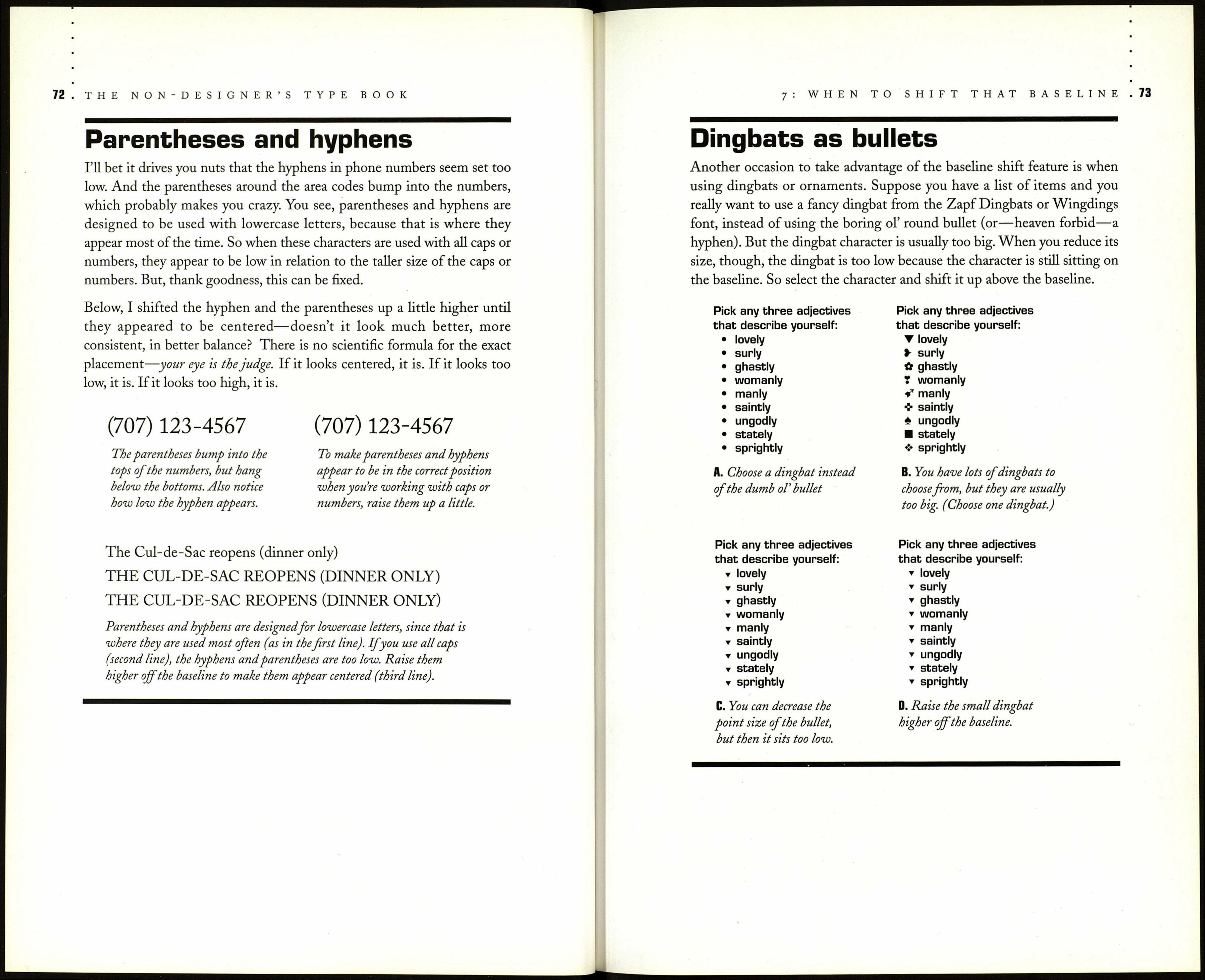 Just because you know how to use em and en dashes, don't ignore hyphens!
Em and en dashes do not replace hyphens—they simply replace the incor¬
rect uses of the hyphen. If you are breaking a word at the end of a line (as in
the line above), or if you are using a compound adjective as in "blue-green
eyes," of course type a hyphen!

The following situation is difficult to describe, so I am going to illustrate
it instead. When you have something like this:

Martha was both a first-place and second-place winner
in the gravedigging contest.

"First-place" and "second-place" are adjectives composed of two words,
making them "compound." You probably want to combine those com¬
pound adjectives into something like this:

Martha was both a first- and second-place winner
in the gravedigging contest.

Does it bug you that the word "first" has a hyphen after it? Well, too bad
because that is the correct way to set the text. The hyphen indicates that
this word is also connected with the rest of the adjective. Once you under¬
stand and accept the correctness of it, you can have a li trie uppity attitude
when you see others set it wrong. Gently teach them.

(Junen to Shift that
vaseline

Ahhh, so you have surely by now read The Mac is not a typewriter or The PC
is not a typewriter, as well as the previous chapters in this book, and you
have been diligently typing one space after periods, using real apostrophes
and quotation marks, putting the apostrophes in the right places, and
creating true fractions. Right? Now that you're feeling sassy, it's time to
move on to a more sophisticated matter: baseline shift.*

First, let's clarify the term baseline. The baseline is the invisible line upon
which all the characters sit, as shown below. Some characters, such as j, p,
g, and y, have strokes that hang below the baseline; these strokes are called
the "descenders." The term "baseline shift" refers to moving characters up
or down in relation to that baseline.

The grey line indicates the baseline of the text. Most characters
are designed to sit directly on the baseline; descenders hang below.

Once you are familiar with the baseline shift technique, you will find uses
for it more often than you might think!

* The techniques in this chapter can only be accomplished in page layout programs,
such as Adobe PageMaker or QuarkXPress. It's possible to do them in some word
processing programs, but it takes much more effort. Check your manual.