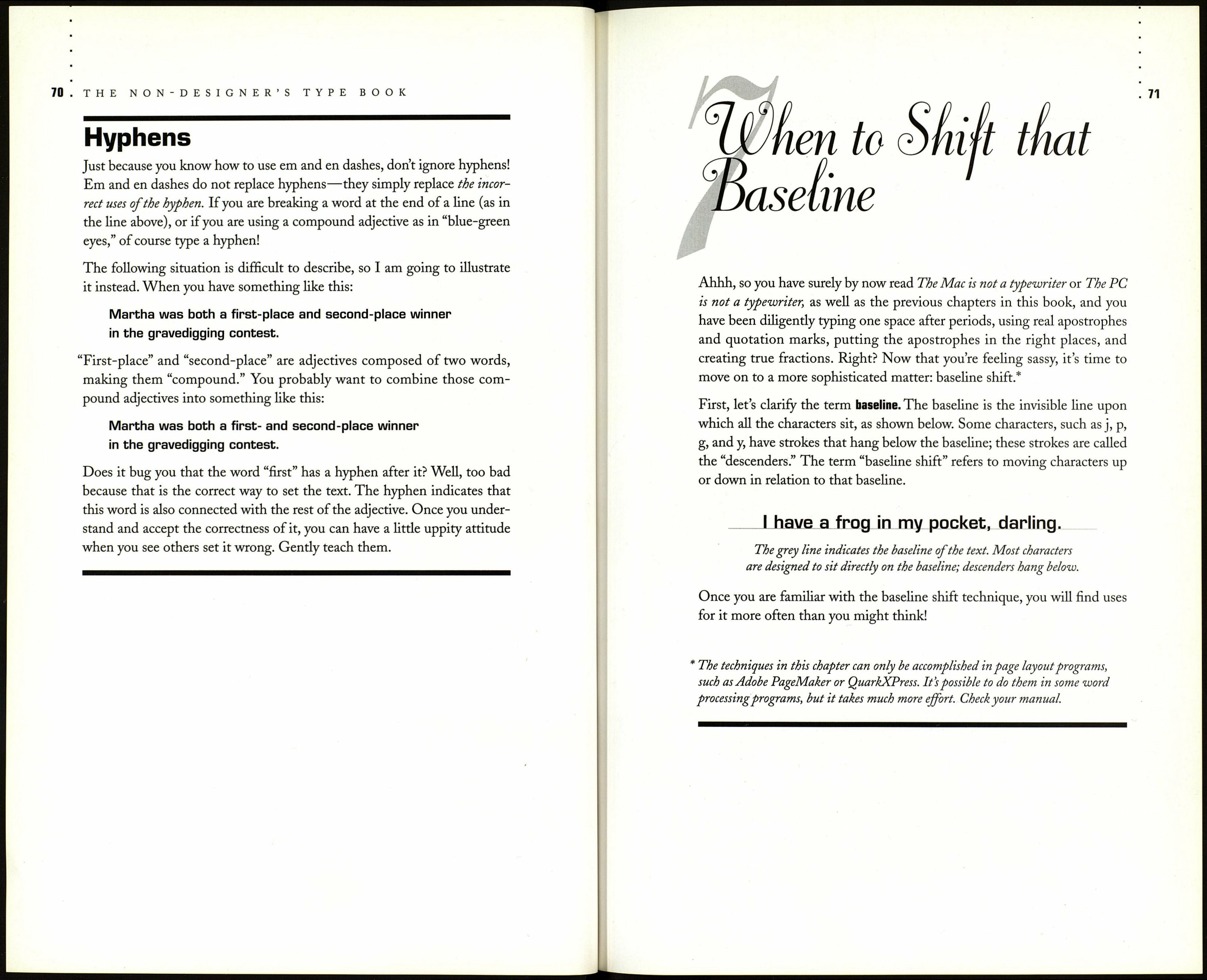 Text within parentheses is like whispering ; text within commas is an aver¬
age statement; text within em dashes is more emphatic. The example below
illustrates this concept.

Use em dashes to set off a phrase that has a lot of commas in it—like this,
and thus, and so—to avoid confusing the reader.

Or mark an abrupt change in thought or sentence structure—how does
this look—with an em dash.

Em dashes are set with no space before or after the dash. This bothers
many people, though, because the dash tends to bump into the letters.
So add a tiny bit of space on either side by kerning (see Chapter 14 on
Kerning). But if you insert an entire word space before and after the dash,
you exacerbate the interruption in the flow of text.

The origins of printing are
almost as obscure as the origins
of writing, and for much the
same reason — its inventors
never used their new medium
to record the process.
Sean Morrison

When there is a space on either side
of an em dash, it creates a disturbing
gap in the text and calls too much
attention to itself. Typeface is
Memphis Light.

The origins of printing are
almost as obscure as the origins
of writing, and for much the
same reason—its inventors
never used their new medium
to record the process.

Kern a little bit of space on either
side of the em dash, if necessary,
just enough so it doesn't bump
into the letters.

The most common use of an en dash is to indicate a duration. Read the
sentence; if you substitute the word "to" for the dash, then the proper mark
is an en dash. Actually, in a real sentence I would spell out the word "to,"
but you will often find occasions outside of sentences where an en dash is
the appropriate mark.

All children ages 3-10 are welcome to attend
the crawdad party from 6-8 P.M. every Monday
from September-November.

Also use an en dash instead of a hyphen in a compound adjective when one
of the items is two words or a hyphenated word.

She took the New York-London plane to be at the opening
of the post-Vietnam War presentation.

The Internet cafe was filled with the over-sixty-five crowd.