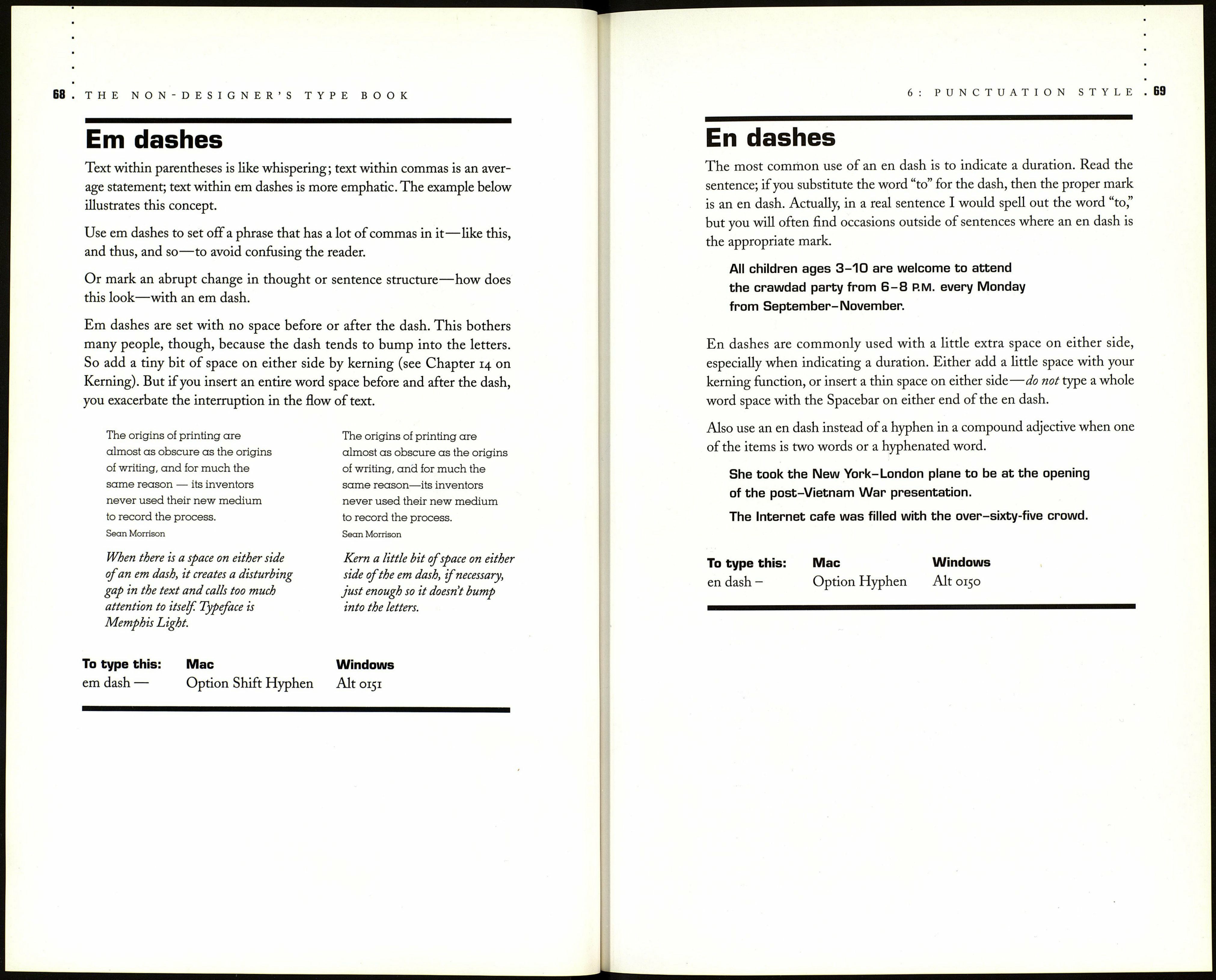 In contractions and informal writing, the apostrophe belongs where the
letter is missing. Remember that simple principle and you will never go
wrong. I repeat myself on this because it is so important, yet the misuse of
the apostrophe is rampant and annoying.

In case you missed it: One of the two most common mistakes in typogra¬
phy is with the word and between words such as Mom 'n' Pop or peaches 'n'

cream. Set the apostrophe where the letters are missing! If a letter or num¬
ber is missing at the beginning of a word, dont turn the apostrophe around so
it looks like an opening single quote. It should be an apostrophe.

The other most prevalent mistake in publications is in the word its. Do you
put an apostrophe in the word hers, or his, or theirs, or yours? No, of course
not. The word its, when possessive, is in the same category as hers, his, and
yours—there is no apostrophe! It's with an apostrophe always, always, al¬
ways, is a contraction for it is (or it has). Always.

The ellipsis character (the three dots: . . . ) is used to indicate where text
has been omitted from the original material. There is a character on your
keyboard for this (see below). But this character is too tight for professional
typographic standards. You can type a space between periods, but then it
might break at the end of a line and you would have one or two periods at
the beginning of the next line. Preferably, type a thin or en space before
and after each period (see the chart at the end of the book). If you can't
type thin or en spaces, as in QuarkXPress, kern the three periods open. If
you have an ellipsis at the end of a sentence, type a period after the ellipsis.

The style of the punctuation should match the style of the word it follows.
For instance, if a word followed by a comma is bold, then the comma itself
should also be bold. You may have a semicolon following italic words; the
semicolon should be italic. Follow the same principle for any style change.

She's willing (and able) and she'll be ready in a while.

She's willing (and I do believe she's able), but not ready.

She's willing (but not able) and will be ready in a while.

Don't worry if you at first think it looks a little odd to have a big fat bold
period or comma in the middle of your paragraph, like so. This is one of
those things you get used to and then the wrong way soon begins to look
glaringly wrong. It's like knowing that the pronunciation of the word forte
(as in "Pickle-making is my forte") is really "fort," not "fortay" The word

"fortay" means "loud, forcefully," as in music notation. At first it sounds
wrong to say "fort," and you must have conviction to pronounce it properly
among others who assume you are wrong, since most people pronounce it
incorrectly. But once you accept that "fort" is the correct pronunciation,

"fortay" is wrong (unless you choose to use a dictionary that has succumbed
to popular pronunciation rather than correctness, which is what happens to
our language anyway). (Oh well.)