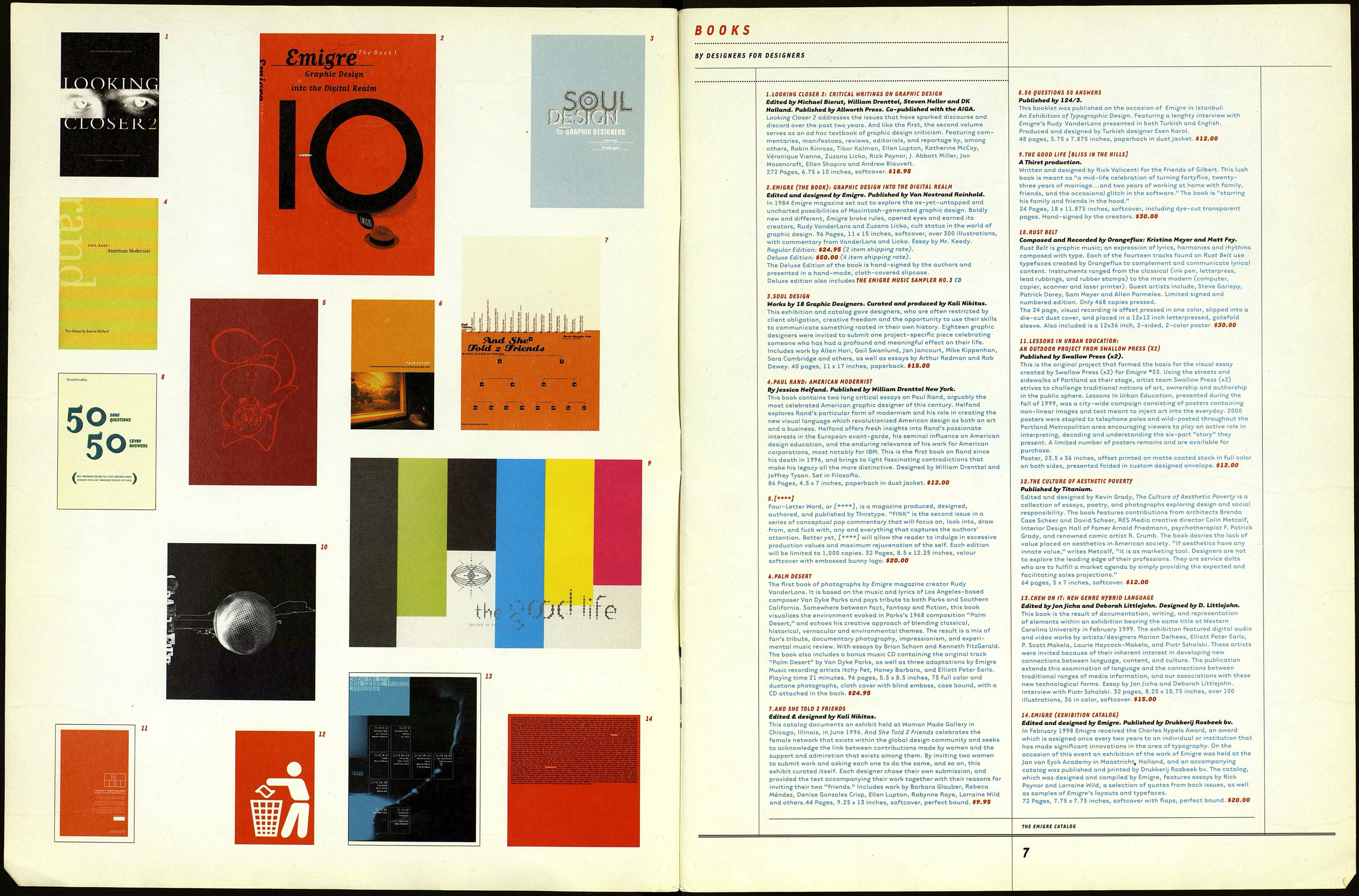 and Steve Tomasula. Rudy VanderLans talks with Daniel X. O'Neil and
Marc Nagtzaam. EMIGRE 38, The Authentic Issue, 1996, $50.00. Included
are typographic experiments by Susan LaPorte, Steve Tomasula, Daniel X.
O'Neil, Matt Dinerstein, Stephen Farrell, and Margo Johnson. John Downer
and Rudy VanderLans discuss aspects of digital type design. House
Industries gives a behind the scenes look at their foundry of types.
Andrew Blauvelt ponders how the "Death of the Author" has given rise to
the dubious status of the "Designer as Auteur." I EMIGRE 39, Graphic
Design and the Next Big Thing, 1996, $7.95. Lorraine Wild gives an
overview of graphic design education and the way it is currently being
challenged by new media. Kenneth FitzGerald, reviews Elliott Earls's CD
Throwing Apples at the Sun. Putch Tu discusses geeks, freaks, cyborgs,
blenders, power tools, remote controls, and other nervous machines, and
how it all relates to graphic design. Carl Francis DiSalvo reviews Avital
Ronell's The Telephone Book. Paul Roberts lends us his insights as writers
bemoan loss of authorial control. Diane Cromala reviews Sven Birkerts's
book The Gutenberg Elegies. I EMIGRE 40, The Info Perplex, 1996, $7.95.
Edited by Andrew Blauvelt. Andrew Blauvelt looks at the hybrid and
mutable nature of the information event and asks "Where is the pleasure
in information design?" Teal Triggs meets John Warwicker of the London-
based collective Tomato. Diane Gromala examines the relationships
among the body, design, and the impact of technology. Anne Burdick re¬
views Jay David Bolter's book Writing Space. Frances Butler takes an
historical look at the structures and spaces devised for holding and
shaping meaning. I EMIGRE 41, The Magazine Issue, 1997, $7.98. When it
comes to magazines, which ones do we remember best, and what is it that
makes them so memorable? This is the question we posed to Martin
Venezky, Nancy Bonnell-Kangas, Daniel X O'Neil, Denise Gonzales Crisp,
and Kenneth FitzGerald. Also contains a 32-page facsimile of the
(possibly fictional) magazine project entitled The News of the Whirled, by
Kenneth FitzGerald. I EMIGRE 42, The Mercantile Issue, 1997, $50.00.
Articles include "Design(er) Type or Graphic Designers Who Design Type¬
faces (and the Typographers Who Forgive Them)" by Mr. Keedy. "Decay
and Renewal in Typeface Markets: Variations on a Typographical Theme,"
by Alan Marshall. "On Classifying Type" byjonathan Hoefler, plus "Walking
in the City," a review by Andrew Blauvelt of the graphic design exhibition
Mixing Messages : Graphic Design and Contemporary Culture. I EMIGRE 43,
Designers are People Too, 1997, $7.95. jeffery Keedy lets it rip in
"Greasing the Wheels of Capitalism with Style and Taste or the 'Profes-
sionalization' of Graphic Design in America," while Denise Gonzales-Crisp
looks at what designers (can) do to circumvent the traditional and
often compromising client/designer relationship. Teal Triggs and Sian
Cook, of the London-based Women's Design + Research Unit, revisit the
seemingly unchanged role of women as both subjects and objects in
graphic design. And Rudy VanderLans takes a closer look at type as
intellectual property. Includes pull-out poster introducing Zuzana Licko's
new typeface family Base Monospace. I EMIGRE 44, Design as Content,

1997, $7.95. Emigre no.44 takes an in depth look at design book
publishing by reviewing four recently published books; 61: Wew
Dimensions in Graphic Design, a selection of graphic design work from
around the world compiled by Neville Brody and Lewis Blackwell; Pure
Fuei, authored by the London-based design group Fuel; Ray Gun — Out of
Control, a celebration of the magazines published by Marvin Scott Jarrett,
and Mind Grenades: Manifestos from the Future, reprints of the opening
spreads from Wired magazine. Essays by Diane Gromala, Kenneth
FitzGerald, Shawn Wolfe, Bill Gubbins and Rudy VanderLans. I EMIGRE 45,
Untitled, 1998, $7.95. This issue features interviews with members of the
Dutch graphic design team LUST, who discuss their form-follows-process
approach to graphic design, and Peter Maybury, the Dublin-based
designer for cultural institutions such as Code magazine and the Douglas
Hyde gallery. Also, Chuck Byrne looks at the experimental typographic
print work of San Francisco-based letterpress printer and designer Jack
Stauffacher, while Andrew Blauvelt, in his essay "Head to Hand," does

a "deep reading" of the book designs of Lorraine Wild, the Los Angeles-
based designer, writer, critic and educator. I EMIGRE 46, Fanzines and the
CuttureofD.l.y., 1998, $7.95. As more and more designers start their
own magazines and become initiators of graphic products, instead
of solving "problems" for others, we thought it might be inspirational to
take a look at the world of fanzines and other graphic Do-it-yourself
projects. Teal Triggs gives us a history of the British fanzine, while Bill
Gubbins, does his take on their US counterpart. Ella Cross, picks her
favorite zines, and Daniel X. O'Neil delivers nothing less than a glimpse
of the future of fanzines. Plus, the inside story of Heckler, a zine gone big
time and back. Plus much, much more. I EMIGRE 47, Relocating Design,

1998, $7.95. Jeffery Keedy, in "Graphic Design in the Postmodern Era,"
points out the general willingness of designers to have their "values and
ideals be dictated by the commercial marketplace." In her article "The
Macramé of Resistance," Lorraine Wild suggests ways to "salvage graphic
design in the face of the juggernaut of technology and the demands of
the market." Also, an interview with Michael Shea who discusses the
disconnect that exists between theory and practice, and the maker and
reader, in graphic design. Plus more. I EMIGRE 48, Untitled II, 1998,
$7.95. Mother jones magazine decided to upgrade their image in 1998
and Emigre gets the inside scoop on the politics of the redesign from art
director Rhonda Rubinstein. Then, graphic designer Stuart Bailey allows

us a peek behind the scenes in the creation of the "Werkplaats
Typografie," a brand new experimental graduate design program based
in Arnhem, Holland. Also, Kenneth FitzGerald, in his essay "Skilling Saws
and Absorbent Catalogs," points out how art and design have come to rely
on each other, and how graphic designers may learn from the symbiosis.
Also, enclosed as a special 32-page addendum, is "A Brief History of Type
Design at The Apollo Program," introducing seven new fonts produced and
designed by Elliott Peter Earls. I EMIGRE 49, The Everything is for Sale
Issue, 1999, 7.95. In 1964, graphic designer Ken Garland and 21
colleagues issued the "First Things First" manifesto. It was a call to arms
for graphic designers; an encouragement, os Garland put it, "to think
about the opportunities for graphic design and photography outside
advertising." Although written more than 30 years ago, the "First Things
First" manifesto strikes us as being more relevant and timely than ever,
so we have reprinted it here, and built an entire issue around it. Articles
by Thomas Frank (The Baffler), Carrie McLaren (Stay Free!), Jonathan Dee
(Harper's), Kalle Lasn (Adbusters), and Kevin Fenton. Also interviews with
Kalle Lasn and Chris Dixon, respectively the editor and art director of
Adbusters magazine. I EMIGRE 50, Think Ink, 1999, 7.95. Emigre
celebrates the publication of its 50th issue with a return to a more
visually oriented approach reminiscent of its early days of publication.
Designer/writer Shawn Wolfe gives us an overview of BeatKit, a company
he started in the early 80s with the purpose of questioning design's
function as spectacle/commodity. Elliott Earls of The Apollo Program
renders a series of highly subjective portraits of his all-time heroes.
Two new Emigre typefaces are introduced: Cholla, designed by Sibylle
Hagmann, is shown in a series of layouts created by Hagmann with text
by Denise Gonzales Crisp. Vendetta is a new series of Venetian old style
printing types designed by John Downer. Vendetta is first used in this
issue of Emigre in an adaptation of the 1920 book Our Araby: Palm Springs
and the Garden of the Sun by J. Smeaton Chase, with layouts and
photography by Rudy VanderLans. Bill Gubbins invites us to his home for
an hilarious chat about printing inks. And Martin Venezky presents his
Cranbrook thesis, Notes an the West, a visual Odyssey dealing with the
iconography of the Old West. I EMIGRE 51, Summer 1999, 50.00. Graphic
designer Stephen Farrell and writer Steve Tomasula with J ¡won Son present
their third collaboration for Emigre titled "Inhabiting Forms: Visible
Citizens." Matt Owens explores the "creative endeavor" and its pitfalls in
a project titled "Deep End." Katherine McCoy, Lewis Blackwell and Philip
Meggs pay tribute in words and pictures to designer P. Scott Makela who
passed away in 1999. Rudy VanderLans presents "A Topography of the
California High Desert" featuring photographs of signs, posts, markers,
pointers and dwellings found in the Mojave desert. The project is enriched
with the poem "'81' Poop Hatch" by Don Van Vliet. Andreas Lauhoff offers
an extract of his MA project created at Central Saint Martins in England,
and Issue 51 features the newly re-issued First Things First manifesto with
an accompanying essay by Rick Poynor. I EMIGRE 52, Fail 1999, 50.00.
This issue starts off with the readers response to the First Things First
2000 manifesto. And, Emigre takes a look at the environmental impact
on Las Vegas of commercialism and no-limits architectural development.
Edward Bateman revisits The Deseret Alphabet, a radical typographic
experiment meant to reform the written English language, and commis¬
sioned nearly 150 years ago by Mormon prophet Brigham young. Bob
Dahlquist's haiku-like type poems, which usually litter his Sacramento
house in various stages of (dis)assemblage, found their way onto these
pages in a completed form presented as a visual documentary. From
Holland comes the work of the Experimental JetSet, who give us a dead¬
pan rundown on the World of Money as we approach the year 2000. And
Ryan McGinness, after recently publishing the critically acclaimed book
flatnessisgod, presents "selfsameness," a series of pages exploiting
his own persona I EMIGRE 53, Graphic Design Inel., 1999, 50.00.
Featuring the essay "Saving Advertising" by Jelly Helm which offers
suggestions on how advertising can regain its status as an honorable
and ethically sound profession. Also, Swallow Press (x2), present their
"Lessons in Urban Education," a city-wide poster campaign presenting a
non-linear series of images and text which encourage us to seek out and
find our own answers as we maneuver our way through public space. And
Cynthia Connolly presents a selection of photographs of Ice Machines. The
photographs are interspersed with the travel story titled "Likelihood" by
Lois Maffeo. I EMIGRE 54, The Last Wave, 2000, 7.95. A huge, heretofore
unseen graphic design collection was unearthed recently. No one knew
where exactly it came from, or whose collection it was. Over 250 pieces
of graphic design are shown, gathered from around the world. Most likely,
you have never seen these before, so check it out.

If your mailing label on the front cover of this catalog reads "LAST
ISSUE" or "ISSUES LEFT: 0" butyou would like to receive the next four
issues of Emigre for free, you must fill out the on-fine reply form.