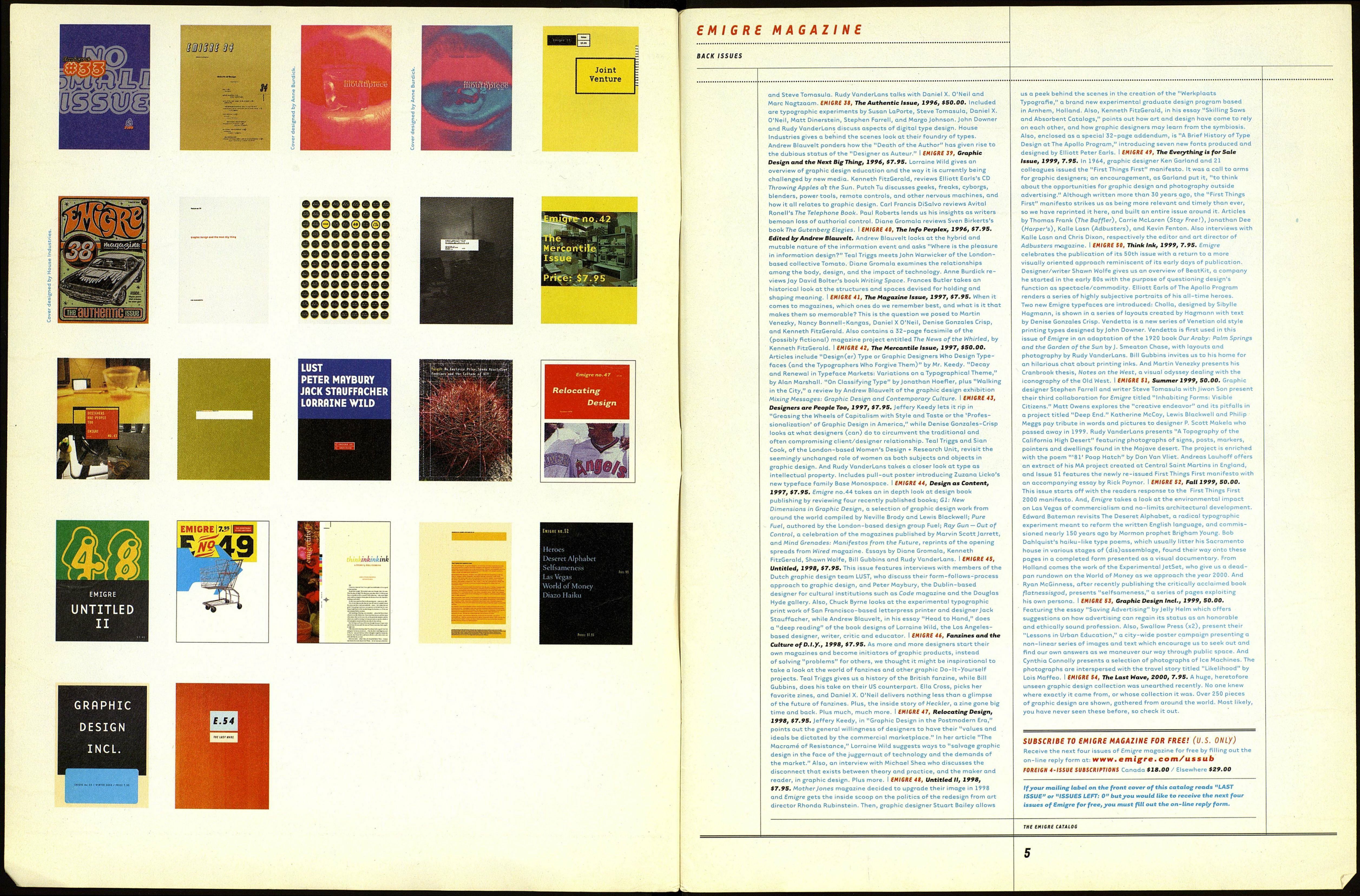 Issues 1 through 3г are approximately 11 ж 17 inches. In 1995, starting with issue 33, Emigre changed its usual
targe size to the more economical and reader friendly format of approximately 8. S x 11 inches.

Accounts, 1987, $50.00. Designed by five graphic designers. Each
designer produced a graphic documentation of personal travel
experiences. I EMIGRE 8, Alienation, 1987, $50.00. A photographic/
typographic experiment by Stefano Massei and Rudy VanderUans. The
issue features a mixture of type and image experimentations inspired by
television and advertising language and imagery. I EMIGRE 9, AAD, 1988,
SotdOut. I EMIGRE 10, 1988, Sold Out. I EMIGRE 11, Ambition / Fear,
1989, $50.00. Featuring interviews with 15 graphic designers from around
the world. The interviews are centered around the initial response to the
introduction of the Macintosh computer. Conversations withjeffery
Keedy, April Greiman, Matthew Carter, Rick Valicenti, Malcolm Garrett,
Clement Mok, Max Kisman and others. I EMIGRE 12, PressTime!, 1989,
SoldOut. I EMIGRE 13, Redesigning Stereotypes, 1989, SotdOut. I EMIGRE
14, Heritage, 1990, SoldOut. I EMIGRE IS, Do you Read Me?, 1990, Sold
Out. I EMIGRE 16, Sound Design, 1990, SoldOut. I EMIGRE 17, Wise Guys,
1991, $50.00. This issue focuses on the work of graphic designers Edward
Fella and Piet Schreuders. Edward Fella practiced as a commercial artist
in Detroit, Michigan for 30 years before returning to study graphic design
at the Cranbrook Academy of Art. While at Cranbrook, and currently as
a teacher at Cal Arts, his idiosyncratic style has influenced many young
graphic designers throughout the United States. Piet Schreuders, a self-
taught graphic designer based in Amsterdam, Holland is best known for
his publication Furore and his booklet Lay In, Lay Out in which he accuses
the graphic design profession of being criminal. I EMIGRE 18, Type-Site,
1991, $50.00. Issue number 18 further explores the unknown possibilities
of type as an expressive/communicative medium. This issue features a
16 page typographic experiment by Paris-based designer Pierre di Sciullo.
The pages presented are an adaptation of several chapters from issue No.
8 of Qui? Resiste, ajournai published by Sciullo. Also included in this issue
is Beowolf; the first typeface generated with "Random Technology" by
Eric van Blokland and Just Van Rossum, who raise the question, is best
really better? Also featured is a special project created by London-based
graphic designer Phil Baines, titled "Clear Enough to Read," which is a
continuation of his St. Martin's School of Art thesis The Bauhaus Mistook
Legibility for Communication. I EMIGRE 19, Starting From Zero, 1991,
$50.00. After seeing numerous graphic innovators return to what design
critic Keith Robertson refers to as "the safe refuge of the International
Style," Emigre felt inclined to take a closer look. Does all experimentation
in graphic design eventually lead to the simplification of graphic design?
Are the graphic designers who concern themselves with complex solutions
merely slow learners who try out the wildest schemes only to come to one
conclusion, that less is more? These are some of the questions that are
raised in this issue of Emigre. Featuring conversations with Hard Werken's
Henk Elenga and students and faculty at Cranbrook Academy of Art.
Articles by John Weber and design critic Keith Robertson and more.
EMIGRE 20, Expatriates, 1991, $50.00. This issue features interviews with
expatriates Robert Nakata and Allen Hori. Respectively Canadian and
American, both designers left their home countries to settle down in
Holland. One worked at Hard Werken, the other at Studio Dumbar.
Includes two 22" x 32" posters designed by Hori and Nakata. I EMIGRE 21,
New Faces, 1992, $7.95. Edited by Jeffery Keedy. Featured in this issue
is the work of graduate and under graduate graphic design students at
California Institute of the Arts in Valencia, California. This issue consists
of actual school assignments whose mechanical parameters were slightly
altered to fit the page size and printing restrictions of Emigre magazine.
The student projects featured include interpretations of critical writings
in graphic design, both visually and verbally, as well as projects ranging
from typeface designs to the design of the cover of Emigre magazine,
EMIGRE 22, Teach, 1992, $7.95. Here we focus on the work of London-
based graphic designer and teacher Nick Bell. Introducing two new con¬
ceptual typefaces. One is Zelig "a typeface with the uncanny chameleon¬
like ability to change its appearance to something very similar to what¬
ever typeface it is placed next to." and Psycho "...a typeface defined
more by its use, than by the design and consistency of each of its
individual units." Psycho will be presented as a special insert which was
hand-produced by Nick Bell and his students at The London College of
Printing. An in-depth interview with Nick Bell will accompany and
elucidate a sampling of briefs he created for his teaching at The London
College of Printing. I EMIGRE 23, Culprits, 1992, $50.00. Introducing
typeface designs and writings by Jonathan Barnbrook (England), Miles
Newlyn (England), Zuzana Licko (USA), Barry Deck (USA) and Frank Heine
(Germany). Featuring the essay titled "Legible?" by Gerard Unger
(Holland) in which this noted Dutch type designer eloquently explains
why there will always be о need for new typefaces. Also, bound into this
issue is an interview/poster project designed and produced by P. Scott
Makela (USA) whose debut cd titled Commbine, by his studio project
Audioafterbirth, was released on the Emigre Music label. I EMIGRE 24,
Neomania, 1992, $50.00. And then there was Ray Gun. Founded by
former Creem publisher Marvin Jarrett, this se If-proclaimed "Bible of
music &. style," arises out of the ashes of the cultzine Seach Culture, and

once again teams up B.C. 's editor Neil Fe i ne m an with graphic designer
David Carson. Find out what caused the rise and fall of Beach Culture
magazine and get a behind the scenes look at the raising of Ray Gun.
Featuring lengthy interviews with publisher Marvin Jarrett and editor Neil
Feineman. Also featured is the essay "Neomania," Written by Anne
Burdick. I EMIGRE 2b. Made in Holland, 1993, Sold Out. I EMIGRE 26, Alt
Fired Up, 1993, $7.95. Celebrating its 10th year of publication, with issue
26 Emigre continues to highlight the experimental spirit that lurks within
the field of graphic design. Featuring an in-depth interview with THIRST'S
Rick Valicenti, an overview of the stellar typeface production of Italian
designer Aldo Novarese, articles on white space as "an appropriated
formula; a code of acknowledged good taste," copyrights and much more.
EMIGRE 27, David Carson, 1993, $50.00. This issue features a lengthy
conversation with graphic designer David Carson. Known for his art
direction and design work on such notable and influential culture tabs as
Beach Culture and Ray Gun, Carson answers questions ranging from the
perceived (il)legibility of his work, personal experimentation, type design
and design competitions, while firing off a few good questions himself.
EMIGRE 28, Broadcast, 1993, $7.95. Edited and designed by Gait
Swantund. This Cal Arts graduate talks with her pals about life after
design school. Featuring fellowgrads Sue LaPorte, Barbara Glauber and
Somi Kim (ReVerb), as well as an interview with the current art director
at The Walker Art Center, Laurie Haycock Makela. This issue is proof that
there are living designers who find real life applications for their grad
school design experiments without compromising personal preference.
EMIGRE 29, The Designers Republic, 1994, Sold Out. I EMIGRE 30, Fallout,
1994, $7.95. Steven Heller's article "The Cult of the Ugly," which was
published in the British design magazine Eye, received more response
than any other article published in Eye. It hit a nerve with its readers and
subsequently created an intellectual fallout of sorts that cast quite a
shadow. For this issue of Emigre, Michael Dooley traveled to New york to
meet and interview Heller, one of America's most prolific graphic design
critics, to talk about the Eye article and other topics concerning graphic
design. In addition Dooley spoke with Edward Fella, Jeffery Keedy and
David Shields, three designers whose work was among the pieces selected
by Eye as exemplary of "Ugly." I EMIGRE 31, Raising Voices, 1994, $7.95.
If the future of graphic design is wide open, then nowhere are the
challenges and responsibilities of how to deal with this ever-changing
field greater than within design education. How to create a design *
curriculum that would sufficiently prepare a design student for life after
school, as we move into the next millennium, is a hotly debated topic.
This issue hopes to uncover what it is that makes the four featured young
design educators tick, and how they each deal with the complexities and
challenges of teaching. Interviews with Diane Gromala, Kali Nikitas,
Michael Rock and Andrew Blauvelt. I EMIGRE 32, Essays, Texts and Other
Writings about Graphic Design, 1994, $7.95. This issue focuses on
graphic design as a significant force within culture, politics and society.
Writings include essays by Dutch philosopher and design critic Hugues С.
Boekraad, design critic and teacher Andrew Blauvelt, type designer
Zuzana Licko, and others. I EMIGRE 33, No Smalt Issue, 1995, $7.95.
Andrew Blauvelt offers us Part 2 of his essay "In and Around: Cultures of
Design and the Design of Cultures." Steven Heller gives us a sober analysis
of the New Design Discourse in his article "Design is Hell." Toronto writer
and self-described "typography Queen" Joe Clark answers the question
whether the influence of the text-based art of Barbara Kruger and Jenny
Hölzer on the mainstream has made pop culture richer. And, Mr. Keedy
traveled to London to interview Rick Poynor, the founder and former
editor of Eye magazine. I EMIGRE 34, The Rebirth of Design, 1995, $7.95.
Andrew Blauvelt, Putch Tu and Victor Margolin each take an in depth look
at Dan Friedman's book Radical Modernism. Anne Burdick and Louise
Sandhaus review Robin Kinross's books Modern Typography and Fellow
Readers. Jeffery Keedy explores the relationship between graphic design
and Modernist ideologies. Rudy VanderLans ponders the commodificatton
of graphic design experiments. Matt Owens gives us a design student's
look at the contemporary state of graphic design. I EMIGRE 35,
Mouthpiece, 1995, $7.95. Edited and art directed by Anne Burdick. This
issue presents an eclectic mix of voices discussing what happens when
the worlds of writing and design coincide. Featuring Johanna Drucker on
the future of writing. Adriano Pedrosa and Michael Worthington discuss
the birth of the designer as auteur. Andrew Blauvelt and Joan i Spadaro
challenge the primacy of the verbal. Kevin Mount provides excerpts from
imaginary books, and Denise Gonzales Crisp discusses the book Looking
Closer. I EMIGRE 36, Mouthpiece 2, 1995, $7.95. Edited and art directed
by Anne Burdick. Louise Sandhaus conducts a verbal/visual exploration
of the digital essay. Brian Schorn introduces OULIPO (the workshop of
potential literature). Anne Bush writes about the history of the critic.
Stuart McKee explores the relationship between writingand community
formation. Felix Janssens extols the need to reconsider the form of the
book. Gérard Mermoz investigates the functions of text as they are given
typographic form. And much more... I EMIGRE 37, Joint Venture, 1996,
$7.95. This issue is about collaboration, writing, intellectual property,
entrepreneurialism, poetry, authorship, self-publishing, reading and
everything else that design is made of, but this time we look at it from the
perspective of a group of artists that includes two writers, one graphic
designer and one visual artist. Anne Burdick interviews Stephen Farrell