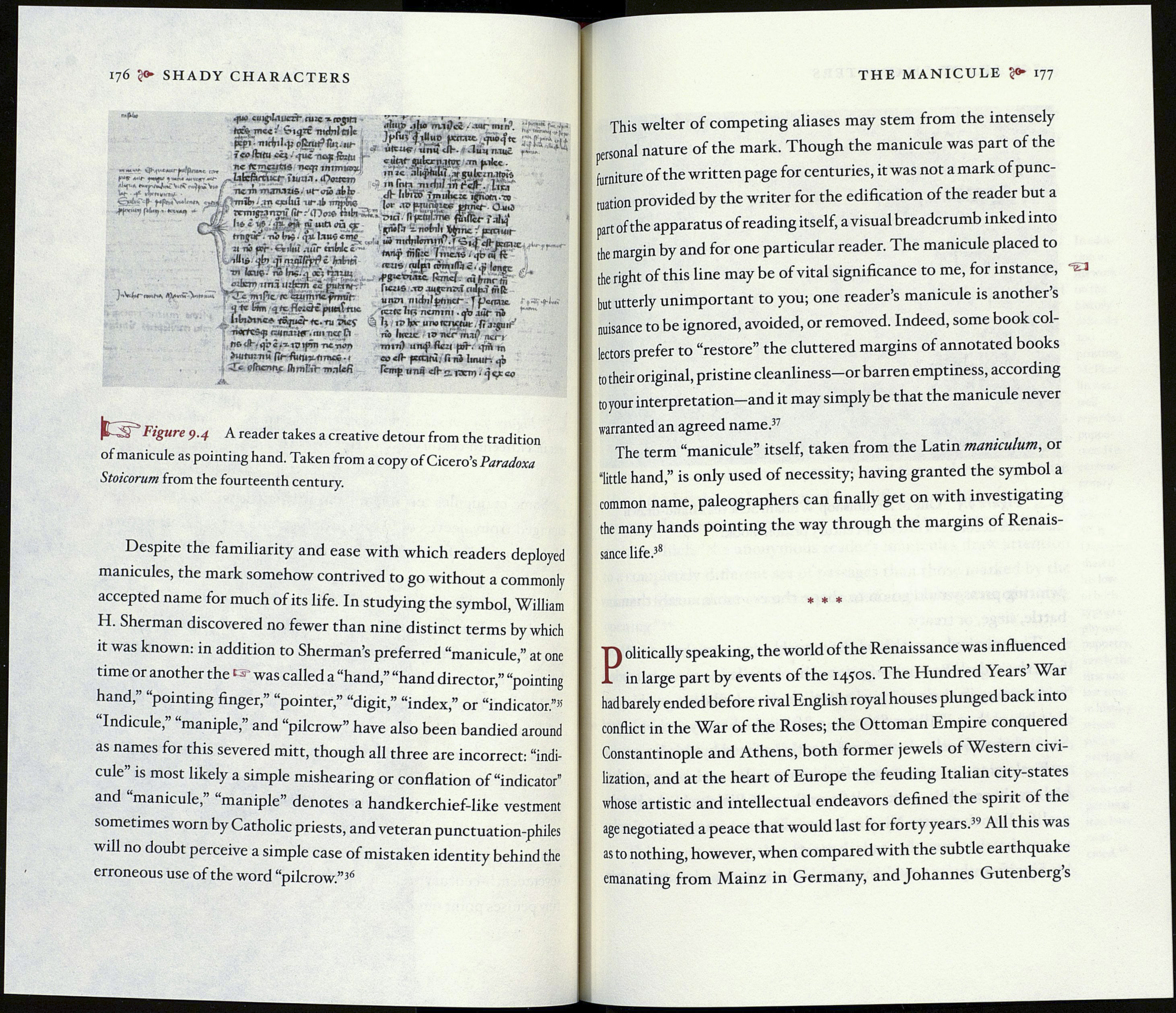 çure 9.4 A reader takes a creative detour from the tradition
of manicule as pointing hand. Taken from a copy of Cicero’s Paradoxa
Stoicorum from the fourteenth century.

Despite the familiarity and ease with which readers deployed
manicules, the mark somehow contrived to go without a commonly
accepted name for much of its life. In studying the symbol, William
H. Sherman discovered no fewer than nine distinct terms by which
it was known: in addition to Sherman’s preferred “manicule,” at one
time or another the ra* was called a “hand,” “hand director,” “pointing
hand,” “pointing finger,” “pointer,” “digit,” “index,” or “indicator.”«
Indicule, maniple, and pilcrow” have also been bandied around
as names for this severed mitt, though all three are incorrect: “indi¬
cule” is most likely a simple mishearing or conflation of “indicator”
and “manicule,” “maniple” denotes a handkerchief-like vestment
sometimes worn by Catholic priests, and veteran punctuation-philes
will no doubt perceive a simple case of mistaken identity behind the
erroneous use of the word “pilcrow.”36

This welter of competing aliases may stem from the intensely
personal nature of the mark. Though the manicule was part of the
furniture of the written page for centuries, it was not a mark of punc¬
tuation provided by the writer for the edification of the reader but a
part of the apparatus of reading itself, a visual breadcrumb inked into
the margin by and for one particular reader. The manicule placed to
the right of this line may be of vital significance to me, for instance, ' ¿ a
but utterly unimportant to you; one reader’s manicule is another’s
nuisance to be ignored, avoided, or removed. Indeed, some book col¬
lectors prefer to “restore” the cluttered margins of annotated books
to their original, pristine cleanliness-or barren emptiness, according
toyourinterpretation-and it may simply be that the manicule never

The term “manicule” itself, taken from the Latin maniculum, or
“little hand,” is only used of necessity; having granted the symbol a
common name, paleographers can finally get on with investigating
the many hands pointing the way through the margins of Renais¬
sance life.38

Politically speaking, the world of the Renaissance was influenced
in large part by events of the 1450s. The Hundred Years War
had barely ended before rival English royal houses plunged back into
conflict in the War of the Roses; the Ottoman Empire conquered
Constantinople and Athens, both former jewels of Western civi¬
lization, and at the heart of Europe the feuding Italian city-states
whose artistic and intellectual endeavors defined the spirit of the
age negotiated a peace that would last for forty years.39 All this was
as to nothing, however, when compared with the subtle earthquake
emanating from Mainz in Germany, and Johannes Gutenberg s